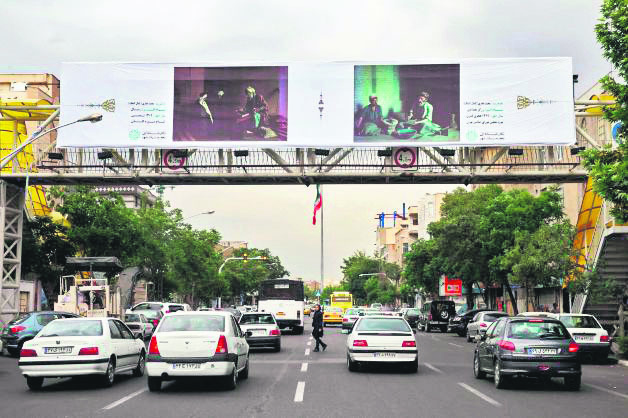 by Associated Press May 14, 2015 12:00 am
In an unusual move by Tehran's mayor, hundreds of copies of famous artworks both of world masters and Iranian artists have been plastered on some 1,500 billboards across the city, transforming the Iranian capital into a gigantic, open-air exhibition.

The 10-day project, which ends Friday, has stirred both appreciation and criticism. But whether people like it or not, the message is simple, according to Ehsun Fathipour.

"It says Iranians are art lovers, too," says the 57-year-old Tehran businessman. There is plenty to look at from Claude Monet's iconic Rouen Cathedral, Rembrandt's Landscape with a Stone Bridge and Mark Tansey's 1981 work, The Innocent Eye Test, to the 18th century Flowering Plants in Autumn, attributed to Japanese painter Ogata Korin.

In a city of 9 million people, 200 copies of works by world masters vie for attention along with 500 works of Iranian artists, such as Still Life by Iranian painter Bahman Mohasses, which is in Tehran's Arjantin Square. In Jomhouri Street, just a few blocks from the office of Supreme Leader Ayatollah Ali Khamenei, known for his love of the arts, stands a copy of the 19th century Indian Fisherman by German Albert Bierstadt.

The copies beam down from the city-owned billboards along key throughways, from overpasses and from main intersections and squares. The project was the brainchild of Mayor Mohammad Bagher Qalibaf a former Revolutionary Guard commander who twice lost his bid to become Iran's president, first in 2005 and then in the 2013 presidential election, when he came second-place to Hassan Rouhani.

Qalibaf has built his reputation on a host of quality-of-life projects around Iran's capital, including parks, expanded subways lines and highways. But he also has faced accusations that he took part in past crackdowns against student protesters before becoming mayor in 2005.

Tehran municipality sponsored the exhibit, entitled "An Art Gallery the Size of the City," saying it wanted to bring art closer to the city's residents. It has had other usual projects in the past including converting a prison, a garrison and a slaughter house into a museum and galleries.

Jamal Kamyab, who runs the Tehran Beautification Agency, affiliated with the municipality, said the aim was to "improve the artistic literacy of the citizens" and decorate public areas.

Tehran-based analyst Saeed Leilaz said the project is likely Qalibaf's attempt to re-vamp his hard-line image while also courting the middle class' support possibly for the next election.

"It's a transition from a hard-line paradigm to a milder sphere, one that caters to the cultural needs of the middle class," Leilaz told The Associated Press.

Few among Iran's population of 80 million frequent galleries and museums, instead favoring shrines of religious figures and historical sites. From time to time, Iranian artists have also had their works banned, apparently for being deemed insulting to Islamic values.

In 2010, some 11 bronze statues of Iranian national heroes disappeared from Tehran's public parks. The statues were never recovered. At the time, officials said religious motives appeared to have been behind the theft, and authorities cancelled inauguration of more statues in the city.

Many like the billboards, like Sahar Nasiri, a 23-year-old student of Farsi literature. "The city is overwhelmed by advertisements the entire year, so this is a nice break," she said. Fathipour, the businessman, said he came back from one of his frequent trips abroad and these "fascinating" billboards were just there.

Movie actor Behzad Farahani told art website Banifilm.ir he saw "at least 20 good artworks ... thanks to the billboards." Pop singer Ali Ashabi said he hoped the idea would be emulated in other cities and perhaps subway stations to "improve people's culture."

At the Sadr intersection in northern Tehran, Hatam Bagheri occasionally looks up from his stall with strawberries at a larger-than-life copy of Edvard Munch's The Scream.

"I am illiterate, unfortunately. I do not understand this," says the fruit seller, in his 60s. Many young people stop to look, he added, so "it must mean it's important."

With a cartoon, pro-reform Shargh daily suggested the figure in The Scream is horrified at Tehran's often gridlocked traffic.

But art critic Reza Simorgh, who writes for the sq72.com news website, says drivers see the billboards for just a second or two and that the distraction can be a traffic hazard. "It's impossible to learn about sophisticated artwork while driving," he said.

Others have criticized the low quality of the copies, saying the harsh sunlight on some billboards does the artworks injustice.

Much of Iran's state-owned collection of priceless paintings by European greats such as Vincent Van Gogh, Pablo Picasso, Salvador Dali and Joan Miro, as well as American 20th century icons like Andy Warhol, Jasper Johns and Jackson Pollock were acquired during the reign of U.S.-backed Shah Reza Pahlavi.

After the shah was overthrown by followers of Ayatollah Ruhollah Khomeini during the 1979 Islamic Revolution, most of the art was locked up in the vaults of the Tehran Museum of Contemporary Art, only rarely emerging for brief public displays. Some works, like a semi-nude by Auguste Renoir, still have to see the light of day, banished by ruling clerics as examples of decadent Western culture. But for these 10 days at least, art has come out on Tehran billboards.
Last Update: May 14, 2015 11:39 pm
RELATED TOPICS