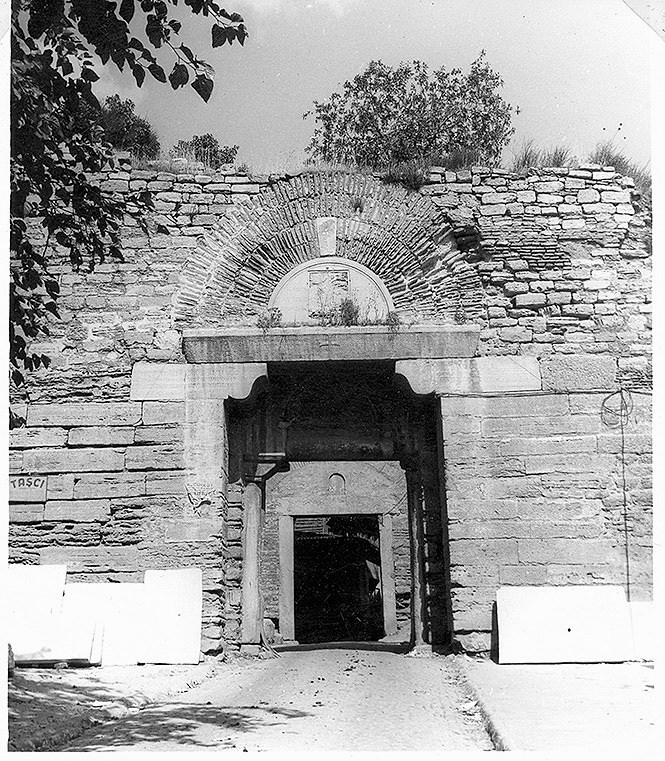 Surrounded by walls on land and in the sea, Istanbul has numerous gates, some of which date back around 8,500 years, with outstanding historical and architectural characteristics. Istanbul Kültür Inc. has compiled a photobook that contains detailed information about the gates of the city's walls

Istanbul Metropolitan Municipality's cultural enterprise, Istanbul Kültür Inc., has published a book that reveals the past and present state of the gates of Constantinople's and Istanbul's walls with photographs from the 1960s to the present. The book entitled "Istanbul Sur Kapıları" (The Gates of Istanbul's Walls) was prepared for publication by art historian İnci Tunay with the consultancy of Professor Semavi Eyice.

Prepared in light of the recent archaeological finds that rewound Istanbul's history back by 8,500 years, the book is the only study on the gates of Istanbul's walls.

The book features nearly 45 gates on the walls that encircle the old city of Istanbul. While some of the names of these gates were attributed to the districts where they stand, many of them are lost to the dusty pages of history. According to the book, Istanbul was protected by the walls that were built throughout the Byzantine period. People could only enter the city, which was surrounded by 20-kilometer-long walls, with special permission during the Byzantine and Ottoman imperial eras. The city was encircled with walls in order to protect it against any attack coming from outside, and it had many entrance gates watched over by guardians. Moreover, the gates were opened in the morning and completely closed in the evening.

Surrounded with walls by land and sea, Istanbul opened up to the outside world with gates of various sizes and architectural styles. The gates were placed on three sides of the city and classified as gates of the Marmara, the Golden Horn or land according to their locations. The "Yaldızlı" (Golden Gate), "Çatladıkapı" (Broken Gate), Gate of Belgrade, "Silivri" (Pege Gate), Gate of Rhegion (Gate of Mawlavi House) and "Topkapı" (Gate of St. Romanus) were characterized as land gates.

Each gate has a special meaning. The Gate of Mevlana was named after the dervish and Mawlavi houses that were located in the gardens near the gate. The gate was closed during the siege, however, but was opened after the conquest of Constantinople.

The Gate of Belgrade, which still maintains its significance in history as the second-biggest military gate, was very important during the Ottoman period. Following the conquest of Belgrade, Suleiman the Magnificent placed the craftsmen he brought back to Istanbul from his conquests near this gate, and this gate has been known as the Gate of Belgrade ever since. A stream flowed between two hills where the Edirnekapı and Topkapı gates are located. During the time of the Byzantine Empire, this stream was called Lykos but its name was later changed to Bayrampaşa. The stream bed is currently under Vatan Avenue. Standing between the gates of Yedikule and Silivri, the Gate of Belgrade was known as "Kapalı Kapı" (Closed Gate) under the rule of the Ottomans, as it was blocked up in the 13th century. The gate was later opened in 1886 to create a shortcut to the Greek Hospital. Only the lower parts of the arch over the Gate of Belgrade still stand today. The arch that was built with an array of bricks contained two angled piers on both sides. It is said that originally, there were two epitaphs announcing that Emperor Constantine and Theodosius I rebuilt the walls in 60 days. Today, these epitaphs no longer stand on the arch.

The most monumental part of the walls stands close to the Marmara Sea. It is generally believed that the Yaldızlıkapı complex was built by Theodosius I and it was originally a triumphal arch. During the excavations that were initiated in 1958 by the Directorate of the Istanbul Archaeology Museums' head of excavations and general manager, Rüstem Duyuran, archaeologists dug down four meters and determined that the lower section of the arch is attached to the city walls. However, Professor P. H. Schwinifurt claims this gate was built by Theodosius II in 413 B.C. based on the epitaph on the gate, which is written with golden letters on both sides of the arch. The epitaph on the gate says, "The one who built the gate with gold created a golden age."

"Çatladıkapı" (Broken Gate) gained its name from the tower that cracked during an earthquake in 1532. However, art historians disagree about the history and the region near Çatladıkapı. The gate was originally found by art historian Alexander van Millingen, and he claimed that the gate has preserved its original name since the Byzantine era. However, Peter Gylius claimed the gate was previously known as the Gate of Lions based on the marble lion statues in front of the gate. The gate was destroyed in 1960 and its epitaph was sent to the Istanbul Archaeology Museum.

The Byzantine historian Doukas claimed Emperor Constantine XI opened an underground door that had been bricked up and let the Ottomans inside the city during the conquest of Constantinople. Although the victory of the Ottomans was acknowledged around the known world, following the 19th century, phony art historians and archaeologists tried to degrade the conquest and conducted dubious research. Among these people, Mordtman and his son, as well as van Millingen, stand out. According to their allegations, the Turks conquered Istanbul not with their military genius and strength but by sneaking in through the open gates. Although these researchers searched for a place that fitted the description, they could not find it and had to point out a place named Kerkoporta on the walls. The place they identified is the section of wall that cuts 30 meters into the remains of Tekfur Saray (Palace of the Porphyrogenitus). They wanted to show a ruined wall to build up their false case. Although a gate was described near the Greek Cemetery, Ali Rıza Sağman said there was no such thing as the Kerkoporta Gate and it is just a legend in his book "Fatih Istanbul'u Ne Şekilde Aldı, cilt I-II" (How Mehmed II Conquered Constantinople, vol. I -II). The excavations that were later conducted between 1968 and 1969 also revealed no sign of a gate or material that would have been used in the construction of a gate.

Yaldızlıkapı, the Gate of Mawlavi House and Gate of Silivri: The three doors whose names are set

Following the conquest of Constantinople, the original names of the gates were quickly forgotten - as the names that were mentioned in the works of the wanderer were not compiled - and the gates were eventually attributed local names. Many writers referred to the gates by different names, so it is often hard to tell which name is original. However, the names of three gates are certainly known thanks to the epitaphs enshrined upon them: Yaldızlıkapı, the Gate of Rhegion (Gate of the Mawlavi House) and Silivri (Pege Gate).
Last Update: May 14, 2015 11:37 pm
RELATED TOPICS