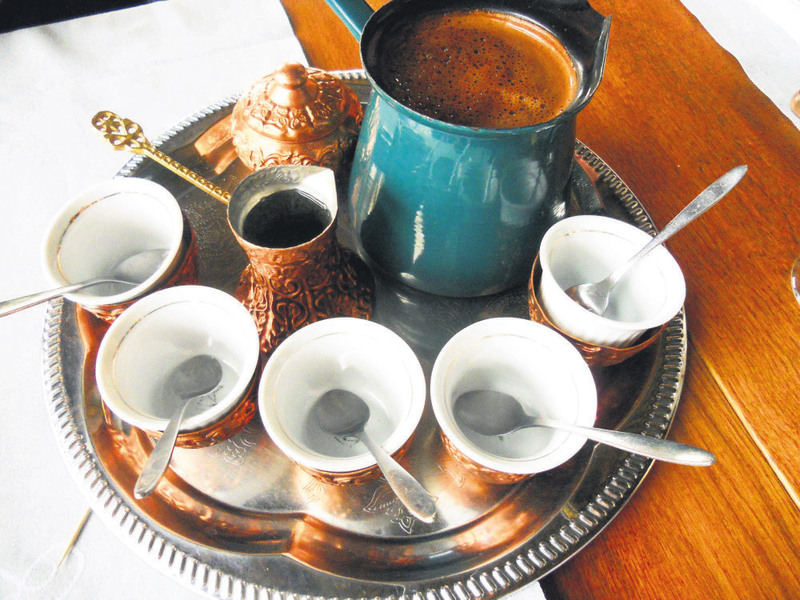 by Arda Sayıner May 15, 2015 12:00 am
The cultural cuisine of immigrants living in Turkey is another aspect that adds richness to our country. My favorite of these is Bosnian cuisine. Even though you can find shops called Bosnian patty shop in numerous districts of Istanbul, you can only eat a real Bosnian patty in Bayrampaşa. Avliya restaurant in Bayrampaşa is my favorite place, both because of its decoration and the delicacies they offer. The restaurant is decorated like old Bosnian houses that bear traces of the Ottomans, which is rather different from many other restaurants you visit. There are paintings illustrating Bosnia-Herzegovina and antique accordions on the walls. When it comes to the delicacies, you can find original beef-, spinach- or leek-filled Bosnian patties here. One of the favorite patties is the Bosnian meat pasty, which is served topped with yogurt mixed with crushed garlic. The name of this patty in Turkish is "mantı" because the slices are square-shaped. The main dishes of Bosnian cuisine are various stews. "Pljeskavica," also known as Bosnian kebab, is actually meatballs served with clotted cream and onion. The meat tastes and looks like tandoori kebab and is cooked in special copper pots over a coal fire. The pots are also covered with special copper lids. You can watch this original cooking method in some Bosnian restaurants. My favorite dish to eat before the main dish is a Bosnian cream called "soka," which is made by stuffing banana peppers with clotted cream and white cheese and stuffing the peppers in jars. Soka has a hot and sour taste and it can be eaten as an appetizer or for breakfast. I also recommend trying the beef jerky, which is a kind of Bosnian pastrami, as an entree. Its smoking method and taste is rather different than the Turkish "pastırma." The restaurant's most famous dessert is "traleçe" (tres leches), which is light and delicious. It pairs very well with traditional Bosnian coffee. I would like to compliment the Bosnian owner, Ercan Gül, for successfully opening and operating this concept restaurant. He helps visitors experience real Bosnian cuisine by using the original cooking method used in Bosnia-Herzegovina, decor that he collected from Bosnian villages and by hiring Bosnian chefs. If you prefer to have a similar experience by paying triple as much but in a more luxurious setting, you can check out Boşnjak restaurant on Nispetiye Street.

I discovered a product to carry our small, everyday wares: Ozpack. It may not be a new product, but I have noticed that it is widely used by celebrities and students. The creator of Ozpack is a Turkish industrial product designer, Osman Can Özcanlı, who completed his graduate education in Chicago. Ozpack first hit the market as a bag for students to carry their books and notebooks, but it was very innovative and immediately became fashionable. It is made with special material and you can carry many things including big books. Many students in İzmir use this bag and it is becoming more popular in other major cities. Mini Ozpack, on the other hand, can be used as a wallet and can carry important things like passports and cell phones. Ozpacks come in many different colors and patterns, which I think this is the main feature what makes it very attractive. Some of them are real pieces of art. It has a creative look, useful pockets and is easy-to-carry. As a Turk, I would like to compliment Özcanlı for creating a product frequently used by students and young professionals.

The stepchild of the Mediterranean Sea

One of the most famous holiday destinations in Turkey is undoubtedly Antalya. But as I have been spending time in its neighbor Mersin for a long time, I believe Mersin has greater tourism potential than Antalya due to its bays. Even though there are not as many big and luxurious hotels as there are in Antalya, the city definitely deserves to grow as a tourist destination because of its surrounding nature, history and delicacies. The most famous delicacy of the city is "tantuni." Tantuni is made by frying small bits of meat, onion, tomato and parsley together and served by wrapping this mixture with thin bread. You can eat tantuni all over Mersin. My favorite restaurant is Öz Mersin Tantuni. One of the most delicious local delicacies is a cookie called "kerebiç." These cookies come in walnut and pistachio varieties and are served with cream. In case you prefer a more indigestible dessert served with sherbet, my only recommendation would be "künefe." Emin Patisserie, located in downtown Mersin, is one of the oldest places to eat künefe. You should absolutely try this dessert made with halloumi cheese. In contrast to the ones you can eat in Istanbul, the cheese in the künefe made in Mersin is really generous. After eating this much it might be good to have a nice walk along the coast. The world-class marina in Mersin is big and provides a convenient place to walk along the coast in the evenings. Balkon Cafe near the marina is just the place for those who would like to enjoy a nargile. Moreover, the best places in Mersin to enjoy the sea are the Flamingo and Anamur Coasts. Hundreds of palm trees along the coast make you feel like you are in California or Florida. The Hilton Hotel in downtown Mersin on the coast is a classic. As the highest building in the Middle East when it was built when Turgut Özal was in office, the 52-story Radisson Hotel in Mersin Tower also has an ideal view. My favorite summer hotel is the Ulu Hotel in Anamur. It has a virgin beach and a first-class service. In short, Mersin should be the pearl of the Mediterranean Sea, not the stepchild.

Three most popular restaurants of the week

Three most popular venues of the week

Three most popular hotels of the week

1. CCR Hotel in Cappadocia
2. The House Hotel in Ortaköy
3. Lazzoni Hotel in Sütlüce