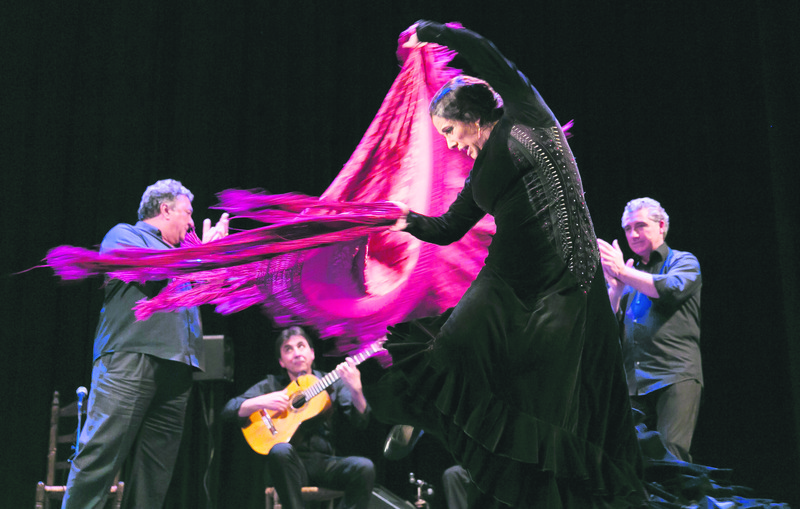 Spanish flamenco dancer Eva Yerbabuena will give the closing performance of İş Sanat's concert season with her multi-award-winning dance company on May 22. Spreading her deep flamenco sense with unique flare, Yerbabuena creates an authentic dance language that reflects her passions, fears, emotions and concerns

Eva Yerbabuena's dance company will perform at İş Sanat Performance Hall on May 22. Receiving critical acclaim from all around the world, Yerbabuena was the first flamenco dancer invited to perform at the Sydney Opera House. "She has the kind of artistry that appears once in a generation, if at all," wrote The Independent about the influential artist. So far, her dance company has performed in prestigious halls like the Theater de la Ville in Paris, Sadler's Wells and the Barbican in London, New York City Center, Teatro Municipal in Sao Paulo and Opera Düsseldorf. The group describes its philosophy as "the presentation of high-quality flamenco dance with good music and songs." In 2013, Yerbabuena received the Max Performing Arts Award for Best Female Dance Performer. Sweeping even more awards at other international platforms, the big flamenco star will mark her name with her dance company at İş Sanat.

Eva Yerbabuena formed her own dance company in 1998, bearing in mind Balzac's famous words "The best things in life are illusions." She wanted to spread a common dance language to the whole world among those who believe in her. For Yerbabuena, it is a way of preserving the illusions of flamenco. With her dance company, she wanted to break through to the world and create a deep flamenco concept no matter what difficulties they encountered. To achieve her target, she aimed to improve herself on many different levels. So far, their eight performances have received many awards. Taking the stage at reputable concert halls, the group is also working to introduce new, young talents in flamenco. Highly praised by international critics, Yerbabuena was born in Frankfurt in 1970. When she was two weeks old, she moved to live in her parent's town of Granada, Spain.

In 2011, she was invited to Wuppertal, Germany, as part of the 25th commemoration of legendary choreographer Pina Bausch. Yerbabuena participated in international flamenco festivals like the 17th Jerez Flamenco Festival and the 10th London Flamenco Festival. She studied choreography with such flamenco masters as Enrique El Canastero, Angustillas La Mona, Mariquilla and Mario Maya ve Johannes García. She won the Best Dancer Prize at Premios Flamenco - one of Spain's most prestigious awards in 1999, 2000 and 2011 - and she was also nominated at the National Dance Awards in previous years. With her young and talented flamenco dancers, Yerbabuena will be at İş Sanat for an unforgettable night. To mark the occasion, Daily Sabah conducted an interview with Yerbabuena to learn more about her life and career.

Daily Sabah: You're known for your unique approach to flamenco, mixing dance styles, but what do you love most about flamenco and making it different from other dance styles?

Eva Yerbabuena: Flamenco almost always gives me the ability to have live musicians on stage, and it is a very direct art that has the ability to create a transformation in people who interpret it. It's a very visceral, earthly art in and of itself, which has an impressive cultural mix.

DS: You began taking flamenco classes when you were 11. Do you remember when you developed a crush on flamenco for the first time?

EY: I was 12 when I attended a flamenco festival for the first time where there were live singers, dancers and a guitar. There I witnessed the amazing transformation of the artists when they came on stage. At that point, I decided that flamenco would be a perfect disguise for me to develop my personality, to find myself and relegate my shyness to the background.

DS: You're saying that emotion is so central to flamenco, but are you that expressive in your daily life too?

At home, with my family, I naturally express my emotions as they flow. However, when I am surrounded by people I don't know, my shyness reemerges. Only through flamenco have I managed to overcome that shyness and have come to communicate and connect with the audience as myself. After all, if emotions are not shown on stage, it is a totally different magic.

DS: I read that Carmen Amaya is one of your greatest inspirations? How do you describe her influence on your artistry?

EY: I met Carmen Amaya after suffering a professional disappointment at the beginning of my career. At that time, and after contemplating retiring, I got my hands on a video of Carmen. That was when I decided that no one but God could retire from flamenco. By watching the dance of Carmen Amaya, I saw the inner strength reflected that I needed at that time, accompanied by subtlety, packaging and form - hypnotic charm on the audience.

DS: You became the first flamenco artist nominated as the Best Female Dance Performer at the 2014 National Dance Awards in the U.K. How do you feel about the strong reaction to flamenco in the U.K?

EY: Flamenco has long had a presence in the U.K. It is an honor and a privilege for me to have this artistic recognition of myself and my work.

DS: You have been touring extensively all around the world and have so far performed at all the major flamenco festivals too. Where does flamenco have the most powerful audiences?

There is no place where there is a more powerful audience than another; it is true that the audience has the power to take you through your energy, unforgettable moments or moments that you want to forget. Certainly there are some cities whose memory I treasure, not only for the artistic side, but ones that, at the time, let you live and share with them, their culture, their customs and their ways.

DS: The energy between the audience and the artist is so critical for any performance, so what do you expect from the Istanbul audience?

I hope to be able to make them feel and not just analyze or try to understand flamenco. But above all, I hope the audience will enjoy it, as we will give them a very emotional performance.

This will be my first visit to Istanbul. Through friends, I have heard about the warmth of its people, their meals, the magic of its streets and its rich heritage. As Ahmet Rasim said, in Istanbul, "the beauty of the landscape is in its bitterness." I want to soak in each and every bitter pill and discover the beauty that I'm sure will emerge from every corner.
Last Update: May 19, 2015 11:48 pm
RELATED TOPICS