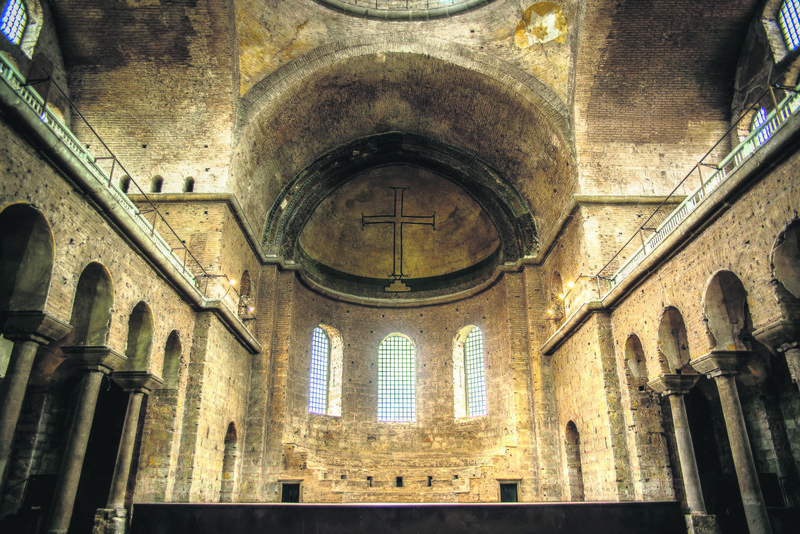 The Istanbul Project Coordination Unit is conducting a comprehensive project to protect 27 significant historical buildings in the city including the Hagia Irene Church, Topkapı Palace, the Archaelogy Museum and many others against disasters, especially earthquakes

To prepare multi-hazard risk assessment and fortification projects for possible earthquakes, the Istanbul Project Coordination Unit (IPCU), under the Istanbul Governorship conducted inventory studies of 176 buildings including 26 cultural complexes such as the Topkapı Palace, Yıldız Palace, the Archaeology Museum and the Hagia Irene church.

As part of Turkey's museology projects initiated in 1846, the first museum was established in the Hagia Irene in Istanbul. Later, the Istanbul Archaeology Museum opened under the head of renowned Ottoman-era painter Osman Hamdi Bey. Upon his death, Halit Erdem took his position and the Turkish and Islamic Arts Museum opened its doors. In 1924, the Topkapı Palace was converted into a museum. The Ethnography Museum of Ankara was established in 1928 followed by the Hagia Sophia in 1934.

Today, hundreds of museums exist in Turkey and over 2 million historic works are on display. Acting as a cultural bridge between the past and present, museums present the deep traces of history. Over a century, Turkey's history of museology has had many successful projects. In this regard, protection of cultural heritage plays an important role.

To fortify some of Istanbul's historic buildings, the IPCU has prepared projects and carried out an inventory under the supervision of the Culture and Tourism Ministry and the findings were transferred into a special database. How the Archaeology Museum's sub-buildings, Topkapı Palace's Mecidiye Mansion and the Hagia Irene would withstand an earthquake were assessed and necessary fortification projects have been prepared. Additionally, historic monuments, museum, administrative buildings, hospitals, educational buildings, palaces and other examples of civic architecture were assessed. Experts have conducted literary studies and field visits to identify hazard risks and listed the buildings with the highest priority.

The IPCU contributes to project development of cultural heritage protection. In previous months, the IPCU and the Italian Trade Commission (ITA) held the symposium, "Protection of Cultural Heritage: Restoration Practices in Turkey and Italy." During the symposium, cultural heritage protection projects were discussed with examples from Turkey and Italy. Related theories, restoration practices, innovative methods and materials on restoration projects were also discussed. The symposium also supports the Legislation on Protection and Restoration project started in collaboration with the IPCU, International Council on Monuments and Sites (ICOMOS) Turkey, Yıldız Technical University and Istanbul University. The two institutions also collaborated on the renovation project of the Şeyh Süleyman Mosque and the Med-Art Education project.

The IPCU was established under the Istanbul Governorship in 2006 with the motto: "We strengthen our future." The institution prepares fortification projects for public buildings including schools and hospitals against earthquakes in Istanbul. To avoid the possible risks of earthquakes, the fortification work was conducted under the Istanbul Seismic Risk Mitigation and Emergency Preparedness Project (ISMEP). So far, the IPCU has either rebuilt or fortified 1,175 public buildings and has given Safe Life Trainings to 825,000 people. Almost 6.5 million citizens have been offered training materials and general information. The IPCU efficiently analyzes earthquake risks and introduces example models for the rest of the world. It continues to contribute to the city's safety with innovative projects.
Last Update: May 19, 2015 11:33 pm
RELATED TOPICS