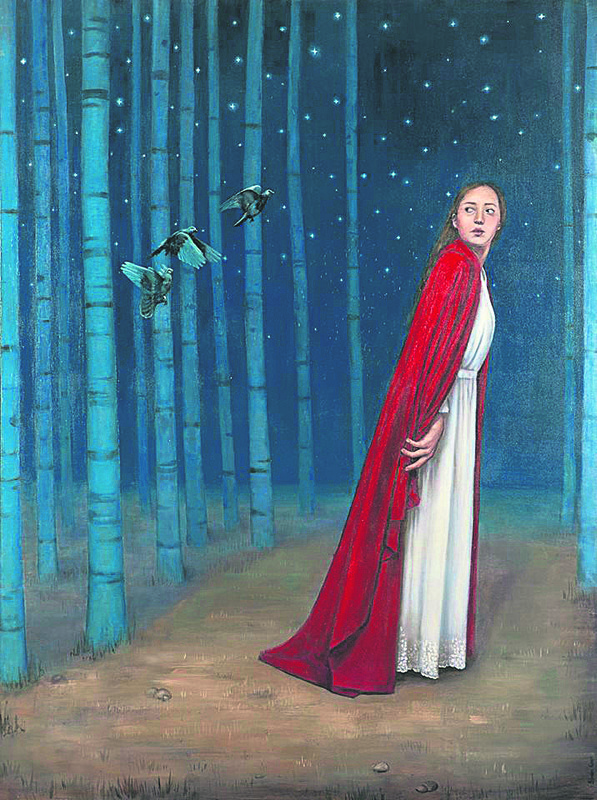 by Daily Sabah May 24, 2015 12:00 am
With its ravishingly decorated floors, the Armaggan store on Nuruosmaniye Street, which faces the Grand Bazaar on Istanbul's historical peninsula, invites visitors to the joint show of the Nuri İyem Painting Award winner Sinem Kaya and Koray Akay. Located on the store's third floor, the Armaggan Art and Design Gallery opened the seventh edition of its solo exhibitions on May 14 with works by the two young artists who engage with different media. The exhibition titled "Bir Varmış Bir Yokmuş" (Once Upon a Time) is a quest to illustrate how modern urban life makes humans more insecure, fearful and worried through well-known fairy tale characters like Little Red Riding Hood, the Little Match Girl, Gulliver's Travels and Alice in Wonderland. Visitors come across familiar figures, mostly individual women with strikingly noticeable appearances.

Kaya successfully distorts her fairytale characters and introduces them looking uneasy and worried. She describes her paintings as an attempt to "realize her childhood dream." To achieve her target, the young artist moves between fantasy and reality. One of her paintings depicts the little match girl standing on the moon, while another one illustrates Little Red Riding hood with scared eyes in a dark forest. The depictions of female figures are also an urge for viewers to question gender and the role of women. Among her paintings, the one featuring Gulliver from "Gulliver's Travels" triggers the feeling of solitude and imprisonment. Armaggan Curator Şanel Şan wrote in her exhibition review that Kaya reflects how humankind imprisons itself in a more secure and modern world for the sake of their ambitions and fears. Speaking to Daily Sabah, Kaya said, "The relationship between nature and humans and the accompanying feeling of isolation are what triggered me." Kaya chose well-known fairy tales as viewers can then more easily connect to her message. "I am trying to examine the dramatic notion of withdrawal by turning fairytale characters, which we generally associate with innocence and maybe even still want to become one of them, into modern-day humans unable to escape from his or her boredom and alienation," she added. Kaya said each painting features different messages. "The fearful appearance of some figures is related to their inability to adapt themselves to the place," she said. Holding both a bachelor's degree and a master's degree from the Mimar Sinan Fine Arts University Department of Painting, the artist has held two solo exhibitions and has participated in a number of group exhibitions so far. "Once Upon a Time" will run through June 6.
Last Update: May 24, 2015 9:46 pm
RELATED TOPICS