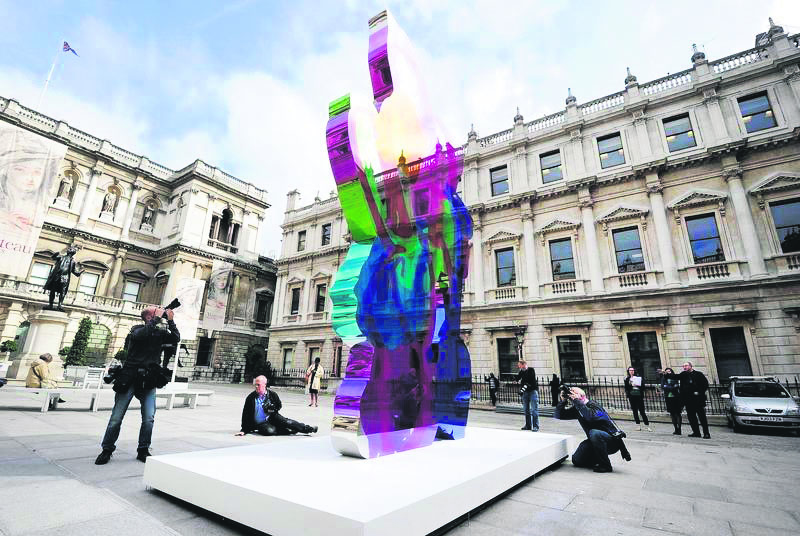 by May 24, 2015 12:00 am
A huge sculpture called "Coloring Book" by American artist Jeff Koons sold for 12 million euros ($13.2 million) at a star-studded charity auction near Cannes that raised more than 33 million euros for AIDS research. Sienna Miller, Jake Gyllenhaal, Diane Kruger, Michael Fassbender and Marion Cotillard were among the celebrities and millionaires at the annual amfAR "Cinema Against AIDS" event on Thursday night at the luxury Hotel de Cap-Eden-Roc in Antibes. At the gala, a highlight during the annual Cannes Film Festival, a work by British street artist Banksy, donated by actor Leonardo DiCaprio, fetched more than a signed Picasso.

"It's wonderful that you can gather a bunch of amazing, talented people and a bunch of wealthy people with a bunch of amazing artists and that they can come together and have fun and at the same time give back," actress Michelle Rodriguez said on the red carpet. "And now, we're getting closer to a cure," added Rodriguez, who stars in "The Fast and Furious" film franchise. The Banksy work fetched 1 million euros, nearly double the closing bid for Picasso's "L'Etreinte." Singer Andrea Bocelli also donated a dinner for 12 people with him, complete with a performance, which sold twice for 1 million euros each. In addition to the auction, British singer/songwriter Charlie XCX, Bocelli and American singer Mary J. Blige entertained guests at the gala, now in its 22nd year. Last year, the event raised a record $35 million, according to amfAR.