Portraits of Princess Dürrüşehvar and many others at Cecil Beaton exhibition 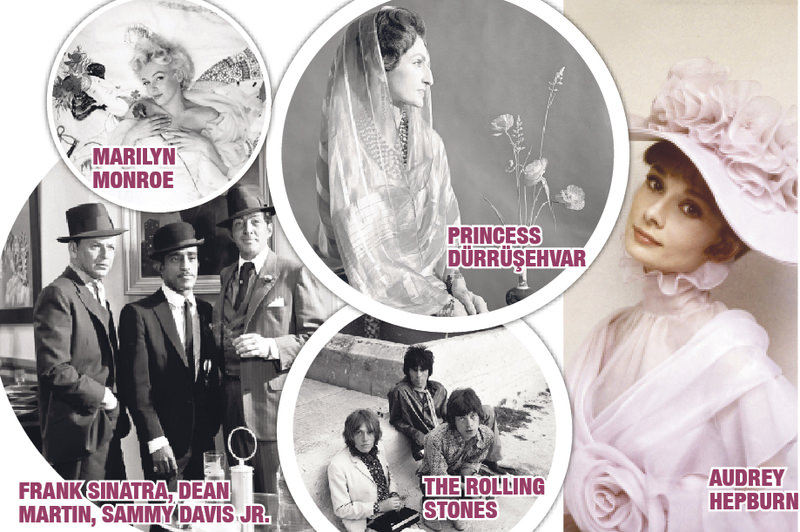 In 1965, British artist Cecil Beaton photographed Princess Dürrüşehvar, daughter of the former caliph of the Ottoman Empire, Sultan Abdülmecid II. On display at Pera Museum's "Cecil Beaton: Portraits" exhibition, the portrait of the princess looks like a classic painting and attests to Beaton's extraordinary gifts as a photographer and artist.

Growing up in Dolmabahçe Palace, Princess Dürrüşehvar's family was forced into exile in 1924 after the royal palace was surrounded by troops. Abdülmecid II, who was reading the Quran or the essays of Montaigne at the time of the siege, according to different sources, was informed that his family had to leave the country. Taking the Orient Express, the caliph and his family settled in Nice. According to Terence Pepper, senior special advisor on photographs at London's National Portrait Gallery and the curator of the "Cecil Beaton: Portraits" exhibition at Pera Museum, one of Princess Dürrüşehvar's photographs by Beaton was taken during the time she spent in France.

"Beaton first photographed her in London when she attended the coronation in London in 1937 of King George and Queen Elizabeth, and then more notably in her palace in India in 1944. The portrait shown here was his third encounter with her and shows her in a composition with occidental props very similar to a fashion session Beaton had taken with Audrey Hepburn at around the same time." Beaton was the most successful British photographer of the 20th century. In his book "Portraits and Observations" American writer Truman Capote offered a famous description of Beaton's work methods and personality: "A person sitting for Beaton has the sense of slightly drifting in space - of not being photographed, but painted, and painted by a casual, barely visible presence."

Beaton was no stranger to Turkey, having traveled here many times. One of those images, taken in Istanbul, shows a mustachioed melon seller posing with a cigarette in hand. Another picture, taken in 1964, shows an Istanbul ferry named "İnkilap" (Revolution) sailing off as its chimney spews a plume of black smoke. "Beaton was a very keen traveler throughout his life, which is reflected in the titles of many books ranging from 'The Face of the World,' to 'Chinese Album and Diary,' 'Far East' and 'Japanese,' " Pepper explains. "Significantly, he traveled to Istanbul and Turkey on three occasions in 1938, 1943, and 1964 taking memorable images in black and white and color." Running until July 26, the "Cecil Beaton: Portraits" exhibition features portraits of artists, actors, writers, intellectuals and royalty from the 1920s to the 1970s from the collection of Sotheby's Cecil Beaton Studio Archive. His portraits of actors, philosophers and royalty continue to be used in magazines and books. A best-selling author, photographic historian, diarist and actor, he is perhaps Britain's best known photographer.

Born in 1904, Beaton came from a very prosperous family. As a child he is known to have climbed up his mother's bed to watch her as she browsed through postcards of famous actresses of the day. Fantasizing about producing similar images himself, Beaton studied art, history and architecture at St John's College Cambridge. There he also worked as a set designer for amateur productions of his university's dramatic society. It was thanks to this latter interest that Beaton would develop a second career as a costume designer for films, winning two Oscars for his work on Hollywood classics "Gigi" and "My Fair Lady." In the exhibition catalogue Pepper describes how Beaton's career took off with the publication of his first credited photograph in British Vogue magazine. "But it would not be until 1927 that he actually received his first contract from Conde Nast to provide illustrations, commentary and photographs for the magazine on a regular basis. Beaton's breakthrough into the world of interesting people that the press and glossy magazines might want to pay to publish began with his first meeting with the rising poet Edith Sitwell in December 1926. He photographed her lying on the floor on black and white checkered linoleum as a medieval sculpture, although it was not until almost a year later that this image appeared as the inside cover of 'The Sketch.' "

Many of Beaton's photography subjects were artists, performers, authors and actors. He photographed American journalist Tom Wolfe in his iconic white suit at the St Regis Hotel in New York. He worked with Barbra Streisand on two separate occasions in New York in 1965 and in Brighton, England in 1969. From the Russian dancer Rudolf Nureyev who defected from the USSR to the English model and singer Twiggy, whom he photographed in his London house at Pelham Place, Beaton excelled at working with creative, artistic people. He made portraits of Jane Birkin, Serge Gainsbourg, Elizabeth Taylor, Audrey Hepburn and Richard Burton. His portrait of Charlotte Rampling on the set of a BBC television play is among the most eye-catching at the Pera exhibition.

In 1974 Beaton suffered a major stroke that left his right arm paralyzed. This forced him to sell his photographic archive to be able to cover the medical costs. During this difficult time Beaton learned how to use his left hand so as to be able to work again. "In the following year he started to accept new photographic commissions and produced a late portfolio of new portraits taken in New York in February 1978 of subjects such as old friends Diana Vreeland and Anita Loos, and new subjects such as the sculptor Louise Nevelson for the Sunday Telegraph Magazine," Pepper says. "Beaton's last major commissions comprised 45 sittings taken between Jan. 29 and Feb. 8 for the May 1979 edition of French Vogue." Beaton died in January 1980 and news of his death devastated the photography world. Princess Dürrüşehvar, 66 years old at the time, must also have been saddened by the news.

"His career stretched from the 1920s until his death in January 1980," Pepper explains. "Since then his work had remained in fashion and provides one of the most astute visual records of the people and society he encountered in London, Paris, New York, and his travels around the world."
Last Update: May 30, 2015 1:24 am