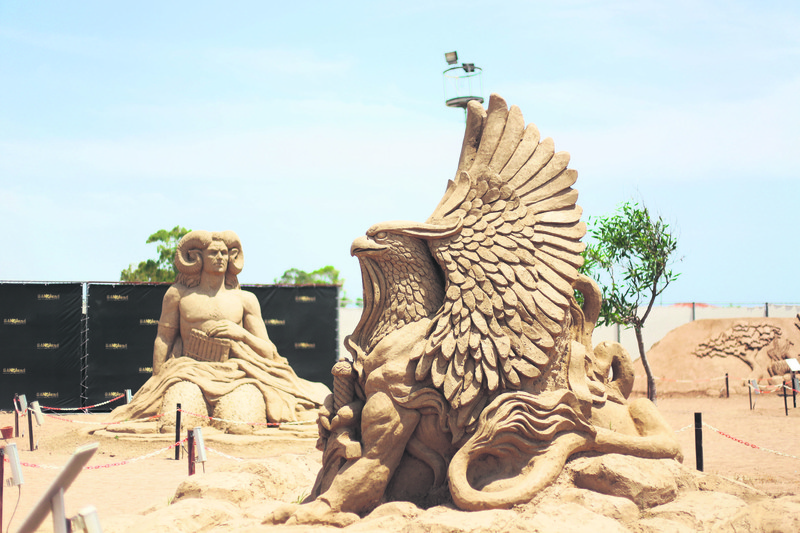 Though not officially open, the Antalya Sand Sculpture Festival is ready for visitors. The festival area features huge sand sculptures of the Hanging Gardens of Babylon, the Mausoleum at Halicarnassus, the Temple of Artemis and many other common elements of culture

The ninth International Antalya Sand Sculpture Festival is now open. With the theme "Seven Wonders of the World and Mythology," the festival features about 30 sand sculptures inspired by mythology. In his statement, festival coordinator Cem Karaca said the festival's opening was delayed for a month due to a change in the location of the exhibition space. The festival welcomes 22 sculptors from nine countries who used more than 10,000 tons of river sand to animate huge sand sculptures into 30 different themes. Besides the animation of mythological stories and characters, sculptures also represent models of the seven wonders of the ancient world such as the Hanging Gardens of Babylon, the Mausoleum at Halicarnassus and the Temple of Artemis. Karaca said the sculptures of the Great Pyramid and Great Sphinx of Giza draw the most attention from visitors.

Karaca said the sculpture of the pyramid is seven meters high and one-twentieth the size of the original pyramid. "For the pyramid, which is the result of 10 days' work by Latvian sculptors Karlis Ile and Maija Puncule, nearly one ton of sand was used. We take visitors on a journey through Egypt with the pyramid and the sphinx, which was built to remain faithful to the original," Karaca said.

Festival deputy director Cenk Yılmaz told an Anadolu Agency (AA) correspondent that local and foreign tourists show great interest in the festival and they are very curious about the huge sculptures. He said the sculptures were made in 32 days over a 15,000-square-meter area. Moreover, he added that the sculptures are between five and 18 meters high. He underscored that the official opening of the festival has not yet occurred: "Visitors cannot hide their shock once they see the huge sculptures. They wonder how they stand so tall and whether they are affected by rain and other weather conditions as they are exhibited out in the open. We are informing our visitors with the help of guides. We are expecting a very high attendance this year."

Visitors are also able to observe the construction phase of the sculptures through a cinevision screening at the festival area. The festival, which will stay open until November, can be visited between 10:00 a.m. and 11:00 p.m. every day at Lara Birlik Public Beach in Antalya. The official opening ceremony will take place on June 13.
Last Update: Jun 05, 2015 1:10 am
RELATED TOPICS