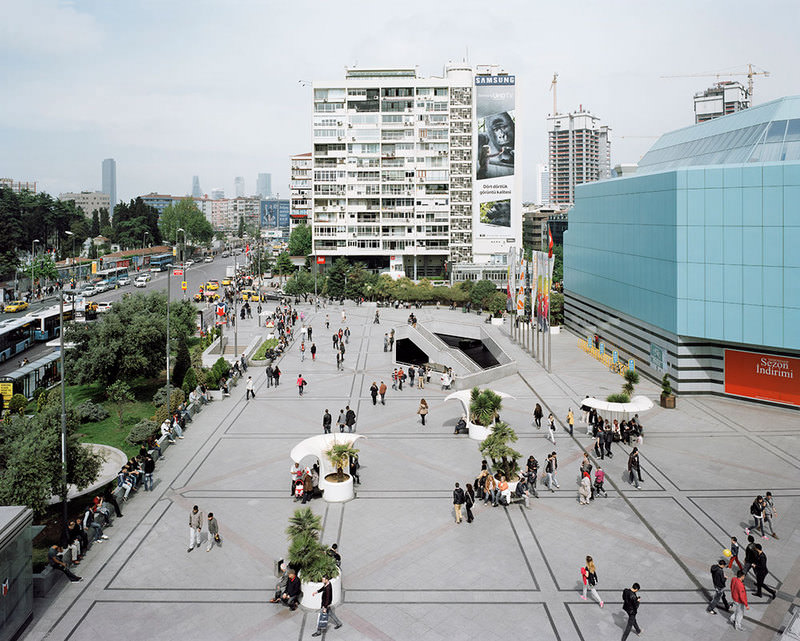 by Kaya Genç Jun 06, 2015 12:00 am
In June 2014, Turkey inaugurated the exhibition, Places of Memory at Arsenale, one of the venues of the Venice Biennale's 14th International Architecture Exhibition. Curated by Murat Tabanlıoğlu, the Places of Memory project featured works by a group of Turkish artists. Serkan Taycan was one of those artists and his works for the Places of Memory project are now in Istanbul. On display at PİLOT Gallery until July 4, Taycan's large format photographs of urban squares makes for interesting viewing. His six large-format photographs offer us a view of Istanbul through its most important urban squares while two backlit photographs portray the inner and outer squares of Istanbul's Cevahir Shopping Mall, a post-modern variation of the urban square theme.

In the exhibition book of the Places of Memory project, Taycan describes his large-format photographs: "The most concentrated area in the city where we can easily observe collective memory is squares. If you look at their historical development process, you can also easily understand how the city has been transformed. But at the same time you know that squares are formed by personal memories. Squares are urban, public spaces where the dwellers of the city gather, share ideas, criticize social happenings ... they are the places where you meet your first dates or are places for protests. The city square is a concentration point of the public memory. ...The squares in these areas [Taksim-Karaköy, Büyükdere and Bab-ı Ali-Sirkeci] all had significant roles considering the public history of Istanbul. ... That is why I came to the point of depicting the memory of the city in photography by choosing a distant location where I can easily see everything together in one particular picture. It is like taking an X-ray of the square."

"Agora is the last piece in a trilogy of photographic series the artist has been working on since 2008," according to the exhibition program.

"Previously focusing on rural areas for his 'Habitat' and on periphery for 'Shell,' Serkan Taycan now looks at the squares as the places embodying personal and collective memory. He observes these places that are microcosms of urban life in order to explore the differences, similarities and the struggle (implicit or not) within the heterogeneous city. In other words, he makes a comparative study of squares."

I asked Taycan about how he started photographing the public squares of Istanbul. He told me about how Agora is part of a bigger project that traces the transformation of our public and personal lives over the last decade.

"I started working on Agora last April," he said. "Over the course of a month, I photographed 12 different squares in Istanbul. I exhibited six of these in the International Architecture Exhibition at the Venice Biennale. For the PİLOT show, I added two new photographs. I care about how public squares are used and interpreted by people. In public spaces, individuals from different classes and backgrounds meet and interact. People can enter those places freely. I wanted to explore those interactions in Istanbul, from its oldest squares to its modern shopping malls."

"The technical aspect was important in creating a visual language," he said. "I took all of these pictures from the top of a crane that provided me

with the necessary height to look at the squares. I needed a place from which I could observe the interactions between people in the squares and the buildings that surround them. My position gave me the chance to observe this without the hierarchies in between them."

Taycan's choice of the word Agora, "gathering place" in Greek, for the exhibition is significant. "I wanted to emphasize the universal identity of Istanbul and how numerous cultures have existed in it in different periods of history. Many of Istanbul's squares and mosques have been built on ancient Roman forums. Beyazıt Square is one example. I find this spatial continuity fascinating."

Taycan is concerned about the transformation of the city. He pointed to the big social divide between Istanbul's center and periphery. "In Western countries this divide has already created big social problems," he said. "If the same thing happens here, Istanbul will lose a crucial part of its historical identity."
Last Update: Jun 10, 2015 9:50 pm
RELATED TOPICS