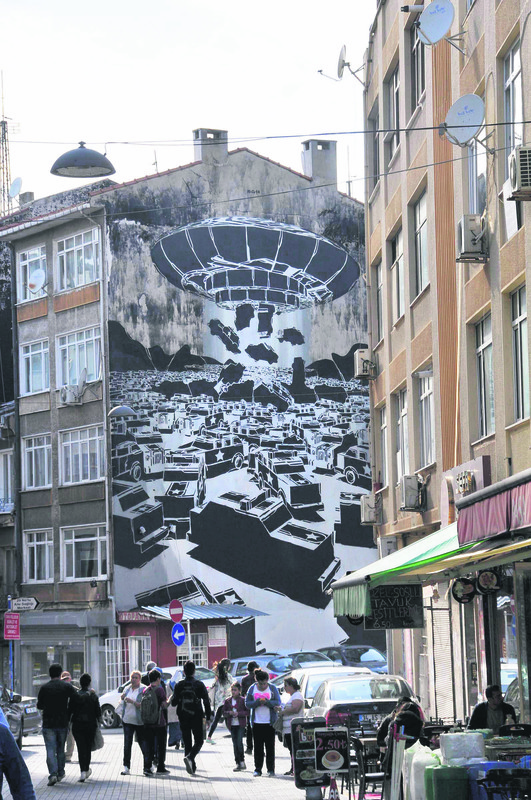 by Anadolu Agency Jun 17, 2015 12:00 am
If you are living in Istanbul, or you have somehow happened to visit this beautiful historical city, you now have the chance of seeing some giant paintings made by muralists from around the world. The aim is to enliven some of the more subdued areas of Istanbul, replacing grey walls with enormous pictures, each telling a different story. The Mural-Ist Festival, organized by the Kadıköy Municipality, will bring together a total of 10 muralists, half of whom made their way from Spain, Russia and the United States, with the aim of bringing some more color to Istanbul.

The first such festival was held in 2012, two years before a mural in the Kadıköy district painted by Polish artist M-City, ranked among "the best 20 of 2014."

This year the artists include Levi Ponce and Kristy Sandoval from the U.S., DEIH and ARYZ from Spain and CANAVAR and CINS from Turkey. They will all work in Kadıköy on the Anatolian side of the city, with the last one painting the Kadıköy Municipality building in September. On one of the walls, people will see a mural titled "Miracle," which will depict a pregnant woman sitting in a garden full of beautiful flowers, looking forward to taking her baby onto her lap.

"This is so special, because the woman in the picture is my wife," said the artist, Rustam QBic, from Kazan, the capital of Tatarstan in Russia.

"Anybody who sees 'Miracle' can understand what it is like to wait for a baby." A crane lifts the 30-year-old artist up and he starts drawing the first draft on the wall, which will be, when completed, another one of his surreal paintings. It will take the artist around 10 days to complete the mural. "I am really excited because this is the first time I have been abroad for mural painting," he told Anadolu Agency. Having painted murals in his country for the last three years, Rustam has painted at least 10 walls across Russia. Two years ago, when he saw a notice inviting foreign artists to come and paint walls in Istanbul as part of the Mural-Ist Festival, he applied. Before long, he got a call from Istanbul accepting his application.

The organizers did not ask to preview the pictures that the artists will paint on the walls. "It will be a surprise for all of us," one said.

Rustam's paintings are different as the people in the pictures do not have heads.

"In my first paintings I was drawing people's faces as well, but later when I learned that depicting people was not really good in Islam, I stopped and I began replacing the people's heads with what is in their minds," he said.

"Surprisingly, those paintings drew more attention from people, and I went on to draw people's feelings, interests and demands instead of their heads." Many people want to have their photos taken with the giant paintings, he said, laughing: " 'Wow' is the reaction that I hear most when people see the completed walls." The Mural-Ist Street Art Festival will run until September.
RELATED TOPICS