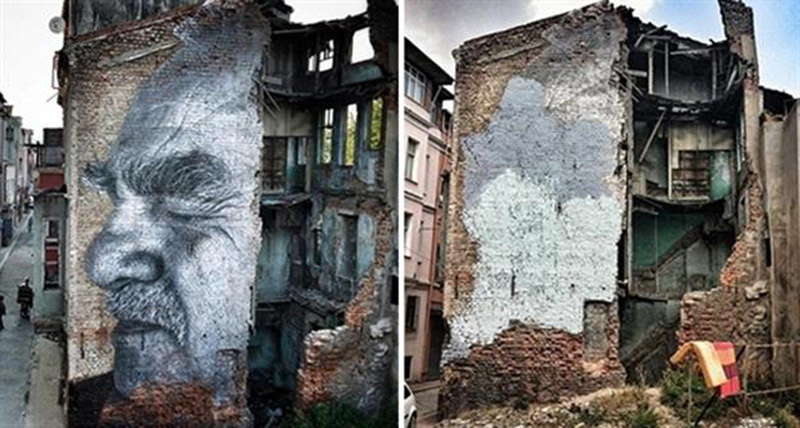 by Daily Sabah Jun 18, 2015 12:00 am
World-renowned photographer and street artist JR's graffiti portraying an old man on a run-down building in Istanbul's Fatih district has been ruined after an unidentified person painted over it.

JR has been exhibiting his "Wrinkles of the City" project in Istanbul since May. Within the scope of his art project, JR exhibited huge portraits of old people on worn out buildings. He had three huge portraits exhibited in Balat, an old neighborhood of Istanbul, however, someone painted over one of his portraits in Balat, sparking outrage on social media.

"TED Prize" award-winning artist JR shared a "before-after" photo of his work on his official Twitter account on Wednesday. Even though it has been claimed that the police of Fatih Municipality have ruined the work, the Municipality has denied the claims saying that the incident has saddened them as well and it does not make sense to ruin something they have worked cooperatively with.

"That is out of the question that Fatih Municipality has interfered with such a wonderful project," said the Municipality on its official Twitter account.

JR put the "Wrinkles of the City" project into practice in May in Istanbul, which he performed in Los Angeles, Cartagena, Shanghai, Le Havana and Berlin so far.
Last Update: Jun 18, 2015 4:59 pm
RELATED TOPICS