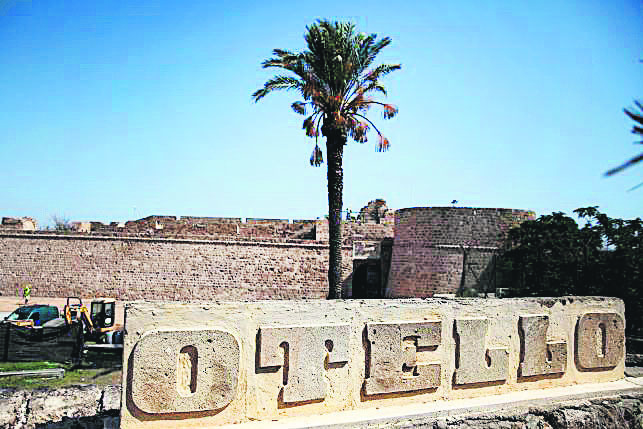 by Jun 18, 2015 12:00 am
The 14th-century Cypriot tower that is the fictional setting of Shakespeare's play "Othello" reopens next month after undergoing renovation following decades of decay on the internationally isolated Turkish side of the ethnically divided island.

The "Othello Tower" was long a tourist magnet. But after Cyprus was partitioned by a 1974 Turkish invasion triggered by a brief Greek-inspired coup, hundreds of the island's heritage sites fell foul of what became a frozen conflict.

Part of a fortress in the mediaeval city of Famagusta just within the Turkish side of Cyprus's "Green Line" on the eastern coast, the tower has been undergoing emergency stabilisation for the past year to protect it from extensive water damage. According to the Bard, it was in the tower that the dark-skinned Moor Othello, egged on by his supposed trusty adviser Iago, goes into a jealous rage over the alleged infidelity of his new bride Desdemona and smothers her. In true Shakespearean fashion, Othello takes his own life after realising his mistake.

Barricaded to visitors for the past 11 months, the tower will reopen in July -- fittingly with a performance of the Shakespearean drama by young Turkish and Greek Cypriot actors. "This is part of our common heritage," said Glafcos Constantinides, a member of a joint team of Greek and Turkish Cypriot cultural experts tasked with salvaging monuments on the Mediterranean island, showing it off during a press preview.

"Our heritage comes from the past, but also what we expect to build in the future." The restoration project is one of several earmarked by a group of Greek and Turkish Cypriots who, acting with the approval of their respective political leaderships as inter-communal tensions along the Green Line have eased in recent years, are working to conserve Cyprus's cultural heritage.

"Our biggest challenge was the rainwater. The complex absorbs it like a sponge," said Fatma Terlik, contract manager for the project carried out under the supervision of the United Nations Development Programme with European Commission funds.

A drainage system was installed, together with work to restore some of the walls of the building, she told Reuters. Famagusta lies just within internationally unrecognised northern Cyprus, a breakaway Turkish Cypriot state reliant on economic aid from Ankara and an area traditionally shunned by international conservation projects for political reasons. The imposing fortress was built by Lusignan conquerors in the 14th century. It was remodelled and expanded in the 15th century by the Venetians, whose winged Lion of St. Mark emblem is still clearly visible, carved over its portal.