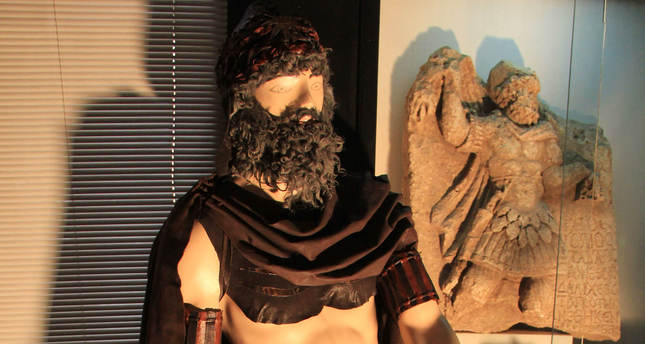 The leather dress, which was inspired by the attire of the warriors featured in the Jupiter Dolichenus relievo unearthed during excavations in the ancient city of Perre, is being exhibited in the Adıyaman Museum. Designer Filiz Can organized a ceremony at the museum to present the warrior's dress that will be featured at her fashion show on Mt. Nemrut within the next year.

In his speech at the ceremony, Adıyaman Museum Director Fehmi Eraslan said Can was inspired by the Jupiter Dolichenus relievo that was discovered in Perre in 2011 for the dress. Eraslan added that the dress, which is exhibited near the relievo, is very important for the fashion show that will be held in 2016. He stressed that the presentation also helped people visualize how the fashion show on Mt. Nemrut will look like.

Designed by Filiz Can, the dress will be displayed on the podium at the fashion show that has been organized to display the fashion during the time of the Kingdom of Commagene. Can said she used leather materials to replicate the Jupiter Dolichenus dress and added that the design will only be used at presentations. Can concluded by saying that she will soon begin the preparations for the fashion show.

Share on Facebook Share on Twitter
Previous in Arts Artnext is displaying the "Summer Collective" exhibition containing... Next in Arts Life on earth is getting dangerous because of the increasing drought...
DAILY SABAH RECOMMENDS