First aid to cultural heritage in times of crisis 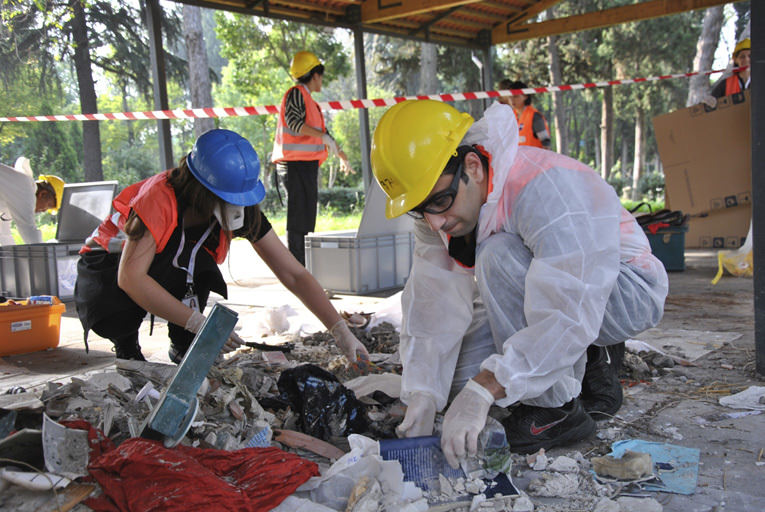 Due to wars and natural disasters, precious elements of humanitarian and artistic heritage have been dramatically damaged.As a result, a new professional term has emerged: ‘First aid to cultural heritage' aimed at protecting and preserving cultural heritage in times of crisis

With the increasing number of wars and clashes as well as continued natural disasters, a new line of business has emerged. The International Center for the Study of the Preservation and Restoration of Cultural Property (ICCROM), which is affiliated with the United Nations Educational, Scientific and Cultural Organization's (UNESCO), has offered a program titled "First Aid to Cultural Heritage in Times of Crisis" since 2010. People who participate in the program are ready to take movable cultural assets under protection and provide consultation for the search and rescue teams operating in the area in case of earthquake, war or an outbreak of violence. Program participants, who worked during the aftermath of the earthquakes in Haiti and Nepal, also offered distant training to those working in war zones in Syria and Iraq.

Every year 21 people participate in a five-week training workshop for the program. Those who finish their training successfully become the cultural first-aiders of their countries. Associate Professor Hülya Yüceer of Department of Architecture at Adana Science and Technology University was the first person to be trained at the Cultural Heritage First Aid in the Times of Crisis program. She said that they "will collaborate with the relevant institutions and organizations to train many cultural first-aiders in Turkey," and added that she provides courses for Turkish people to provide human resources to ICCROM in order to help them protect the tangible cultural heritages in case of a natural disaster or emergency.

"Cultural first-aiders train new first-aiders in their country and then go to other countries to protect cultural heritage in emergency situations. Some of them have worked during the Haiti and Nepal earthquakes. Museum officers in Syria and Iraq also took remote training," Yüceer continued. When movable and immovable cultural heritage sites are damaged, cultural first-aiders first take life safety measurements and then go to the field to help avoid further damage. Following and documenting the necessary procedures are is done to protect damaged cultural heritage. "Cultural heritage is either historical monuments or work displayed at museums. Preliminary measurements are taken to avoid damage. An example for cultural first aid is placing supportive material to prevent the destruction of a historical building with cracks after an earthquake," he said. On the other side, movable cultural heritage is first sorted out and stored in a safe place. Later, expert renovators who specialize in the related fields carry out long-term restoration on damaged work.

"Turkey and its surrounding area are rich in cultural heritage, yet there are serious conflicts around us and we have witnessed how cultural heritage was destroyed during them. Besides this, Turkey is prone to natural disasters, notably earthquakes, which cause significant loss of life and property. In such situations, it is possible to damage cultural heritage when attempting to protect them," he added. Yüceer said it is important to form equipped cultural first-aiders who can immediately access the damaged area and take the necessary steps. Officers from ICCROM said to Yüceer that a workshop will be organized on cultural first-aiding in Turkey. A joint program will be designed to train Turkey's cultural first-aiders with the support of the related institutions.
Last Update: Jul 02, 2015 8:22 pm
RELATED TOPICS