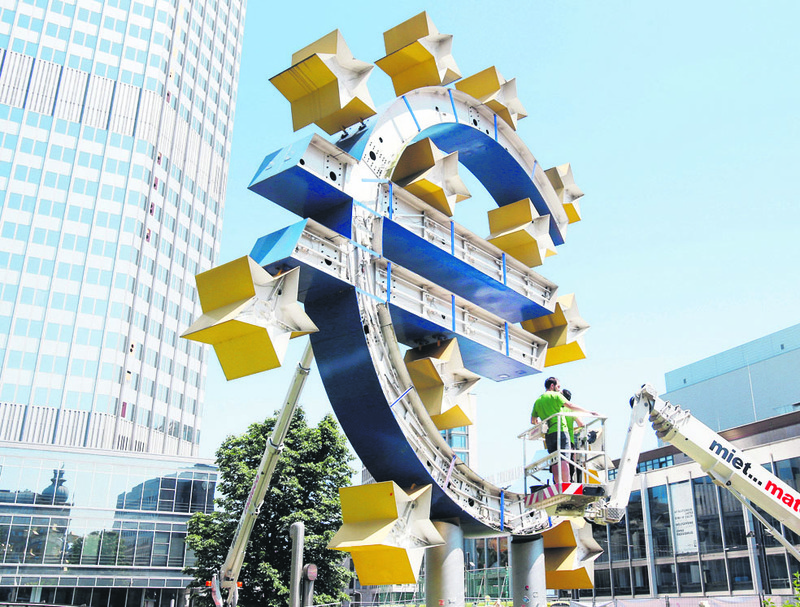 by Jul 09, 2015 12:00 am
The euro may be facing an existential crisis but the giant 14-metre sculpture of the euro symbol that towers over downtown Frankfurt, home of the European Central Bank, was still getting its biggest makeover in 13 years on Monday. Considered an eyesore by many Frankfurters, the run down blue and gold structure situated in front of the ECB's former headquarters was dismantled by construction workers, who plan to fix it up from years of wear and tear, including attacks by protesters. Owned by the non-profit Frankfurter Kultur Komitee, the common currency's best known symbol will get fashionable LED lighting and new panels at a cost of up to 60,000 euros, financed by donations, including from the ECB, the Bundesbank and private individuals. The work, which is expected to conclude this week, starts as the currency faced its biggest test with policymakers openly discussing Greece's exit from the bloc after it rejected bailout terms in a hastily called referendum on Friday. Designed by artist Ottmar Hörl, the euro sculpture has been among the most photographed landmarks in Frankfurt and the work caps years of bickering over the renovation.

"Despite all of the issues, I still consider the currency union and the efforts for a combined and solidly united Europe to be one of the greatest achievements of the 21st century."