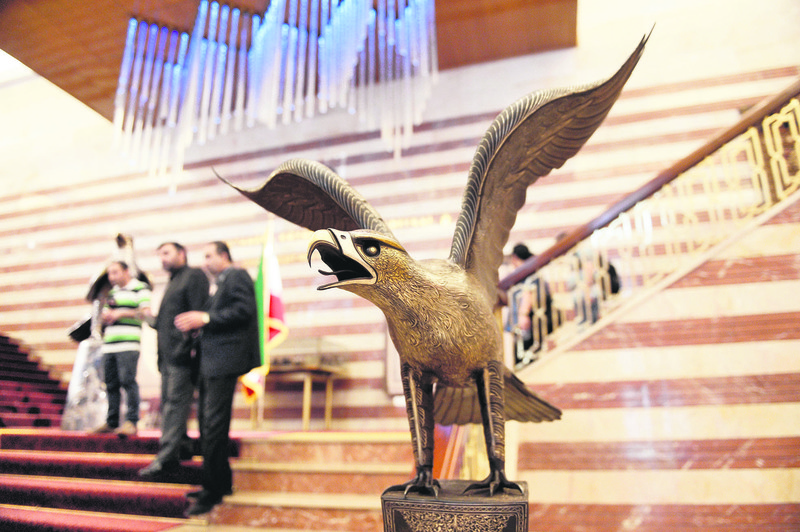 Some of the world's most prestigious Iranian artwork, from calligraphy to hand-woven silk carpets, are currently on display at the Cemal Reşit Rey Concert Hall until the end of this week

Remaining on view until July 12, the exhibition "Feşdan Arşa" (From Earth to the Sky) brings the work of prominent names from the Iranian art scene to the Cemal Reşit Rey (CRR) Concert Hall Lounge Area. Started on July 3, the exhibition showcases precious hand-woven silk carpets, metal engravings, paintings on plaster as well as calligraphies, miniatures, sculptures with iron, gold and copper engravings and Persian turquoises. Some of the most interesting pieces of the exhibition are certain calligraphic works that were made without frame on fabric. Visitors can see 32 examples of this kind at the exhibition. Calligraphy requires great effort and is made with special paints and pencils, the pieces are highly expensive and cost around $40,000. Made of silver and gold, an eagle sculpture, which is 2.2 meters wide, is on sale for $35,000. Almost 230 works of art were brought from Iran for the exhibition. One of the most expensive pieces in the exhibition is a 40-square-meter silk carpet, which costs $110,000. Organized by Afshar Stone Fine Arts run by Mohammad Nazmi Afshar of the family of the Iranian emperor Fath Ali Shah, the exhibition is contributed by Sayed Rafi Razavi, president of the Rafi Contemporary Art Group. It is also supported by Iran's Consul-General, Muhsin Murtazaifer, and Culture Attaché Abdur Rıza Rashid. 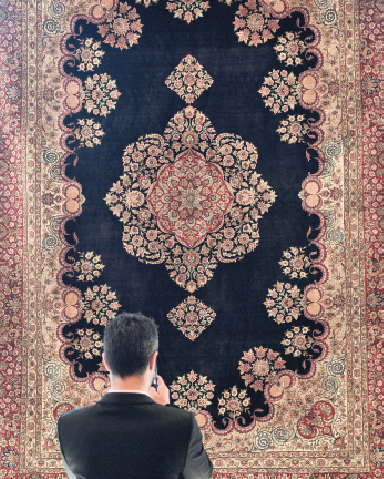 The exhibition commenced with an opening speech by Murtaizaifer praising the deep historical relations between Turkey and Iran. "Our language and religion are common. Over the years, political and economic bonds between the two countries have developed. I believe the event will contribute to cultural relations between Iran and Turkey," he said, adding that Iranian and Turkish cultures are familiar to each other. "We know that Turkish was spoken in Iran and Persian was spoken among Seljuk Turks. The exhibition highlights our common culture," Murtaizaifer added. 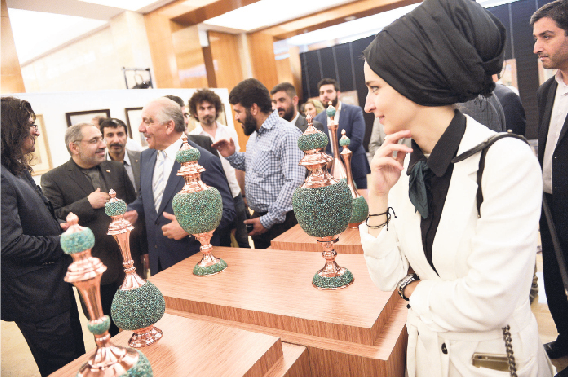 Remzi Gür, the exhibition sponsor, said, "Art is the common property of the world. Islamic artworks are displayed in India, Turkey, Pakistan, Iran and the Arab peninsula as well as in other countries around the world. I believe the timing of the exhibition also increases interest toward the event, as we mark Ramadan these days." In the Islamic world, calligraphy is also seen as a deep-rooted art. "We share a common history with Iran, yet Iranian artists are different from Turkish artists with their style. This is why both sides can benefit from each other with this exhibition," Gür continued, adding that they are planning to open more comprehensive exhibitions in the future. 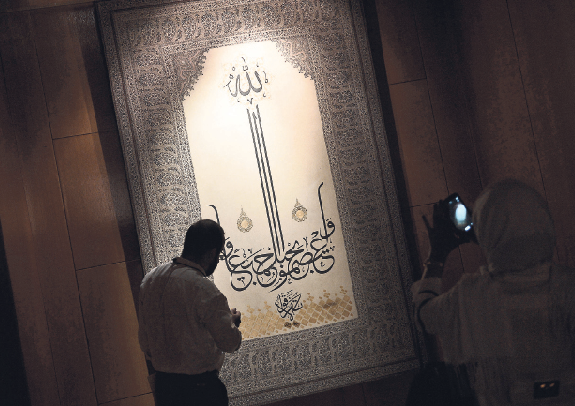 Gür said one of the distinct differences between Iranian and Turkish calligraphy is that while Turkish artists use paper, Iranian artists write on cloth. "They also blend gold and copper into their sculptures. That might also be interesting," he said. Mohammad Nazmi Afshar, the exhibition curator said the exhibition is probably the biggest Iranian art event in Turkey. "We have been thinking of introducing Iranian art to Turkey for the last three years," he said. Most of the displayed art work was designed by Esfahan-based artists. "Esfahan is the culture capital of Iran with a history of 2,500 years. We wanted to bring our art to a Turkish audience. I see Esfahan and Istanbul as brother cities," Afshar added, saying that the city of Esfahan harbors many historical works. "I want to call on us all to safeguard our common culture," he said.
Last Update: Jul 09, 2015 9:52 pm
RELATED TOPICS