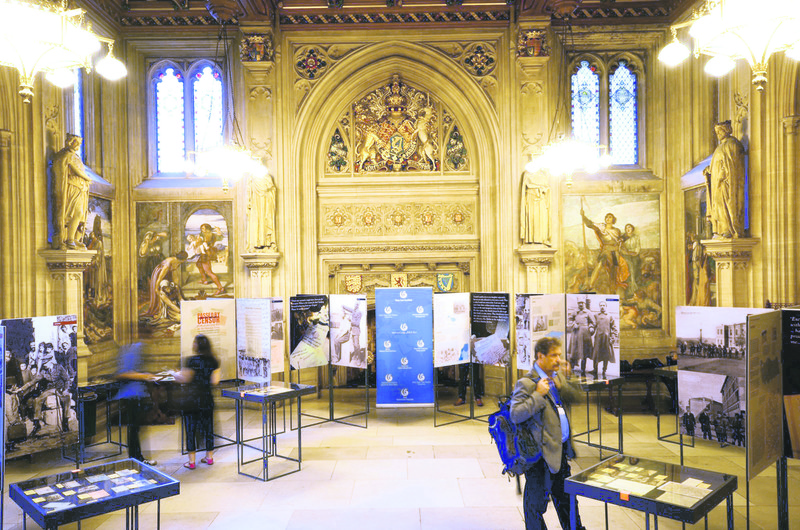 by Anadolu Agency Jul 14, 2015 12:00 am
The British parliament recently opened an exhibition showcasing photos and documents belonging to captives imprisoned on the Ottoman front during World War I. Organized by the London branch of Yunus Emre Institute, the exhibition's opening ceremony was overseen by John Whittingdale, the secretary of state for culture, media and sport, and British deputies David Burrowes and Zac Goldsmith, Turkey's London Ambassador Abdurrahman Bilgiç and Consul-General Emirhan Yorulmaz, along with other guests. In a statement to Anadolu Agency, Ebubekir Ceylan, the deputy president of the Yunus Emre Institute, said, "When you look at these documents, you see the humanitarian side of the war. British prisoners were playing hockey or racing in gunny sacks with Turks. With this exhibition, we wanted to create a bridge between the two countries and find a common point with British society." Ceylan said that the institute is planning to introduce the exhibition to the National Archives and the Imperial War Museum as well as other countries.

Featuring documents from collector and philatelist Kemal Giray, the exhibition consists of letters, postcards and photographs. Giray said there are two highly important pieces in the exhibition. "The first one is a letter written by [civil servant] Abdülhalik Renda to the captain, who was carrying him to Malta as a prisoner. Renda wrote the letter to the captain following his release. In the letter, Renda thanked the captain for his kind attitude and ended the letter with the words "Sizin eski esiriniz, İzmir Valisi" [Governor of İzmir, your former prisoner]." The second piece is a map written on thin paper and kept in a banana peel. "The map shows how British prisoners captured in Yozgat could go to the Iskenderun Gulf. Twenty seven prisoners escaped from Yozgat and went to Egypt." Fahri Aral, the exhibition curator, said that the exhibition shows the effort war prisoners put in to continue their lives. "In the middle of a horrifying war, they tried to survive. A British prisoner said, 'We are playing hockey here, but we do not have a ball.' They also formed music groups and football teams," Aral concluded. The exhibition will remain open until July 17 at the British parliament. Visitors can see it at the Yunus Emre Institute from July 21 to 31.
Last Update: Jul 14, 2015 7:48 pm
RELATED TOPICS