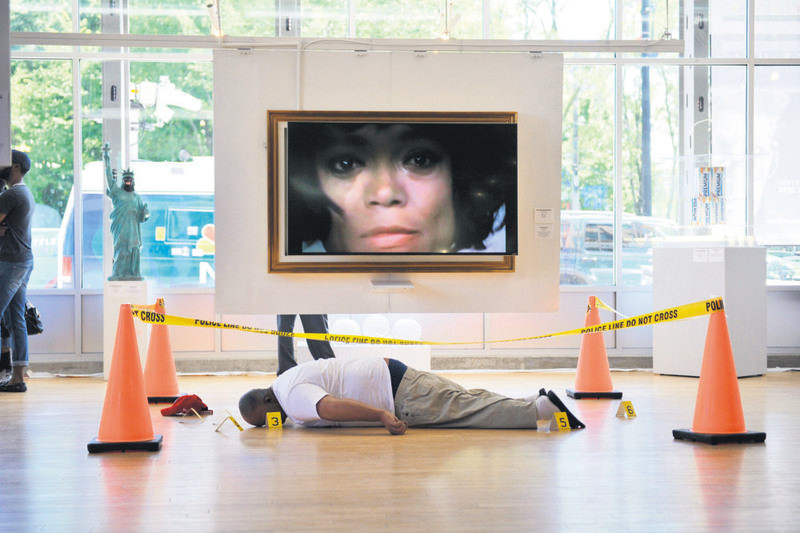 by Jul 19, 2015 12:00 am
It was an image that shocked and angered many: a dead, black 18- year-old left face-down for hours in the middle of a street after being shot multiple times by a white police officer, his red Cardinals baseball cap knocked from his head by the fall.

Now a Chicago art exhibit has stirred controversy with a life-size silicone replica of Michael Brown after he was fatally shot on a street in Ferguson, Missouri, last year.

The mannequin, dressed in white T-shirt and khaki pants, lies on the hardwood floor of Gallery Guichard, in the city's Bronzeville neighborhood.

Gallery curator and co-owner Andre Guichard, 48, said he has received death threats and racist phone calls about the Brown replica. 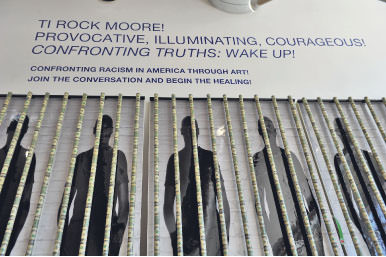 The installation is one of 50 works included in "Confronting Truths: Wake Up!," an exhibit by Ti-Rock Moore, a white woman from New Orleans, that has attracted a trickle of visitors since it opened on Friday. "The installation ... is the result of my desire to mark the tragedy as one of historical significance, commemorate this young man, and call attention to the racial injustices that remain so devastatingly relevant today," Moore said in an email, acknowledging that the likeness of the dead body was sensitive.

Other installations in the exhibit feature nooses, Saltine cracker boxes and a model Statue of Liberty with black face. Moore says her art explores white privilege. "I feel that it is necessary for white people to take accountability for their role in the fight against racism, and advocacy on our behalf is absolutely necessary in getting anywhere. After all, we are the perpetrators. My race is pivotal to the conversation that revolves around my work," she said.

The exhibit runs through Aug. 10, one day past the anniversary of the day Brown was fatally shot by Darren Wilson, a white police officer with the Ferguson Police Department.

The circumstances surrounding the shooting were disputed, leading to riots in suburban St. Louis and protests around the world. A grand jury decided not to indict Wilson, prompting further protests, and the U.S. Department of Justice cleared Wilson of any civil rights violations.

Mary Watkins, 36, said she took the bus from Milwaukee to see the exhibit on Tuesday. "I wanted to come see it right now because it's so controversial," said Watkins, a certified nursing assistant and activist against police brutality. "I really hope people look at the exhibit as a whole instead of making a snap judgment ... without viewing the whole exhibit, you are not getting the full effect."

Brown's father, Michael Brown Sr., told a Fox news affiliate he wanted the exhibit taken down. "I think it's disturbing, disgusting ... that picture is still in my head."

Guichard said a letter was sent to the Brown family, but only the teen's mother Lesley McSpadden received it. McSpadden attended the opening last week, but Brown did not, he said. Guichard said he has reached out to the father, apologizing for the misunderstanding, but has not received a response.