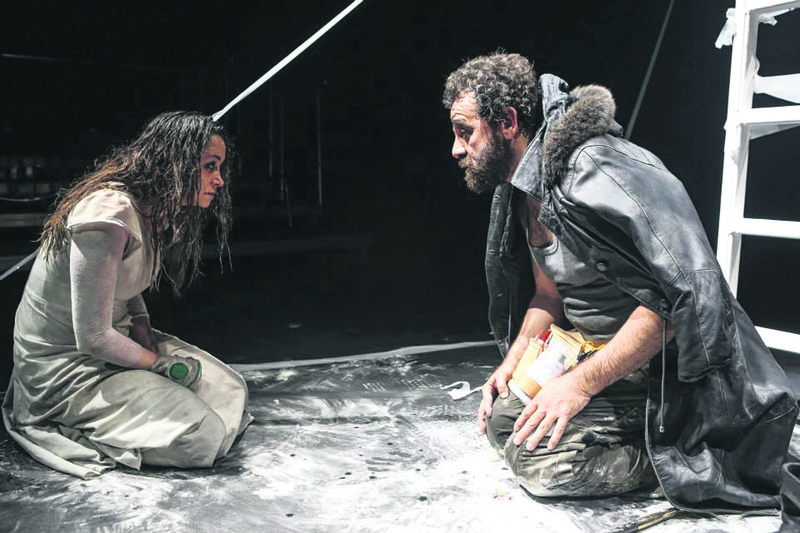 by Asena E. Arıoğlu Jul 20, 2015 12:00 am
Turkish theater group Theater Hayal Perdesi (Curtain of Dreams Beyoğlu) is getting ready to perform in the world famous Edinburgh Festival Fringe, as the first Turkish theater group to ever be there. Theater Hayal Perdesi produced its first play on May 11, 2014. "The Empire Builders" is its first production, and was submitted to 19th Istanbul Theatre Festival and has been accepted. The group's first production is the last play of Boris Vian, written in 1957, called "The Empire Builders."

Now, with their first production, the group is attending one of the most important performing arts' festivals, Edinburgh Festival Fringe. Moreover, Hayal Perdesi will be the first Turkish theater group to attend this 69-year-old festival. It is one of the biggest performing arts festivals in the world. Theater groups, from all around the world, come together and meet at this festival. "On January, I started writing to them about the application process. After three months, we were accepted and received our invitation letters. And now, we are going to Edinburgh. We have been receiving congratulation calls from Turkish citizens living there. Also, the Turkish consulate there, especially Mr. Semih Turgut, has been very helpful and supportive during the process. We have received much more support than we were expecting. This production is going to Edinburgh sponsored by Turkish Airlines, Western Union, TRYAD and istanbuldasanat.org. Moreover, this project has the support of Republic of Turkey Prime Ministry Promotion Fund," said Selin İşcan, the founder actress of the Hayal Perdesi.

The Empire Builders has been produced many times in different countries by different directors. The "Schumurz" character has always been interpreted in different ways. Usually, "Schumurz" seems to be portrayed as a scary, miserable and male character. However, in the Turkish version, "Schumurz" is a woman in white and she is pitiful rather than scary. Schumurz symbolises the oppressed for İşcan. "What/who do we ignore, maltreat, and beat up? The answer to these questions is "the Schumurz." For me, it is the oppressed, and for others it is something else... I think this is what makes theater so beautiful. While preparing for this character, I also thought about who I oppress, and by whom I am oppressed. I guess, now, women would be the Schumurz of Turkey. Every day we hear about a different domestic violence story which victimises women. Therefore, this makes the women the Schumurz; maltreated, ignored, but still existing... I interpret the situation of the oppressed, in the light of the text as, the oppressed, even if they are wounded and pitiful, their existence continues to be a threat to the oppressors," the actress said.

Reha Özcan is playing the leading role, Leon Dupont. Ayşe Lebriz Berken is one of the actresses of İstanbul Public Theatres. I and Nihat Alptekin are from the İstanbul City Theatres. Finally, Selin Tekman and Tuba Karabey are among the young, talented actresses of Turkey. The group have been to Skopje Theater Festival, and after Edinburgh, they will be going to Cyprus, İzmir, Moscow, Berlin, and probably to London. Aleksandar Popovski, with this production, has won an award for best director in the 19th Afife Jale Theater Awards. The character "Schumurz" won the best co-actress prize for Yeni Tiyatro Magazine Awards. Moreover, the play and its cast have received many more nominations.

Those who are interested in further information about the play can follow the group on @hayalperdesib on Twitter and Hayal Perdesi Beyoğlu on Facebook or on the web page www.hayalperdesibeyoglu.com. Furthermore, tickets are available at https://tickets.edfringe.com/whats-on/empire-builders.
Last Update: Jul 22, 2015 2:29 am
RELATED TOPICS