Installation explores the future of the Bosporus 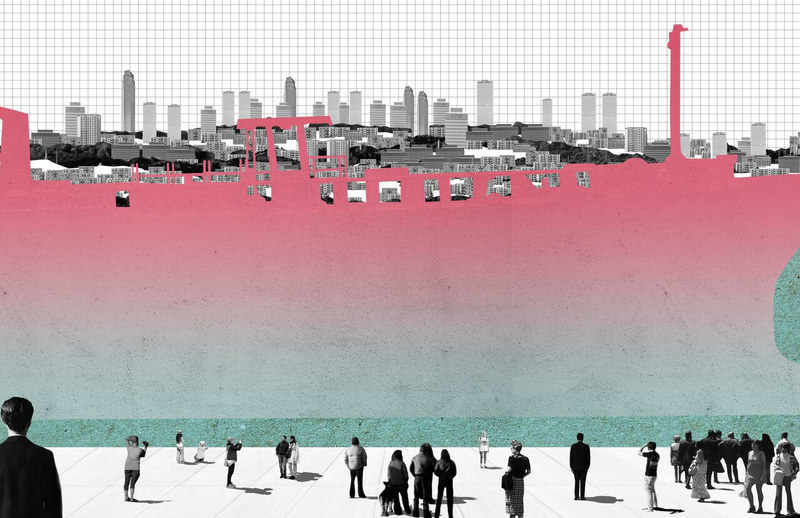 Researched and designed by Neyran Turan, SALT Beyoğlu's ‘Strait' installation consists of two parts: A scaled extrusion of the Bosporus shorelines and a silent film that tells the story of a colossal oil tanker becoming stuck in the Bosporus Strait, showcasing the installation object as its lead character

One day in March 2025, the world's largest oil tanker arrives in Istanbul. Named Oilella, the tanker catches the attention of Istanbul residents who are surprised to see such a colossal object moving through the Bosporus. To their horror, Oilella fails to move beyond the Strait's narrowest point and is stuck, leading people to wonder whether it will spill its oil into the Bosporus or explode before their eyes. Contrary to expectations, nothing happens to Oilella and the ship continues to inspire the imagination of Istanbul citizens with its sublime existence. Blocking the Bosporus to other ships, Oilella transforms the Strait into a land of opportunities that "The Council of New Lands" plans to repurpose by constructing a landfill in its place. Entrepreneurs build marinas and luxury hotels on the shoreline so that visitors can enjoy the view of the Strait's last days in perfect conditions; meanwhile famous architects are commissioned to create new buildings and monuments on the landfill.

One of those fictional monuments is named the Strait Object, built to "commemorate the original shorelines that dissolved after the infill," and it is on display at SALT Beyoglu's entrance until August 2.

Turan described to me her main ambition in the Strait project as rendering "the geographic scale as an experiential condition." By doing this, she says, the installation aims to open up a range of aesthetic and political concerns for architectural imagination and the broader public.

"The installation object manifests the constrained and narrow Bosporus Strait as a human-scaled passageway, and the visitor's pathway through the installation evokes the narrowness of the Bosporus," she said.

The intellectual background of the work is related to Turan's larger interest in the productive relationships between geography and design. "I am an architect, and as a practitioner and scholar of architecture, I am interested in opening up new aesthetic and political lines of inquiry within architecture and urbanism through a geographic focus," Turan explained.

For Turan's team, the narrow and elongated space of the gallery was an interesting challenge to situate the installation object. "While the installation object invades the entrance floor of the gallery as an 'out-of-scale' monolith, it is scaled in such a way that the tightest point in the Strait measures 90 centimeters, the minimum dimension for a door opening in architecture," she said.

"In this way, the object renders the Bosporus a constricted experiential condition. Since the topography is not articulated in the object, the constricted and narrow experience through the object becomes even more exaggerated. As an abstraction of geographic information, the object renders the Bosporus simultaneously more tangible and more abstract. Also, we wanted to position the curves and twists of the shores in such a way in the plan so that they have multiple interactions with the columns in the gallery space of SALT Beyoğlu,"he said. Sometimes the columns are "eaten up" by the object and disappear within the object, Turan explained, while at other times they are revealed and emphasized further with the white background of the object.

"Since the object changes its profile from the entrance to the back, it creates interesting effects where the passages on the sides slowly expand as one walks from the entrance into the backside of the gallery framing your entrance to the space. And when exiting SALT to the Istiklal Avenue, it frames your view of the street and the crowd in a compressing manner as the passage narrows."

The Strait project can be seen as an extension of Turan's doctoral research, conducted at Harvard University's Graduate School of Design, where she was looking at the interactions with the geo-political and urban histories of the Bosporus since the Montreux Convention in the 1930s. She is also the founding editor-in-chief of the New Geographies journal, published by Harvard University Graduate School of Design, which aims to dwell on the interactions between geography and design. Both the framework of her doctoral research and the journal had an impact on the premise of the Strait project.

"In an attempt to amplify the contestation between architectural and geographic scales, the installation reconstructs the crenelated shorelines of the Bosporus with locally used crown molding (kartonpiyer) section profiles, commonly used as interior ceiling ornamentation in Istanbul," Turan said. "In order to realize that, we altered and redrew the shorelines by using already existing crown molding profiles. Here, re-drawing of the shores like this was similar to knitting and necessitated a lot of patience."

The Strait object is made up of three sets of 25 different large-scale foam blocks (75 pieces in total), each of which was hot-wired cut in with an industrial foam cutter, which are then held up by a wooden structural construction system. "After the form of the object was finalized, which took months of revisions, we produced the construction drawings of each foam piece as well as the wood structural system that holds it," Turan explained.

"The cutting of the pieces started at an industrial warehouse a month before the installation. The foam pieces were transported to SALT Beyoğlu with trucks and after that we installed the exhibition in one week. In terms of its design and production, the object looks very minimalist and abstract from the outside (white and one piece) yet, because of the geometric changes and complexities in its form, establishing precise details for material connections between foam and wood pieces etc. were definitely challenging in the preparation of construction drawings as well as in the installation process but we all enjoyed it!"

For Turan and her team, the most influential thing for the Strait project has been the "unattractive" oil tanker passing through the fragile picturesque landscape. "After the collapse of the Soviet Union and the opening of the Caspian oil reserves in the 1990s, the Bosporus Strait became one of the six busiest oil-shipping 'choke points' in the world. Compared to the other trade routes, however, the Bosporus Strait is unique as one of the narrowest and most urbanized, as it passes through the heart of Istanbul, a city of 14 million citizens. To complicate matters even further, the geographic form of the Strait, with its sharp and narrow turns, makes it one of the most risky and difficult channels to navigate in the world. As the number of international ships passing through the city has increased threefold since the 1990s, their unsettling scale is almost flattened, and as mentioned earlier, has become a ubiquitous part of the Bosporus picturesque. Only the occasional errors, accidents in the form of a collision, grounding, or fire, have shattered this complacency. These accidents remain the only moments when the visual screen is lifted to reveal the zone of insecurity at the heart of this dense and rapidly growing city."

I then asked her about the "geographic fiction," or the silent film, where the contestation between architectural and geographic scales is presented through the sheer presence of the oil tanker. "Oil tankers that are currently passing through the Bosporus

are already too big, out-of-scale and hazardous for the city and their navigational route is pretty difficult and dangerous for a potential accident," she said. "Yet, the tankers are paradoxically very much part of the Bosporus picturesque. I wanted to express this condition in a slightly abstracted way. The story dwells on this condition and alters reality slightly to push the limits of imagination. In the end, both the installation object as well as the fiction and its visual representations are slightly unfamiliar."

The tone of the drawings and the narrative Turan used in the silent film aims to suspend reality and fiction with a "slightly unfamiliar" tone. "They neither depict a realist proposal nor a utopian future for Istanbul but create a background for the installation object after it is experienced upon entrance," she said. "Silent film format was chosen for its potential to present a narrative that emphasizes the visual presence of the drawings and their connections to the text, without the identity of a particular 'narrator' voice."

The project was made possible by a project team led by Turan. "First and foremost, the help of Mete Sönmez, my partner at NEMESTUDIO, was paramount. Other members of the project team are all students from the Rice University's School of Architecture, where I teach: William Trotty, Melis Uğurlu and Anastasia Yee were with me till the end, and Amelia Hazinski, Louise Weiss, and Sam Biroscak were involved in the project in its early phases," she said.

At SALT, Meric Oner and Vasif Kortun created an enthusiastic and productive setting for Turan. "Their critical comments and feedback were paramount for the development and realization of the project. And finally, the production team of SALT lead by Sani Karamustafa helped us make the final production a reality and an amazing experience. The project would not be possible without the belief and support of the names mentioned above," Turan added.
Last Update: Jul 24, 2015 11:44 pm
RELATED TOPICS