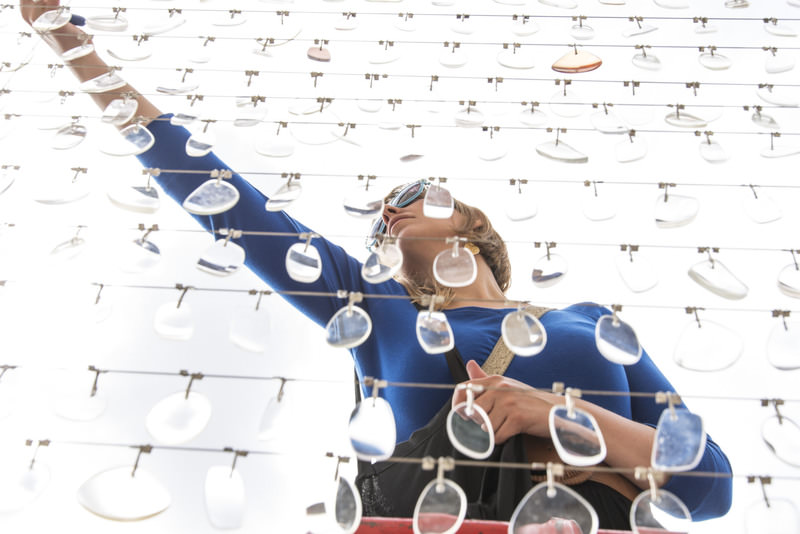 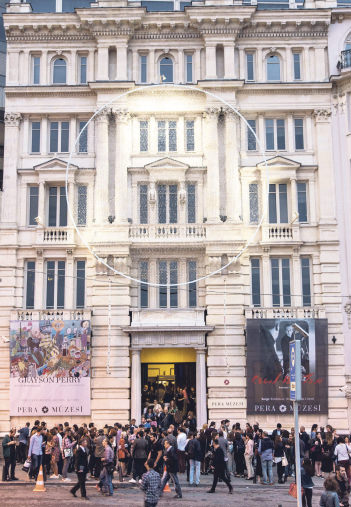 The building that houses Pera Museum was originally a hotel designed by Greek architect Achilleas Manussos. During the renovation for the museum's opening in 2005, the exterior façade of the museum was preserved.

Not so long ago, I came across a donation box in the lobby of Istanbul's Pera Museum. It invited people to donate their glasses for a future art installation. Not long afterward, I was surprised to see construction vehicles outside the museum and feared that a renovation was in place. A crane was carrying a group of men and women high above, and when I raised my head I realized they were equipped with glasses that they seemed to place onto the museum's façade. Inside the museum, Pera's head of film Fatma Çolakoğlu told me about what was going on. In order to celebrate its 10th anniversary, Pera Museum commissioned Canadian artists Caitlind r.c. Brown and Wayne Garrett to create special artwork for the museum's façade.

The building that houses Pera Museum was originally a hotel designed by Greek architect Achilleas Manussos. During the renovation for the museum's opening in 2005, the exterior façade of the museum was preserved. Heads of the museum decided to use this façade, designed in the late 19th century, as an artwork that commemorates the museum's 10th anniversary.

"The process of commissioning 'sea/see/saw' came about slowly through a year of conversations with Pera Museum, a site tour and much thought," Brown and Garrett said. "The team at Pera Museum first saw our work online. To celebrate their 10th anniversary, they reached out to us to see if we would be interested in creating a new work for the façade of their building. When we first visited Istanbul, we spent time observing the environment, the social situation, geography and cultural role of the space. Pera's façade belongs to the old Hotel Bristol, built in 1893, a beautiful building that we did not want to obscure. The architecture of the building is neoclassical - tall geometric forms, white stone columns - and we wanted to break the hard lines of the building without covering the inherent beauty of the façade."

The duo used more than 10,000 eyeglass lenses donated to the museum to create an installation that intended to, in their own words, "mirror the dynamic and shimmering surface of the Golden Horn, and introduce movement to the otherwise static structure, as drawn by the wind. Built from used glasses that merge to create a simple, geometric form, 'sea/see/saw' invites viewers to engage in a momentary shift of perspective."

"Before visiting Istanbul, we were already thinking about optics and natural light, vision and perception," Brown and Garrett explained. "After witnessing the complexity of the city, eyeglass lenses seemed like a beautiful metaphor for sight, vision and shifts in collective perspective. Lenses are very diverse - each prescription warps the world in a different way - and this became a microcosmic representation of the city-at-large. Aesthetically, we were quite interested in seeing what a giant mosaic of lenses would look like on the façade of the building, especially when arranged to look like wind moving over water."

A majority of the used lenses came from the Canadian Lions Eyeglass Recycling Centre (CLERC), an organization sourcing used eyeglasses from across Canada, refurbishing them and shipping them to visually-impaired people in 79 countries. Brown and Garrett found CLERC in their hometown, Calgary, and were delighted when they agreed to exchange a small donation for thousands of unusable eyeglasses that were otherwise destined for raw material recycling. In Istanbul, Pera Museum also put out a call for eyeglasses and placed a donation box in their lobby where the local community donated glasses. It became a cross-cultural material exchange, and they were grateful for the support from both cities.

When I asked them about the architectural difficulties they encountered during the building of the installation, Brown and Garrett did not have much to complain about. "The architectural difficulties were remarkably few. We were lucky to work with the restoration company Atölye Demirtaş Restorasyon Konservasyon Sergileme Üniteleri that re-integrated the neoclassical façade of the historic Bristol Hotel into the designs of Pera Museum over a decade ago. Thanks to the proactive team at Pera, as well as the restoration crew, this was one of the smoothest installs we've been a part of," the Canadian duo said.

When asked about the significance of the Golden Horn, which can be seen through the windows of the Pera building, Brown and Garrett talked about how much such places influenced their work. "When we first visited Istanbul to see Pera Museum, we found the city both beautiful and overwhelming, as well as maximal, rich, colorful, multi-sensory, gorgeous, gritty, inviting and terrifying, all in one breath," they said. "We found respite in the beauty of the Golden Horn: The gentle rippling on the surface of the water provides a calm and peaceful escape from the constant activity and movement of the city ... We wanted to simulate that natural effect and give viewers a chance to lose themselves in the motion. While we toyed with building an interactive piece, we settled on a simple kinetic work, wherein the wind would animate motion on the surface of the piece. When we returned to Canada, we made some small maquettes to test the motion, but they weren't large enough to observe complete waveforms in the wind. The effect created in the final sculpture is varied, depending on the environmental conditions. It ranges from a delicate sparkle to substantial waves created by the wind. As the individual pixels are translucent, the effect is subtle, but this also allows the details of the façade to twist and shift as they are reorganized through the moving lenses."

The title of their installation, "sea/see/saw," is part word-play, part material reference and part conceptual clue. For this sculpture, Brown and Garrett wanted to capture the subtle motion of water, which is where the "sea" part of "sea/see/saw" originated. "We view 'see' as a reference to the materiality of the work, which is made from 14,000 utilitarian eyeglass lenses, objects ubiquitous with focused sight and clear vision for a huge portion of the global population. 'Saw' comes from the idea of reflecting on what we see and thinking about perception, perspective and consciously processing our vision. 'See/saw' together reference the motion of a see-saw, which is similar to the analog motion of the lenses in the wind." "But 'see/saw' also acknowledges the movement of sight from the present to the past-tense," they explained. "It is a subtle way of implicating the history of the glasses and the people that used to own these utilitarian objects."
Last Update: Aug 01, 2015 12:52 am