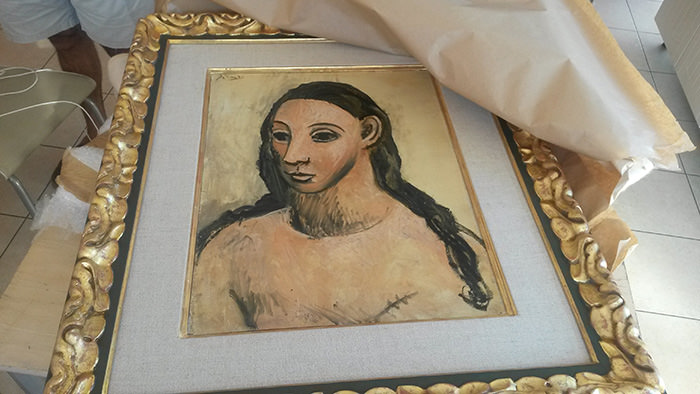 |AFP Photo / French Customs Office
by Aug 04, 2015 12:00 am
A Picasso painting worth 25 million euros and considered a national treasure by Spain - which had barred the painting's export - has been seized from a boat in Corsica, French authorities said Tuesday.

An attempt to export the painting, "Head of a Young Woman", to Switzerland last Thursday "drew the attention of French officials", the country's customs authorities said, with officers on the French Mediterranean island boarding the vessel the next day.

The ship's captain could only present two documents regarding the painting, one of which was a May 2015 Spanish court judgement labeling it a work of art and ordering that it not be taken out of the country, French officials said in a statement.

The painting, which French customs said was valued at more than 25 million euros ($27 million), is owned by Jaime Botin, a well-known Spanish banker whose family founded the Santander banking group.

The 79-year-old, who was formerly the banking giant's vice chairman, was not aboard the vessel, which is owned by the bank and flying a British flag, a customs authority spokesman said.

According to the spokesman, the export request was also not in Botin's name.

An export request was filed for the painting in December 2012 to move it to London, but was opposed by Spain's culture minister because there was "no similar work on Spanish territory" from the same period in Picasso's life.

This year, a Spanish court sided with the authorities and declared the work of art "unexportable" on the grounds it was of "cultural interest" and could not leave the country.

It rejected the arguments of Botin, who said that the work should not be considered on Spanish territory because it was on a vessel flying a British flag.

Spanish police confirmed that "an inquiry has been ongoing for some time" but declined to give further details.
Last Update: Aug 04, 2015 9:15 pm
RELATED TOPICS