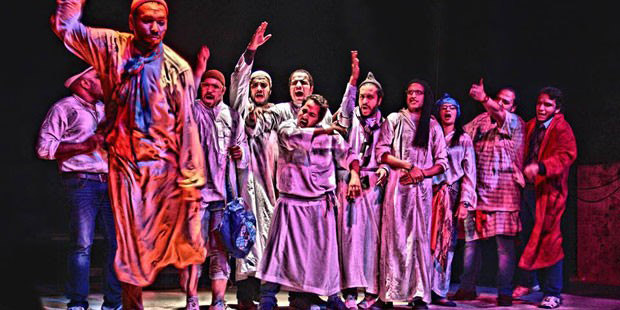 by Anadolu Agency Aug 04, 2015 12:00 am
For years, theater was an outlet through which Egyptians could express their political views. More recently, however, plays with political themes have lost ground to comic productions, with most playwrights preferring to avoid contentious issues that could land them in trouble with the authorities. Within the past five years, nearly 32 plays have been presented at Egypt's state-run theaters - almost all of which were comedies.

"Political plays of the old fashion type are no longer welcomed by Egyptian audiences," theater director Khaled Galal told Anadolu Agency (AA). "This has required us to insert social and comic sketches into our work." Galal recently directed a play titled "Coffee without Sugar," which tackled recent political and social developments in Egypt - albeit sarcastically. "I'm a comedian who makes plays brimming with sarcasm, not purely political ones," he said.

Recent years have seen a number of plays banned by the authorities for discussing overtly political issues. In 2011, the authorities banned the play "Khedive" - after a 17-year run in Egyptian state theaters - for focusing on official corruption in Egypt. Another play, "1980 and Upwards," which criticized Egypt's ruling regime, was likewise banned. And a play originally produced in 1972 - which had explored the reasons for Egypt's military defeat by Israel in the 1967 Arab-Israeli War - was similarly banned by the state's censors. "The state doesn't like what we're doing," director Mohamed Gabr said. "We expose society's ills."

Egypt has been dogged by turmoil since a popular uprising in 2011 swept autocratic President Hosni Mubarak from power. In mid-2013, Mohammed Morsi - the country's first democratically-elected leader - was ousted by the military after only one year in office. Last year, Abdel-Fattah al-Sissi, a former defense minister, assumed the presidency.

Fatouh Ahmed, director of Egypt's Theatrical Art House, believes the current preponderance of comic plays does not necessarily mean the end of politically-themed plays in Egypt. "There's a new form of the politically-themed theater, which relies mainly on irony and comedy, for which there is a greater demand ... rather than purely political plays, which face the threat of censorship," he said. Comedian Sameh Hussein, for his part, said directors tended to shy away from strictly "political" plays to avoid confrontation with the authorities. "Political themes often lead to confrontation with the state," Hussein told AA. Hussein is currently starring in a play titled "I'm the President." Based on a story derived from Russian literature, the play tackles the issue of institutional corruption. "Our version of the play examines corruption in Egyptian society, the difficulties facing Egyptian youth and public-sector corruption - all in a sarcastic way," he said. Art critic Magda Mouris also stressed that today's playwrights favor comedy, "for which there is popular demand and which stands to make a profit ... The history of Arab theater is full of political productions, many of which were ultimately banned."
RELATED TOPICS