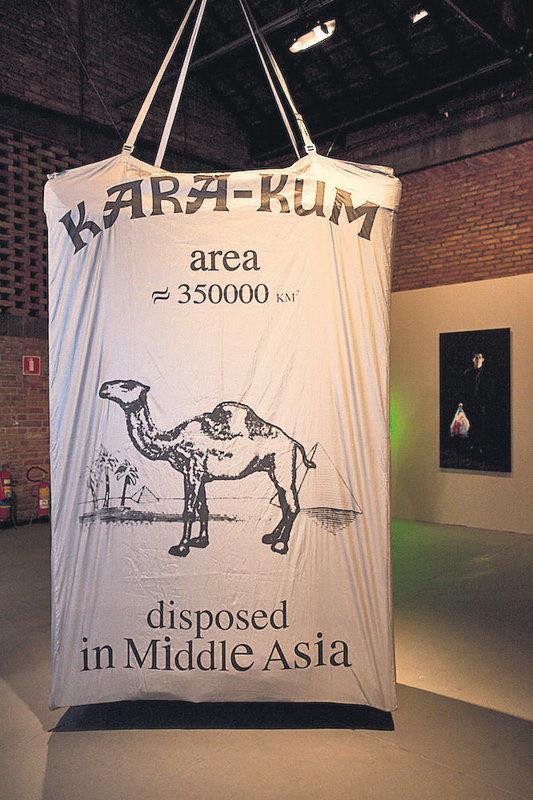 Rampa Art Gallery will exhibit the works of accomplished artist and curator Hüseyin Bahri Alptekin, who is known around the world for his extraordinary paintings and sketches as well as his philosophical studies

The Hüseyin Bahri Alptekin retrospective exhibition, titled "Demokratik Lüks" (Democratic Luxury), will open on Sept. 2. The exhibition that studies the thought processes of Alptekin by including selected drawings, sketches and notes from his archivewill run until Oct. 14. Alptekin contributed to cultural production not only as an artist but also as a philosopher, academic, writer and curator.

The exhibition will be co-organized by Rampa and the Museum of Modern Art in Belgium, Antwerp and will be displayed at both venues. This comprehensive retrospective brings Alptekin's works that were produced before the new millennium and in the last 10 years together. The display features photographs, sculptures, installations, neon texts, videos and collages that the artists has produced since the early 1990s.

"Demokratik Lüks" includes Alptekin's co-initiatives with the Bunker Research Group, the Barn Research Group (BRG) and other artists. Moreover, the artist's works stand out with Alptekin's study of the "Sea Elephant Travel Agency," which is about establishing a floating laboratory on the Black Sea that stands out as the artists intends to contribute to critical discussions and artistic exchanges by following the same route that Jules Verne followed in his "Kéraban the Inflexible."

Artist, writer, academic and curator Hüseyin Bahri Alptekin (1957-2007) studied aesthetics, philosophy of art and sociology in Ankara and Paris, He worked as a photographer for SIPA Press and wrote for various publications as an art and design critic. Alptekin lectured at Ankara Bilkent University and Istanbul Bilgi University and he attended various international symposiums on contemporary art. Starting in the early 1990s, Alptekin focused on an artistic production that explored the effects of globalization, immigration, and exile, cross cultural image circulation and anonymous production through travel, personal histories, and archives. He created a multi-layered visual language by using different materials and styles in his photo installations, collages, videos and objects such as a truck full of plastic balls. His installation "Don't Complain" displayed at the 52nd Venice Biennale as the only piece in the Turkish Pavilion in 2007.

The same installation also showcased within the exhibition "Global Cities" at the Tate Modern in London. From 2000-2004, he ran a non-profit artists' collective called "Sea Elephant Travel Agency." He loved working with other people and producing collaborative works. His early period works with Michael Moris, "Grup Grip-in" that he founded with his students at Bilkent University, the meetings arranged at LOFT, the Bunker Research Group and Barn Research Group (BRG) with Camila Rocha are some of the examples. Sao Paulo Biennial (2013), Çetince Biennial (Montenegro), which brought him the UNESCO award, "How Latitudes Become Forms" at Walker Art Center (2003), Manifesta 5 (2004), second and third Tirana Biennial (2005) and Istanbul Biennial (1995, 2005, 2009) are among the festivals and art events that he contributed to. The artist's solo exhibitions are "Festival Istanbul Agora - Hüseyin Bahri Alptekin", SESC Pompeia, São Paulo (2013), "I Am Not A Studio Artist," SALT, Istanbul (2011), "Global Mockery," Maison de Folie de Wazemmes, Lille (2009), and "Kriz: Viva Vaia," Dulcinea Gallery, Istanbul (1999). Following his death, SALT took over Alptekin's library and established a library and an archive of his printed and digital photographs, note books, objects and personal belongings.
Last Update: Aug 11, 2015 1:53 pm
RELATED TOPICS