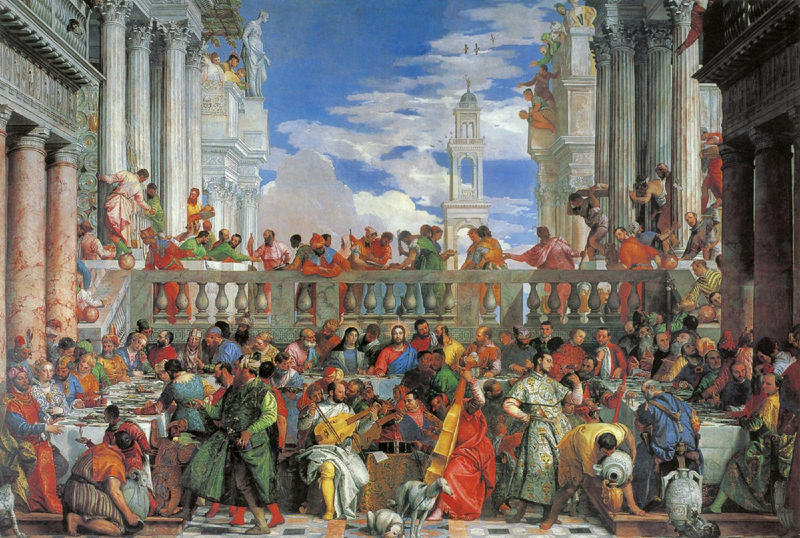 by Aug 18, 2015 12:00 am
Boasting 35,000 works of art and more than 380,000 items, the Louvre Museum in Paris pulls 8 million tourists each year, yet Turkish tourists have not shown much interest in the prestigious building extending over 60,000 square meters. However, there are art works that will draw the interest of, especially, Turkish travelers. Available in the same hall as Leonardo Da Vinci's famous painting Mona Lisa, a work depicts Ottoman Sultan Suleiman the Magnificent with other period emperors. Created by Italian painter Paolo Veronese, "The Wedding at Cana," which is 66 square meters, illustrates the Ottoman Sultan, Jesus Christ, Holy Roman Emperor Charles V and Francis I of France sitting at the same table.

Dating back to 1562-63, the painting was made in 15 months. "The Wedding at Cana" tells a story from the Christian New Testament in which Jesus asks servants to fill jugs with water, which he then turns into wine. In the museum's Islamic artwork section, the sword of Sultan Suleiman the Magnificent and İznik ceramics are on display for visitors. A list showing the donator names features Ottoman Sultan Mahmud II and Sultan Abdülhamid. Before leaving the museum, visitors are recommended to take a look at book stores, where they can find books on the life of Sultan Suleiman and İznik ceramics. Guidelines in Turkish are not currently available at the museum, yet more tourist groups from Turkey can pay a visit to the country's biggest museum during their stay in France.
RELATED TOPICS