French actors to perform legend of Köroğlu in Capadoccia 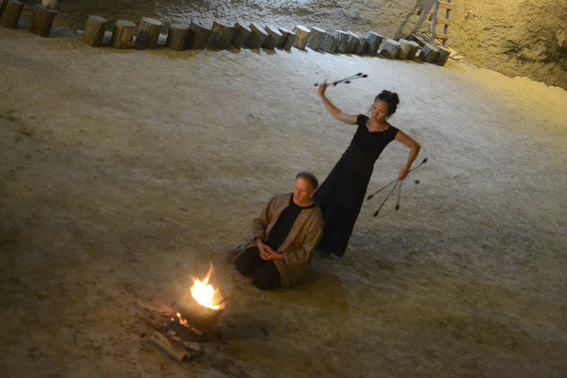 by Daily Sabah with IHA Aug 19, 2015 12:00 am
Inspired by Sufism, director Ali İhsan Kaleci - who has continued his theatrical projects in Paris for 20 years - will stage the legend of Köroğlu with an international cast in Uçhisar, Cappadocia, from Aug. 21-23. According to Turkish daily Hürriyet, the actors - including Anne Donard, Bastien Ossart, Erica Letailleur, Martin Vaughan Lewis, Neslihan Derya Demirel, Ori Gershon, Philippe Dov Cohen and Tapa Sudana - will perform the play in Turkish. Besides a single Turkish performer, the cast is composed completely of French theatrical performers.

As part of his "Seyirler" (Views) project, created by the CRT Blaise Theater Research and Investment Center and supported by the EU Civil Society Dialogue, Kaleci gathers many international artists and researchers in Cappadocia, one of Turkey's most famous tourist attractions. Embracing Sufistic elements, the play depicts the journey of the epic character Köroğlu, who stands against injustice while seeking immortality. The legend of Köroğlu illustrates the life of people spreading from the Balkans to the Uighurs of Xinjiang. During the theater days, Balinese actor Tapa Sudana and Jean-Jacques Lemetre, the musical director of Theatre du Soleil, will hold workshops in Cappadocia for the first time. Kaleci's project is a meeting point for theater, dance, music and other humanities, and it has been designed based on an interdisciplinary approach. The music of the play "Yer ile Gök Arasında Köroğlu" (Köroğlu between Land and Sky) was composed by Anar Yusubov, Ramin Rzayev and Simare Imanova.
RELATED TOPICS