Istanbul Biennial to rule over the city for 2 months 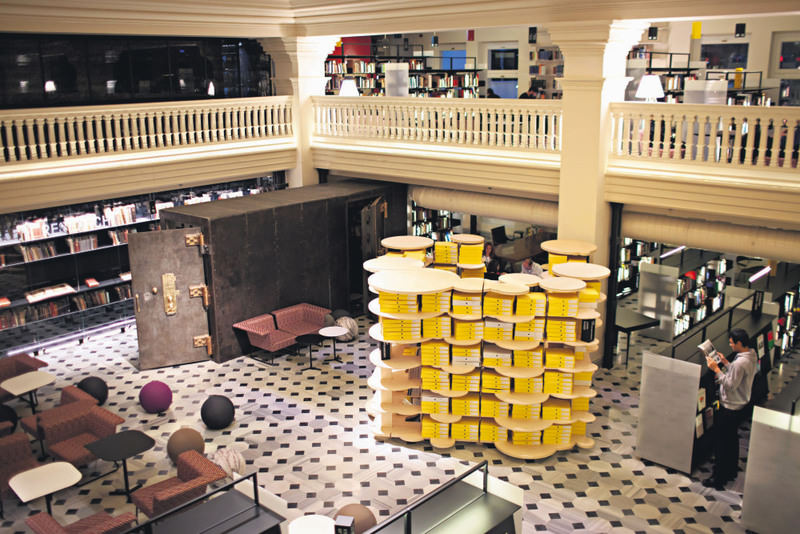 This year's Istanbul Biennial with the theme: ‘Saltwater,' will turn the city's highlighted venues into art spaces from September to November

With the theme "Saltwater: A Theory of Thought Forms," the Istanbul Biennial' will return to host its 14th year from Sept. 5 to Nov. 1. Organized by the Istanbul Culture and Arts Foundation (İKSV), the biennial will present more than 1,500 works of art by more than 80 participants from Africa, Asia, Australia, the Middle East, Latin America and North America. The biennial will take place in museums as well as temporary spaces on land and sea such as boats, hotels, former banks, garages, gardens, schools, shops and even private homes. Curated by Carolyn Christov-Bakargiev, the two-month event will cover a number of subjects such as oceanography, environmental studies, marine archaeology, Art Nouveau, neuroscience, physics, mathematics and theosophy.

Works range historically from an 1870 painting of waves by Santiago Ramon y Cajal, who received a Nobel Prize in 1906 for discovering the neuron, to the abstract thought forms of Annie Besant and Charles Leadbeater and a multichannel installation by William Kentridge inspired by Leon Trotsky's passage through Turkey. Visitors will encounter group exhibitions at Istanbul Modern, ARTER, the Italian High School and the Galata Greek Primary School. Most of the biennial venues, however, will host the work of a single artist or artist collective. This year's biennial will be very comprehensive, as visitors are recommended to set aside three days to visit the exhibition venues. Here is a possible biennial route for visitors and enthusiasts, which will take them on a historical journey around the city:

Visitors can start by visiting SALT Galata, a former Ottoman Bank designed by French Levantine architect Alexandre Valluri in the 19th century. The next stops can be Kasa Gallery at the Minerva Inn, a historical landmark built in 1913, and the Galata Greek Primary School with its neo-classic architectural style. Istanbul Modern, a former cargo warehouse, and non-profit exhibition space DEPO, which was used as a tobacco warehouse until the 1950s, will be the other biennial locations in the historic Beyoğlu neighborhood. Another biennial venue will be the Museum of Innocence, which was acquired by Nobel-laureate novelist Orhan Pamuk. The next stop on this walk could be the Italian High School on Tom Tom Kaptan Street. Here visitors will find new works of five artists on different floors. There will be two other biennial venues in the Pera quarter of Beyoğlu: Pera Museum, located in the former Bristol Hotel, designed in 1893 by architect Achille Manoussos, and a room in the Adahan Hotel, a building commissioned by the Camondo family in the 19th century and restored in 2007.

Day 2: From Kabataş to Büyükada

Biennial visitors can take a ferry from Kabataş to Kadıköy and Büyükada, which is the largest of the Princes' Islands on the Asian side of Istanbul. The biennial's Kadıköy venue will be a small, street-level artist studio in Yeldeğirmeni. Five rooms and the courtyard of the Hotel Splendid Palas will also host the biennial exhibition and part of its public programs. The other biennial venues on Büyükada include Rizzo Palace, which was built in the 19th century, was used as a residential house until the '60s and served as a social housing pension until 2010; Mizzi Mansion, built in the second half of the 19th century and renovated by prominent Italian architect Raimondo D'Aronco; Çankaya 57, a twin house built by an Armenian tradesman for his daughters in the early 20th century where Russian politician Leon Trotsky is said to have lived for a little while during his exile on the island - and was recently used as a setting for a Turkish TV series; and the Trotsky House, also known as Yanaros Mansion, built in the 1850s by Nikola Demades, which is where Trotsky lived between 1932-1933.

There will be two biennial venues in Şişli district. The old and new headquarters of the Hrant Dink Foundation and Agos, an Armenian weekly published in Istanbul in both Turkish and Armenian. The chief editor of Agos and a pivotal figure in the human rights and reconciliation movements in Turkey, Hrant Dink, was assassinated in January 2007 outside this building. Located in Sarıyer district, Rumelifeneri, a coastal village near the northwestern end of the Bosporus Strait where visitors can see the construction of Istanbul's third bridge, will host an artist's work at the lighthouse.

Admission to the 14th Istanbul Biennial is free of charge at all venues except the Museum of Innocence.
Last Update: Aug 22, 2015 1:39 am
RELATED TOPICS