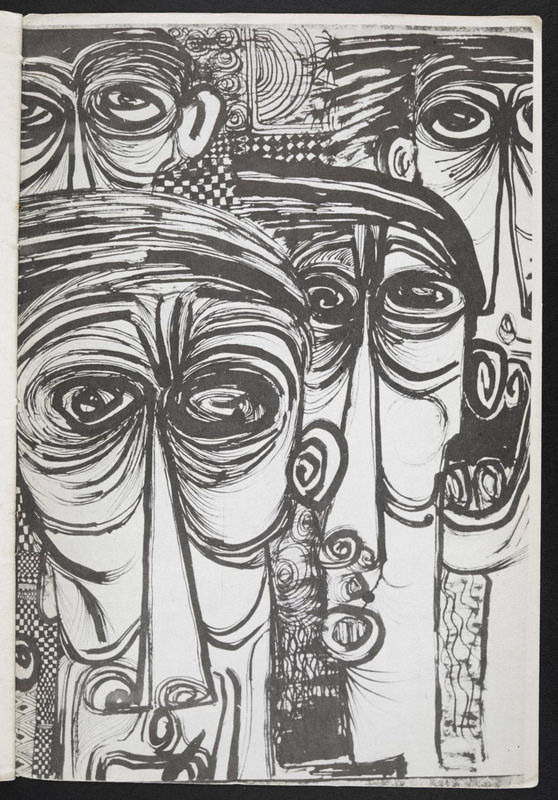 by Daily Sabah Aug 24, 2015 12:00 am
The "Arab Spring Notebook" is a series of black ink drawings by Ibrahim El Salahi, one of the most renowned African artists as well as a leading figure in African Modernism; his response to the Arab Spring can be viewed at Galerist's project space Studio from Sept. 1 to Oct 3. El Salahi's paintings, which are in a single sketchbook, can be seen for the first time since an exhibition at the Tate Modern in 2013, becoming the first African artist to be given a full retrospective at the museum.

The Sudanese artist attended Khartoum School of Design, majoring in painting, and was also involved in calligraphy from an early age. Then, he studied in London at the Slade School with a government scholarship and returned to his homeland to become a lead artist in the Khartoum School at the Technical Institute. In Sudan, he was imprisoned without any charges for six months, exiled and finally found freedom, arriving in Amsterdam in 1996. In 1998, he moved to Oxford, England, where he has been living ever since. His works are a combination of African, Arab and Western artistic traditions and are mostly semi-abstract.

El Salahi, born in 1930, was elderly and living in England at the time of the Arab Spring, and he observed the uprisings through the media like many. Considered as a pioneer in Sudanese art, El Salahi's work developed over the years, and lately his work has usually consisted of lines drawn using mostly white and black paint, like the "Arab Spring Notebook."

According to El Salahi, the Arab Spring revealed energies that have been suppressed for a long time by authoritarian regimes. He viewed the revolts as a rebellion against corruption and injustice, and his views are reflected in his ink drawings, which mostly depict tyrants and their victims. Since he suffered the injustice of tyranny in prison, El Salahi's took on the events personally and his views and feelings about the dramatic events are thus reflected in his work, which depicts mostly waves and currents of water and shadowy figures. The exhibition, which is both an artistic and historical documentation of the uprisings against tyranny in the Arab World that started in Tunisia in 2010, can be visited at the Galerist's Studio, located on Müellif Street, which connects the Galata neighborhood to Şişhane in Istanbul.
RELATED TOPICS