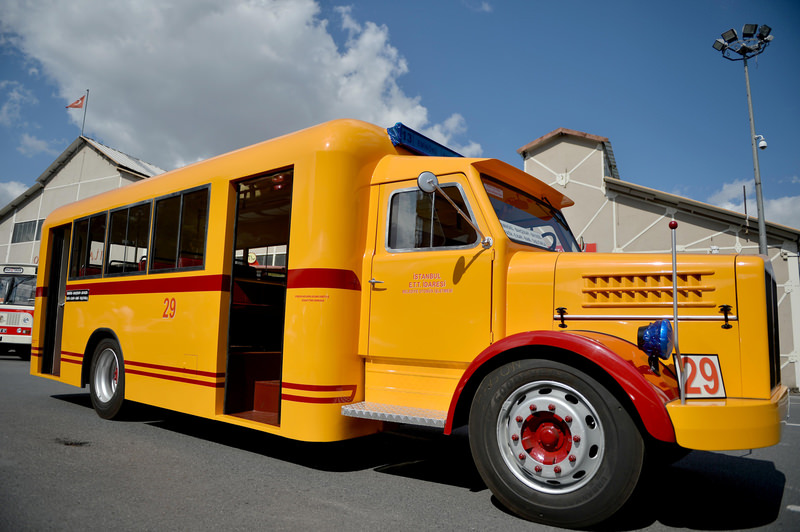 by Daily Sabah Aug 28, 2015 12:00 am
Scania Vabis busses, which were used as public transportation in Istanbul during World War II, have been re-manufactured according to the original design by Istanbul Electricity Tram and Tunnel (İETT) and will offer services in Istanbul during Qurban Bayramı (The Feast of Sacrifice), also known as Eid al-Adha. The nostalgic bus also has a music system in order for passengers to listen to music from the 1940s.

Head of the İETT Vehicle Maintenance Department Aydın Karadağ offered insights about the nostalgic vehicle to Anadolu Agency (AA) at the garage in Topkapı. He said when the Renault-Scemia busses, which were purchased by İETT in 1927 were removed from İETT's fleet in 1942, Istanbul had no busses for public transportation for a while.

During this time, public transportation was undertaken by the electric trams dating back to 1913. Realizing that urban transportation could not continue only depending on the rail, İETT began working to establish an alternative fleet of busses with a number of modern vehicles. Unfortunately, it was very hard to purchase vehicles due to the ongoing war and understanding that there was no way of buying busses, İETT officials decided to purchase 15 Scania Vabis busses from Sweden in 1942.

The first bus, which was manufactured on the chassis of the original Scania Vabis truck, aroused curiosity and the bus stops in Taksim and Beşiktaş were full of people who wanted to see the new buses. Although the bus looked like a truck from the front, it has a passenger space with two doors and three windows.

By 1944, the number of Scania Vabis busses reached 15 and these vehicles offered services for six years. The trucks that were converted into busses were put out of service in 1948-49 following the purchase of more comfortable models from Sweden in 1947-48.
Last Update: Aug 28, 2015 3:34 pm
RELATED TOPICS