Exploring ‘Our Wounds, Our Ballads' at an Istanbul gallery 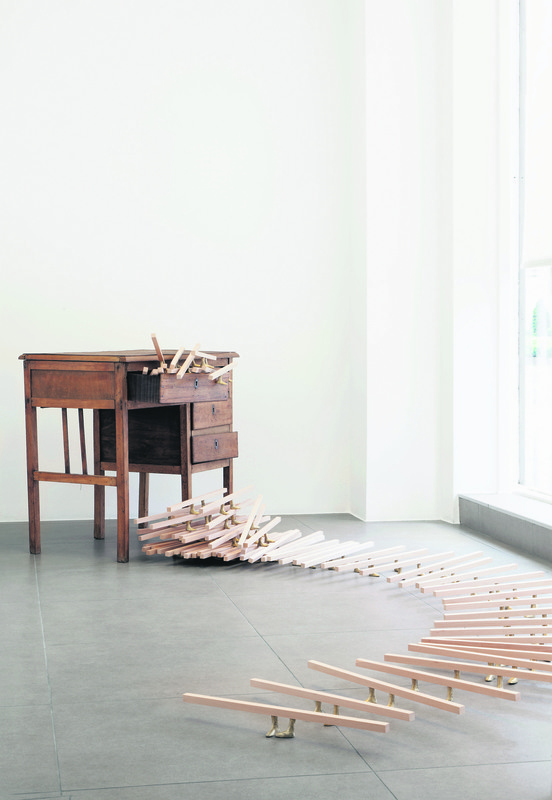 Art ON gallery's group exhibition ‘Our Wounds, Our Ballads' derives its title from the famous Greek poet Yannis Ritsos's poem and features works by such names as Hera Büyüktaşçıyan, İpek Duben and Murat Germen, as well as painted stones by Ritsos that are on display in Turkey for the first time

Not long ago I was pleasantly surprised to come across a gallery window on Istanbul's Akaretler Street. During my previous walks from Nişantaşı to Beşiktaş I somehow managed to overlook the poetic phrase on the window of art ON gallery, which reads: "Our Wounds, Our Ballads." This is the title of the gallery's ongoing exhibition, which has two centerpiece works. The first of these is a painted pebble stone by the poet Yannis Ritsos. The second centerpiece is made of wood, bronze and a school desk, and is on display at the entrance. "The Stranger in My Throat" is one of the newest works by Hera Büyüktaşçıyan, one of my favorite artists. Büyüktaşçıyan's work, "The Keepers" was among the highlights of the Armenian Pavilion held at the Mekhitarist Monastery on the Island of San Lazzaro degli Armeni at this year's Venice Biennale. The Armenian Pavilion won the Golden Lion for the best national pavilion, and it was great to see Büyüktaşçıyan's work getting increased attention from the art world.

I asked Necmi Sönmez, the curator of the exhibition, about the title of the show, and his decision to put "The Stranger in My Throat" at the entrance. "The phrase 'Our Wounds, Our Ballads' was adopted from the eminent Greek poet Yannis Ritsos and his poem 'Resemblance,'" Sönmez explained. "The title reflects the multi-layered structure of this show. Each invited artist presented different works, and the dialogue between them produced the so-called 'inner circle' that contributes to common artistic research in various disciplines. This exhibition is the second edition of a series of group shows at art ON gallery where we aim to establish new, unseen associations between poetic and visual images."

Sönmez spent his youth studying art in different European cities, including Frankfurt, Mainz, Paris and Newcastle. He worked as an independent curator and curated the works of young Turkish, German and Dutch artists in the mid-1990s. Having worked as a project assistant at two leading modern art museums in Vienna, Sönmez received his doctorate in 2001.

Sönmez's interest in Büyüktaşçıyan's work began five years ago. "I was interested in Hera's work and I have been following her since 2010," Sönmez said. "Hera was in Athens to introduce her solo show when I wrote to her about my ideas about this exhibition. My invitation came as a surprise for her because without communicating to each other, we were both reading and thinking about Ritsos simultaneously. Hera's mother is Greek, but she does not speak Greek. It was a painful experience and a starting point for her work. While working in Athens, she read one of Ritsos' most popular long poems, 'Old House.' Her reflections were complex and devious. We acknowledged that poems are not crossword puzzles to be solved or a source-hunter's labyrinth. Then we decided to show a new interpretation of her Athens-installation here in Istanbul."

Sönmez talked about an invisible, overlapping line between Athens and Istanbul. "Not being able to speak one of your parents' languages is an inner wound," he said. "From this pain, Hera learned the poetic possibilities and created personal and surrealistic imagery that reflects the history of our beloved Istanbul."

During the preparation period, the gallery team visited the poet Özdemir İnce, who translated the complete works of Ritsos into Turkish with the help of the Greek poet over a 25-year period. "He and his wife Ülker were close friends of Ritsos," Sönmez explained. "They frequently visited Ritsos on Samos, the island where the poet has a summer house and a large studio. Ritsos was an autodidact painter; he illustrated his own books with enigmatic drawings. Ritsos painted stones, ceramics and small-sized sculptures. He donated two painted stones to Ülker and Özdemir İnce every year. We saw these wonderful works at their home and wanted to exhibit one of them in a direct confrontation of the original voice of Ritsos."

The installation of the painted stone and what Sönmez calls "the dark voice of Ritsos" are located in the small corridor of the gallery. This, according to the curator, produces a "moment of presence" that reflects the concept of this exhibition.

"Our Wounds, Our Ballads" presents works by artists from different generations and nationalities. Burak Bedenlier's steel works "Melancholy" and "Dream" are exhibited next to Jochen Proehl's camera obscura fine art print "Mars." In the main space of the gallery İpek Duben's work, "Frontier," brings together a variety of materials, including nails, thread, wire, wood and synthetic silk. Serkan Taycan, who recently had a solo exhibition at Co-Pilot gallery, is represented here with his print "With or Without."

I wondered if Sönmez have a specific "wound" in mind while preparing the exhibition in which these artworks responded as ballads. Was the wound that he quoted for the title of the exhibition an abstract or a specific one? "It is extremely difficult to speak about wounds," Sönmez said. "Everyone has their own interpretation. We see in the exhibition how the artists deal with them through different metaphors. But the desire to draw from our personal histories is apparent. While visiting this exhibition, we can feel and interpret how our wounds are expanded for their mystifying, arcane significance. This is wonderfully evident in a laconic world that we are facing every day."

Art ON had an exhibition last year that explored the world of the eminent Turkish poet İlhan Berk. When I was about to leave the gallery, I was reminded of the importance of this poetic focus in the art world and the possibilities offered by Turkish poetry for contemporary artists. Then I remembered the Ritsos poem that gave this exhibition its title: "Stars in the disheveled cistern / cistern in the middle of the old courtyard / just like the mirror of the locked room. / Pigeons around the cistern / flower pots in the framework of the moon painted with lime / our ballads, our songs around our wound."
Last Update: Aug 29, 2015 1:06 am
RELATED TOPICS