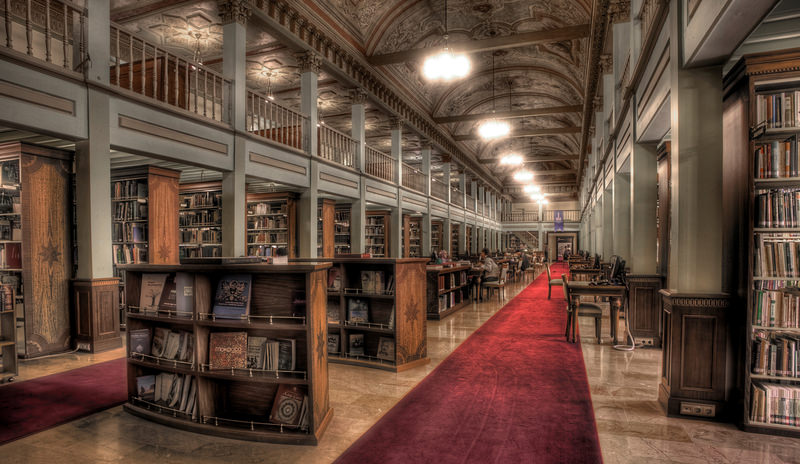 by Zeynep Esra İstanbullu Sep 08, 2015 12:00 am
The library of Islamic History, Art and Culture (IRCICA) which has become a source of pride for Turkey thanks to its international projects and services, shines with its rich collection. Halit Eren, the general director of IRCICA, said the library has located one of the historical buildings within Yıldız Palace, which features over 400,000 books, and the collection offers researchers the chance to study in a priceless archive. The IRCICA Library continues to meet the demands of academics all over the world and is home to cultural treasures of not only Turkey but also the entire Islamic world. The contemporary publications, rare books, manuscripts and technical services are located in the Çit Pavilion of Yıldız Palace. Books, dissertations, grey publications, maps, audio tapes, CDs, DVDs, micro-film and calligraphy pallets, the archive or the institution and people are preserved in the armory of the palace. The armory is also an easy working area for people thanks to its open-shelf design.

The priceless library collection specializes in Islamic civilization, especially history, geography, science, art, architecture, religion, literature and philosophy. The collection is composed of materials in 145 different languages including Turkish, Arabic, English, French, Persian and German as well as the lesser known languages of Swahili and Zulu. Eren said that they studiously examined all the publications in their research facilities and continued, "The library shelters valuable and rare publications that are unique due to their physical condition and publication dates. The historical photography archive, personal archives of prominent people and 7,000 calligraphy pallets, which belong to the calligraphy competition that has been held by IRCICA since 1986, are among the treasures of the library."

Furthermore, the library is home to numerous printed publications that are very rare. For instance, all the publications by İbrahim Müteferrika, some rare manuscripts written in western languages, official newspapers of the Ottoman Empire, all issues of the first newspaper in Turkish Takvim-i Vekayi, and yearbooks and chronicles of the Ottoman Empire are among the precious belongings in the library. IRCICA published the first copies of the Quran and prepares bibliographies regarding meaning and explicating, giving place to the copies of the Quran in different languages and made by different calligraphists. The IRCICA library continues its active collaborations with 687 people and institutions from 75 different countries and includes private collections of various men and women of science and culture.
RELATED TOPICS