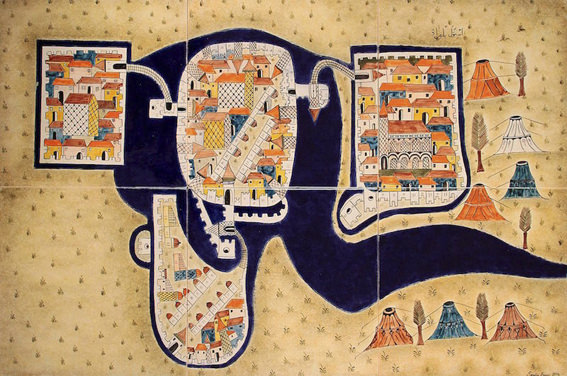 Born in the Bosnian town of Visoko, Ottoman Renaissance man Matrakçı Nasuh's life and time are thoroughly explored in the ‘16th Century Genius Matrakçı Nasuh' project, which starts tomorrow and runs through Oct. 15 at the Belgrade Ethnography Museum 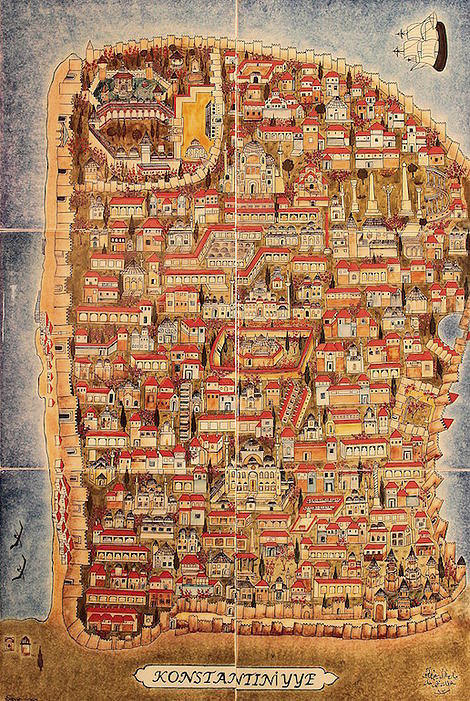 One of the displayed works (above) is a Matrakçı Nasuh illustration of Istanbul's Historical Peninsula on a tile board, while another one (below) is a scene of Genoa, Italy. 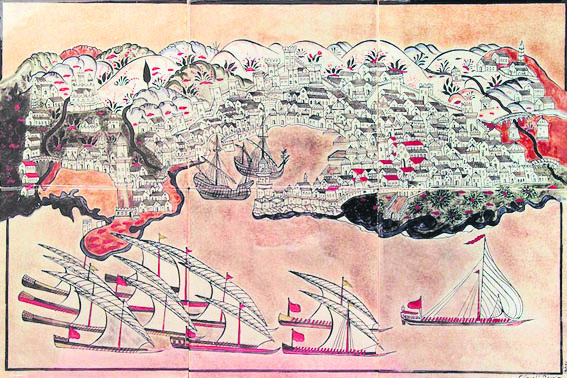 Marking the occasion of the UNESCO 2014-2015 Matrakçı Nasuh Commemoration and Celebration Anniversaries, the project keeps Nasuh's contributions alive not only through an exhibition but also a documentary, an album featuring 16th-century Turkish music and a special stamp. Supported by the Presidency of Turkey, the exhibition was first on display in Sarajevo in May. From tomorrow until Oct. 15, it will be on display at the Belgrade Ethnography Museum. Curator Beste Gürsu, the president of the İKASD, shared details about the project and the life of the Ottoman art master with Daily Sabah.

DS: How was the project developed?

Gürsu: The İKASD gathers different disciplines in all its projects. Their common point is to introduce Turkey as well as its history, culture and arts to international platforms. Boasting many qualifications, Matrakçı Nasuh, a 16th-century Ottoman genius, recorded our rich history in written accounts and his other work contributed to making our historical values permanent. The İKASD started a project on Matrakçı Nasuh in 2012 by bringing all these elements together. Our project gained momentum with great motivation when UNESCO announced 2014 and 2015 as the "Years of Matrakçı Nasuh," marking the 450th anniversary of his death. The İKASD then submitted the project to UNESCO's National Committee and it was approved. Our disciplines and instruments helped us to enrich and develop the project. Designed in a three-year period, the project, "16. Yüzyıl Dahisi Matrakçı Nasuh" (16th Century Genius Matrakçı Nasuh) is realized under the auspices of President Recep Tayyip Erdoğan, which honors our efforts. Twelve prominent female artists illustrated Matrakçı Nasuh through different art disciplines in the project's exhibition section. They used traditional tiles to describe him as an artist, especially a muralist. Calligraphy was implemented to illustrate his poetry and talent in this art form. Through the use of modern art, Matrakçı Nasuh was depicted as a mathematician, sportsman and sword master.

However, art was insufficient to show his qualifications. To understand his skills as a historian and philosopher, we needed to comprehend his written work. The İKASD released a replica print of his manuscript "Tarih-i Sultan Bayezid" (History of Sultan Bayezid), which is featured in the Topkapı Palace's Rewan Manuscript Collection. The manuscript's new edition was prepared by Reha Bilge and translated into Turkish by Professor Mertol Tulum. The book was published with the support of Turkey Turing and Automobile Institution President Bülent Katkak. The İKASD collaborated with many state institutions for the project. Following our meetings with the Culture and Tourism Ministry, we decided to conduct a study of 16th-century Ottoman classical music. An album "16th century Turkish music" was released under the artistic directorship of Associate Professor Murat Salim Tokaç by the Istanbul State Turkish Music Research and Practice Society under the Ministry of the Culture General Directorate of Fine Arts. The Turkey Turing and Automobile Institution also supported us. The Department of Valuable Papers at the PTT released a special stamp commemorating him. The next step was a documentary that would tell the story of his life. This project created sub-categories one by one.

DS: Could you tell us more about Matrakçı Nasuh?

We consulted some respected historians and conducted thorough research, yet we were unable to find his exact date of birth. What we know is that Matrakçı Nasuh was brought to the palace at an early age. At the time of Ottoman Sultan Bayezid II, he attended the Enderun School. He saw the ruling periods of Sultan Selim I and his son Süleyman the Magnificent. Matrakçı Nasuh is known for his talents in many fields. His real name was Nasuh bin Karagöz bin Abdullah el-Visokavi el-Bosnavi. The word "Bosnavi" indicates his Bosniak origin. After we learned that he lived in Visoko, a town near Sarajevo in Bosnia-Herzegovina, I paid a visit there and met Professor Senad Hodovic, the head of the Visoko Museum and some other Bosnian historians. Unfortunately, I could not find additional information about him. A street in the town and a culture center established with the contributions of the Altındağ district municipality were named after him. Although there is very little information on his life, Matrakçı Nasuh was named as a 16th century genius for his works, innovations and qualifications. He was an artist, historian, swordsman, sportsman, philosopher, poet and mathematician. He contributed to the development of traditional Turkish arts by bringing new styles to miniatures and Hüsn-i hat. His paintings feature similar characteristics to those of Renaissance painters. In history, he was called the Leonardo da Vinci of the East. Thanks to his mastery in many fields, Ottoman Sultan Süleyman the Magnificent ordered the public to pay respect to Matrakçı Nasuh and called him a master and headman, as he was a unique name in Islamic arts. We do not have much information on his birth, but he died in 1564 and left behind significant works whose influence continues.

DS: What kinds of works of art will visitors see in the exhibition?

The exhibition includes works showing Matrakçı Nasuh's artistic qualifications. The tile works were designed by a team of nine female tile artists under the supervision of tile artist and muralist Sevim Ersoy over nearly two years. They reflect a selection of his maps on tile boards, one of which is "Beyan-ı Menazil-i Sefer-i Irakeyn" (Chronicle of Stages of Campaign of Iraq and Persia) on his eastern expeditions and the other is "Tarih-i Feth-i Şikloş Estergon İstol-Belgrad" (History of the Conquest of Siklos, Esztergom and Üstol - Belgrade) on his western expeditions. These works illustrate Nasuh as a painter and muralist. Calligraphist Hülya Cansız Gür created a total of 10 boards featuring a selection of Nasuh's verses about the expeditions, written in the "celi sülüs" and "diwani" calligraphy styles. They were very popular in the 16th century and also performed by Nasuh himself. Through these works, we addressed Nasuh as a calligraphist and poet. On the other hand, painter Sema Bicik presents Nasuh as a mathematician and swordsman with her painting on canvas based on Nasuh's topographic drawings. We are very happy to explain, transfer and commemorate the qualifications of Matrakçı Nasuh through 41 works of art.

DS: Which countries will the exhibition travel to? How did you choose them?

As we carry on an Ottoman-era project, it might be true to say that it will take an "expedition" to other countries. While working on the selection of maps, we decided on a route similar to those designed for the eastern and western expeditions. Although this project is entitled "the 16th Century Genius Matrakçı Nasuh," it is also about the 10th sultan of the Ottoman Empire, Süleyman I, known as "Süleyman the Magnificent" in the West for his successful campaigns and "Süleyman the Lawgiver" in the East for his justice. The project is centered on the works of Nasuh who wrote about Süleyman's campaigns, an unforgettable figure in our history. The route highlights the number 10 in Süleyman's life (This number is believed to give luck and Süleyman I is the 10th Ottoman emperor) who will be commemorated on the 450th anniversary of his death next year. Our project first appeared in Sarajevo, the homeland of Nasuh and ran from May 4 to May 25. Overseen by Emine Erdoğan, the exhibition opened in Vijecnica, which was built as a municipality building in 1896 by the Austro-Hungarian Empire and turned into a national library following World War II. The library was destroyed during the Bosnian War and restored a year ago. I believe that it was very meaningful for the project to start its journey in Sarajevo. Our second stop is Serbia. The project will be displayed in the Belgrade Ethnography Museum starting Sept. 15 and run until Oct. 15. Following Belgrade, the project will visit Rome, Ankara, Istanbul, Paris, Vienna, Tokyo, New York and Budapest, marking the 450th anniversary of the death of Süleyman the Magnificent. The exhibition will visit 10 cities, nine countries and three continents.

DS: With regard to the staff, how many people worked on this project?

Gürsu: We are a big team, including 12 female artists, volunteers from the İKASD, translators as well as section teams for production, design, logistics and field application stages. All members of the staff worked very hard, and the exhibition will travel to eight more cities. I want to express my thanks to President Recep Tayyip Erdoğan, the Foreign Affairs Ministry, the Culture and Tourism Ministry, the Turkish Cooperation and Coordination Agency (TİKA), the UNESCO National Committee of Turkey, the Turkey Turing and Automobile Institution, the Yunus Emre Institute, PTT A.Ş., Anadolu Agency, Turkuvaz Media, all Turkish embassies and official authorities in countries where the exhibition travels as well as the project staff members who worked hard to realize this historic project.

DS: As a final question, how will visitors benefit from the project and what are your objectives?

In each country the exhibition visits, a conference on Matrakçı Nasuh with the participation of researchers and historians as well as a concert featuring the best 16th century Turkish music by the General Directorate of Fine Art will be held. Visitors will be presented our special stamp, the documentary, the album, the project brochure in both English and Turkish and a new book on Matrakçı Nasuh. The aim of the İKASD is to properly transfer our culture, history and art to future generations. The institution believes that this project will be a permanent work and leave an intercontinental mark on international platforms.
RELATED TOPICS