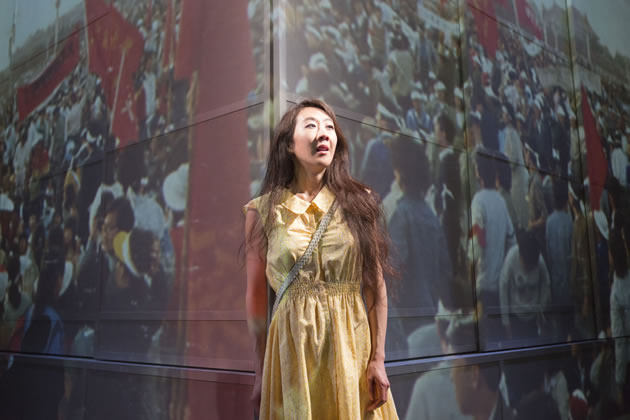 British dramatist Lucy Kirkwood's 2013 play ‘Chimerica,' focusing on the predominance of China and America in modern geopolitics, has garnered both local and international attention

"Chimerica" is a term first coined by Scottish historian Niall Ferguson to describe the increasing linkages and bilateral relationship between the world's two largest economies, China and the U.S. In describing Chimerica in 2007, Ferguson noted that it accounted "for around 13 percent of the world's land surface, a quarter of its population, about a third of its gross domestic product [GDP] and somewhere over half of the global economic growth of the past six years." It is also the name given to a new play from playwright Lucy Kirkwood, an effort that won her the 2014 Sir Laurence Olivier Award for the best play in the U.K. After a run as a smash hit in the U.K., the play made its U.S. debut at Studio Theater in Washington, D.C., last month.

The term "Chimerica" invokes the chimera - a monster of Greek mythology composed of three heads of different animals. The debt owed by the U.S. to China is equally monstrous. According to U.S. Treasury Department figures from August 2015, U.S. debt stood at $18.2 trillion. Of this figure, some $1.26 trillion is owed directly to China - or as a Chinese student blurts out to an American in one scene of the play, "We own you!"

The play examines the intricate relationship not through geopolitics but through the intertwined lives of equally complex Chinese and Americans living in Beijing and New York. The ambitious play features 45 characters spread across 38 scenes in a performance that lasts well over three hours. The performance jumps back and forth frequently between scenes set in 1989 and those set in 2012.

The story takes as its starting point during the occupation of Beijing's Tiananmen Square by protesters in 1989. The protesters demanded freedom of speech in China and other modest reforms. In response, the Chinese government sent in tanks and thousands were killed in the square. Several photographers captured the image of a lone Chinese man standing in front of a column of approaching tanks as the protests were crushed. To this day the man in the iconic photo, the aptly nicknamed "Tank Man," is unknown.

The play opens with a young press photographer, Joe Schofield, photographing the famous Tank Man just by chance. The play then fast forwards to 2012, with Schofield - played by Ron Menzel - now a seasoned war photographer who has covered conflicts in places ranging from Colombia to Gaza but has now returned to China. Back in Beijing, he meets Zheng Lin who he first met in 1989 and is now an English teacher for China's nouveau riche. It soon becomes clear that Lin, like the rest of China, is still dealing with the baggage of the Tiananmen Square protests.

Schofield, whose famed photograph now defines his career, tells Lin that he feels that Tank Man has become a more important icon of democracy than even Nelson Mandela. In response, Lin tells Schofield that Tank Man might be living discreetly in New York, a tip that leads Joe on a quest to find the unknown hero. Lin, through the course of the play, becomes increasingly involved in the fate of his 59-year-old neighbor who is dying of respiratory conditions brought on by Beijing's air pollution.

Predictably, Schofield's editor, Frank, is a conservative - who owns a desk given to him by former U.S. Secretary of State Henry Kissinger - and is even more predictably skeptical about searching for Tank Man. Instead, he orders Joe to focus on covering the Mitt Romney-Barack Obama presidential race. In his search, Joe is joined by Mel Stanwyck, a war reporter who ends up wearing an eye patch for his efforts - a detail Kirkwood added to pay homage to deceased war reporter Marie Colvin. Stanwyck is played by Lee Sellars and his portrayal of a journalist comes off as both colorful and far more convincing than Menzel's portrayal of Schofield.

In the course of their quest, Schofield develops a romantic interest in a British consultant named Tessa Kendrick. Kendrick has been sent to China to unlock the market for Western companies. In one scene, she speaks to the audience as if addressing a bunch of venture capitalists. Unlike Americans, Chinese consumers do not spend on credit. The Chinese she explains "have the money before they spend it." Another line in the play notes that economic growth in China has taken millions of people from "famine to slim fast in one generation."

In Kirkwood's play, both a sense of cultural supremacy and materialism can be found on both sides of the Pacific but little else. Indeed, the play is unflinching in its portrayal of China as a brutal communist dictatorship. In one scene, a Chinese interrogator tells his victim "[I'm here to] help you be happy," a line that seems straight out of a George Orwell novel. The play ends where it begins with Tank Man standing alone in front of that same column of Chinese-made T-59 tanks. While the U.S. debut under director David Muse was performed in front of packed houses, given the play's portrayal of China, a Beijing debut seems as mythical as the chimera.
RELATED TOPICS