Halil Akdeniz celebrates 50 years as a painter at Kibele gallery 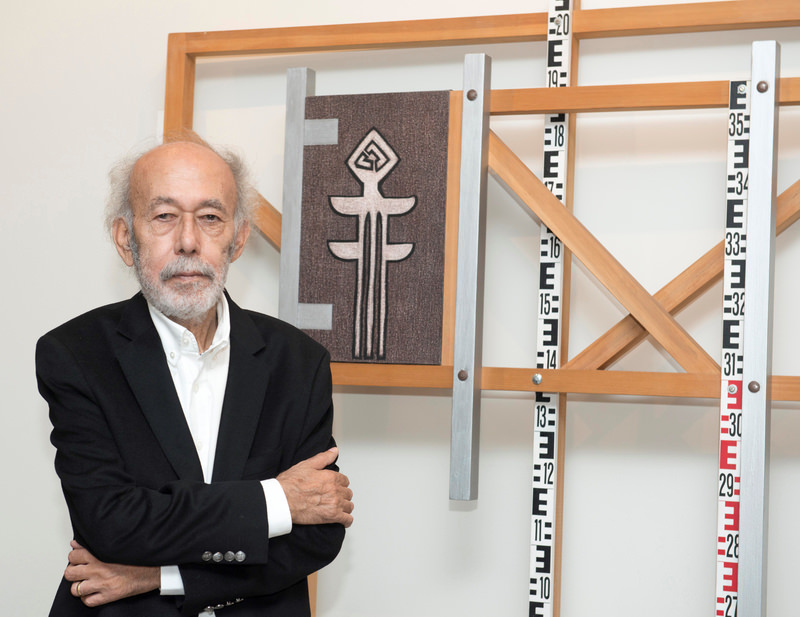 Contemporary Turkish painter Halil Akdeniz's retrospective selection, which he created throughout his 50-year career, is on display at İş Sanat's Kibele Art Gallery. The exhibition started the Gallery's art season and will run until Nov. 28

İş Sanat Kibele is hosting Halil Akdeniz, an important representative of contemporary Turkish painting, in the gallery's first exhibition of the 2015-2016 season. The retrospective exhibition, which is held in honor of the 50th anniversary of Akdeniz's art, takes the viewer on a journey through the painter's artistic life, starting in the 1960s.

Akdeniz believes that past and present feed into each other and that originality can only be achieved through locality. He developed universal messages by being nourished by the region he lives in and the culture that he is a part of, and he imparts these messages through his art.

The artist, who spent his childhood among archaeological remains in Antalya where Lycian tablets were discovered, said those years deeply affected his imaginary world. "The experiences that a person had when he or she was a child are usually determinative for the future. If the circumstances allow you to trace your future, things that seem independent or irreverent begin to coincide in one point of your life. Of course, these are the sources of my excitement and impulses that are buried deep into the roots of my art that I practice fondly."

Akdeniz considers painting as a permanent research field. He superposes an abstract-geometrical structure and an understanding of order with what is cultural, historical and contemporary; he creates an original, layered and transitive language by using the images and indicators he chooses. The artist brings innovation to the art of painting by using wood, iron plaques and other materials besides more classical painting tools such as paint and canvas.

Akdeniz's first retrospective exhibition introduces works from various periods of his artistic life. The exhibition will bring the artist's works on intercultural problems among Anatolian civilizations together for the first time as well. Akdeniz's retrospective also reveals the dominant artistic and cultural understanding of Turkey that has been shaped in the last 50 years. The exhibition, which reflects Akdeniz's 50-year-long painting career, is open at İş Sanat Kibele Gallery until Nov. 28. Aside from Akdeniz's unique works and art, he has founded fine arts departments and postgraduate and doctoral programs as well. He even made concessions to his artistic career to develop art education in schools. Akdeniz became an assistant professor in 1986, and he was promoted to associate professor a year after and became a full professor in 1994. He worked as a lecturer at the Ankara Gazi Education Institute, Gazi University's Faculty of Education, Ege University, Dokuz Eylül University, Bilkent University and Anadolu University. He founded painting and fine arts departments at Ege, Dokuz Eylül and Bilkent universities. He worked as the department head, member of faculty committees and board chairman at these universities as well.

From 1996 to 2001, Akdeniz acted as the Cultural Attache of the Consulate of Turkey in Bonn and the Embassy of Turkey in Berlin. From 2001 to 2005, he worked as a lecturer in Anadolu University's Faculty of Fine Arts. Akdeniz founded Turkey's first department of art studies and then founded a master's program concerning art theory and critique at Anadolu University and Işık University in 2003 as well as a doctoral program of art studies in 2003. From 2007 to 2013, Akdeniz was the head of a visual arts department and art studies at the Social Sciences Institute at Işık University's Faculty of Fine Arts. He still lectures at Işık University. Akdeniz is also known for his work and research articles on contemporary Turkish art. He has published four books and numerous articles on Turkish art. Akdeniz's work has been added to the collections of local and international museums, and he is also an honorary member of Germany's Münster Art Academy.
RELATED TOPICS