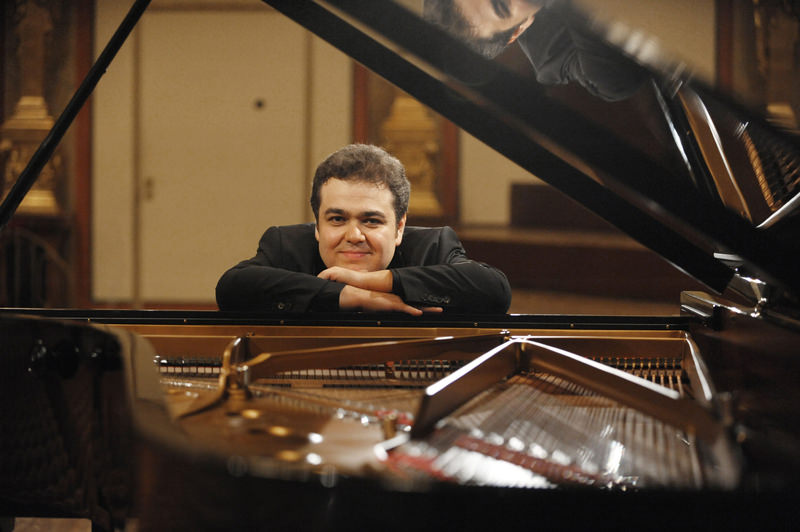 Arcadi Volodos will give a recital at the Presidential Symphony Orchestra Hall to kick off the Ankara Piano Festival.
by daily sabah Oct 23, 2015 12:00 am

Turkey's capital city Ankara will feature a rich artistic program this season starting with the Ankara Piano Festival on Oct. 28. Apart from the festival, opera and ballet performances will color the city in the upcoming days

Known as a "piano genius," famous pianist Arcadi Volodos will meet perform at the Ankara Piano Festival, which starts on Oct. 28. Organized by Altus Kültür-Sanat, the festival will begin with Volodos's recital at the Presidential Symphony Orchestra Hall. The festival aims to promote the harmonizing role of music and art through intercultural events to be held every month in Ankara. Including workshops and stage performances, the festival will continue until Jan. 19.

Serkan Kaya will be on the Jolly Joker stage today, while Levent Yüksek and Serkan Balcı will give concerts there respectively on Oct. 24 and Oct. 28. Under the baton of Fayçal Karoui, the Bilkent Symphony Orchestra will play "Deep Music: Beethoven and Schoenberg" with pianist Gökhan Aybulus today. As part of the Week of the U.N., the Presidential Symphony Orchestra will give a concert today under the conductorship of Ender Sakpınar.

As part of the "15th Italian Week in the World" undertaken by Italian President Sergio Mattarella, the "Turkish-Italian Bel Canto Night" will be on the Ankara Opera Stage on Oct. 24. The event is organized in collaboration with Turkey's Italian Embassy, the Istanbul Italian Cultural Center and the General Directorate of State Opera and Ballet. Directed by Haldun Özörten, the concert's first part will feature the Orchestra Nova Amadeus Quartet while the second part will feature the Ankara Opera Orchestra under the baton of Florian Frannek.Soprano Raffaella Battistini, mezzosoprano Sim Tokyürek, tenor Domenico Menini and baritone Eralp Kıyıcı will perform popular works by famous Italian composers. The children's musical "Kalp Korosu" (Heart Choir) will make its world premiere on Oct. 25 on the Leyla Gencer Stage. Choreographed by Ana Vita, modern dance show Cinderalla will be on the opera stage on Oct. 26. Musical comedy "Kanlı Nigar" (Bloody Nigar) will be on the Leyla Gencer Stage on Oct. 27. The two-act opera "Ali Baba & 40," under the baton of Selman Ada, will be performed on Oct. 28 on the opera stage.