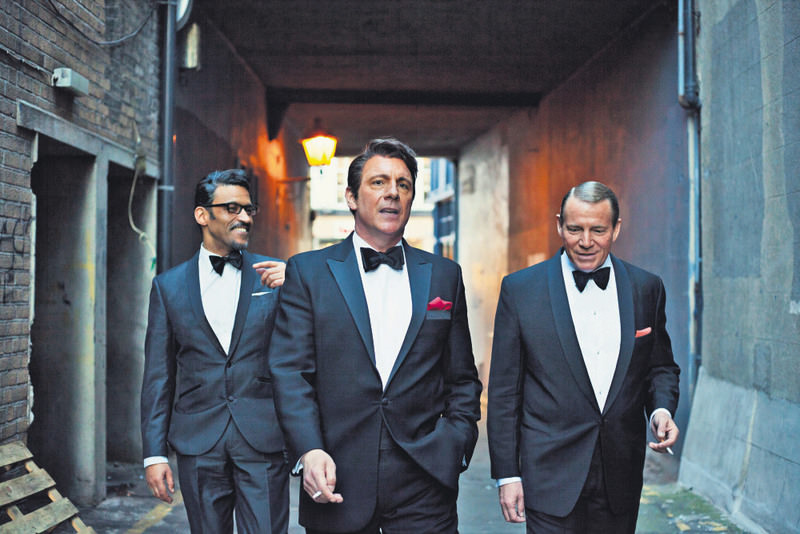 ‘Sinatra and Friends,' a tribute to the Rat Pack, is celebrating the 100th anniversary of Frank Sinatra's birth in Istanbul on Nov. 20-21

The "Sinatra and Friends" show pays tribute to the legendary stars of the Rat Pack with exceptional vocalists Tam Ward, George Daniel Long and Mark Adams, performing as Frank Sinatra, Sammy Davis Jr. and Dean Martin, respectively. Zorlu Performing Arts Center will host the musical on Nov. 20 and Nov. 21. The timeless songs of that ruled Las Vegas and Hollywood during the 1950s and '60s have remained popular with audiences of all ages for decades and continue to thrill and entertain today. In the show, Dean Martin is played by Mark Adams who is also co-founder of the show. Adams answered Daily Sabah's questions.

DAILY SABAH: This year on Dec. 12, Frank Sinatra would have celebrated his 100th birthday. What would you like to say about him? What makes him so special?

MARK ADAMS: He was the greatest popular singer. His diction, phrasing, storytelling was better than anyone else's.

DS: Are there going to be any surprises for the 100th birthday show in Istanbul?

ADAMS: We have a brand new show and there will be lots of surprises. You will have to come and see for yourself!

DS: You have been performing as Dean Martin for years. What would you like to say about him?

Yes, I have been performing Dean for 13 years. His performance changed as he got older. His successful long-running TV show arguably made him more famous in the mid-60s than Frank Sinatra. Plus he did something Frank never did, he knocked The Beatles off the top of the charts with "Everybody Loves Somebody Sometimes." Dean was not the drunk that people thought. He would go to bed early, watch a western and be up early to play golf.

DS: Can you tell us some facts that we don't know about Frank Sinatra?

Frank was the guy who liked to stay up late and party. Frank drank a lot of Jack Daniels and smoked two packs of Lucky Strike cigarettes each day. He also loved crosswords and model trains. He had a huge model railway in his Palm Springs Home.

DS: What is the most difficult thing about being a musical actor?

The most difficult part of being in this business, there isn't one! I am very lucky. I love traveling. We have performed all over the world. We come to Istanbul from Dubai and then we go to Germany to perform in a big TV show before going back to the U.K.

DS: You have been to Turkey for other performances. What would you like to say about Turkish audiences and the country?

I have been to Turkey a few times. I have performed in some outdoor festivals and also visited when I was performing my one-man show on the Queen Mary 2 and the Queen Victoria. I love Istanbul and the people are so lively and friendly. My cousin lives in Turkish Cyprus and I have been there many times. I love Turkish food and the last time I came to Turkey I had some beautiful Turkish wine.

DS: Do audiences react differently from country to country?

Audiences from different countries do react differently to the show. Scandinavians all go crazy at the end but watch quite studiously during. The Irish are usually very warm and often call out during the show, which is funny. Everybody knows the songs but they maybe do not expect so much laughter.

DS: You stay on the stage for long hours. How do you take care of yourself?: How do I take care of myself? Well I go to the gym a lot and I love swimming. In the summer I used to swim a mile every day in a large outdoor pool. I hope to have a swim in Istanbul, but probably not in the Bosporus.

DS: Can you describe your show? How is your show different from others?

I can tell you about our show but not too much, it would spoil the surprises. We feature songs including, "Come Fly With Me," "You Make Me Feel So Young," "That's Amore," "Mr. Bojangles," "My Way," "Volare," "What Kind of Fool am I," "Mack the Knife," "Side by Side" and many more. We have three beautiful girls called "The Goldiggers."

What makes our show the best? Well, we have all been successful as actors, singers, and dancers before we took on these roles so we knew what to bring and how to approach each character. We did not want to lampoon or make our representation a caricature. We can also change the show to suit different situations. When Sinatra and Dean Martin and Sammy Davis got together to perform their shows back in the sixties, seventies and eighties, they knew each other so well that magic would happen. We have performed together so often I would like to think we have reached that level of trust. We are all very excited and hope the Turkish audiences have as much fun as we have.

One of the most famous and sensational singers of the 20th century is Frank Sinatra, who also had an entertaining and interesting life. Here are some interesting facts about him:

- At birth he was thought to be stillborn until he was thrust under cold water and began to move.

- Forceps used during his birth caused permanent damage to his left earlobe, cheek and neck.

- In his teens, Sinatra worked for the Jersey Observer newspaper, often writing about school sporting events.

- Early in his career, Sinatra was asked to change his stage name to Frankie Satin but he refused.

- He was married four times. He was not a faithful husband, but he was a devoted father.

- At the age of 19, his son was kidnapped and released two days later after payment of a ransom.

- He refused to play in Las Vegas, Nevada and hotels and casinos where African-Americans were excluded.

- He won an Academy Award for his non-singing performance in "From Here to Eternity."

- He supported Ronald Reagan in the 1980 presidential election and donated $4 million to Reagan's campaign.

- Elton John said that Sinatra was simply the best and that no one else even comes close.

- Sinatra did not serve in the military during World War II because he was a neurotic and not acceptable mentally from a psychiatric standpoint.

- The song title "The Best is Yet To Come" is engraved on his tombstone. It was also the last song he sang in public, at the age of 79.
RELATED TOPICS