Fire of Anatolia stages the legend of Aspendos in ancient theater 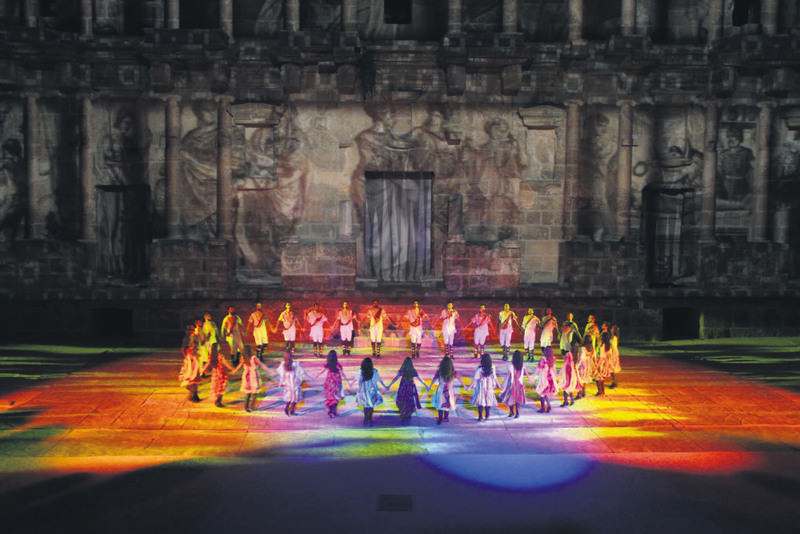 by Daily Sabah with AA Oct 26, 2015 12:00 am
Internationally renowned dance group "Anadolu Ateşi" (Fire of Anatolia) is celebrating its 15th year with a new project, "The Legend of Aspendos: A Journey to Aspendos," taking viewers back to the time of the Roman Empire. Making its premiere on Oct. 17 at the ancient Aspendos Theater, the two-act program brings theatrical dance and a documentary screening together. The documentary shows the history of the Aspendos Theater and its legends as well as the historical incidents that happened in and around the ancient city. Viewers can watch Fire of Anatolia's impressive dancers on stage while watching Alexander the Great in the war between the Persians and the people of Aspendos, the renovation of the theater by the Seljuks and Mustafa Kemal Atatürk's visit to the theater as well as scenes from shows performed on Aspendos' stage. The documentary also charts the stages of construction the theater has been through. The movie is being screened on the walls of Aspendos via the video-mapping method. Viewers take their seats after the film starts.

Greek architect Zenon, a native of the city, welcomes the audience to the show. Zenon and Kesos - the latter another Greek architect who designed the aqueduct of Aspendos - fall in love with Belkis, the daughter of the king of Aspendos. The dancers from Fire of Anatolia depict Zenon and Kesos's love for Belkis and the migration of Roman people from Troika to Aspendos. Period costumes and chariots add color to the show.

Speaking to Anadolu Agency prior to the debut show, General Art Director Mustafa Erdoğan said that they installed a special sound system to avoid damaging the ancient theater's cultural pattern. Fire of Anatolia has reached more than 40 million people in 4,000 live performances in 97 countries, including Qatar, Bulgaria, Japan, Egypt, the U.S., Russia and Portugal. Blending Turkish folkdance figures with modern dance and ballet from different regions, Fire of Anatolia is a unique project that depicts Anatolia's ancient myths, folklore and cultural history. In 1999, Erdoğan started working on the project intensively to make his life-long dream come true. The project, originally called "Sultans of the Dance," involved 90 dancers selected out of 750 candidates. The group made its first world tour in 2002. Fire of Anatolia now has 100 professional dancers given exclusive training on each project, such as "Gypsy Dance," "Semah," "Caucasian Dance" and "Troy." The next performance by Fires of Anatolia will be on Oct. 30 at the Aspendos Theater.
RELATED TOPICS