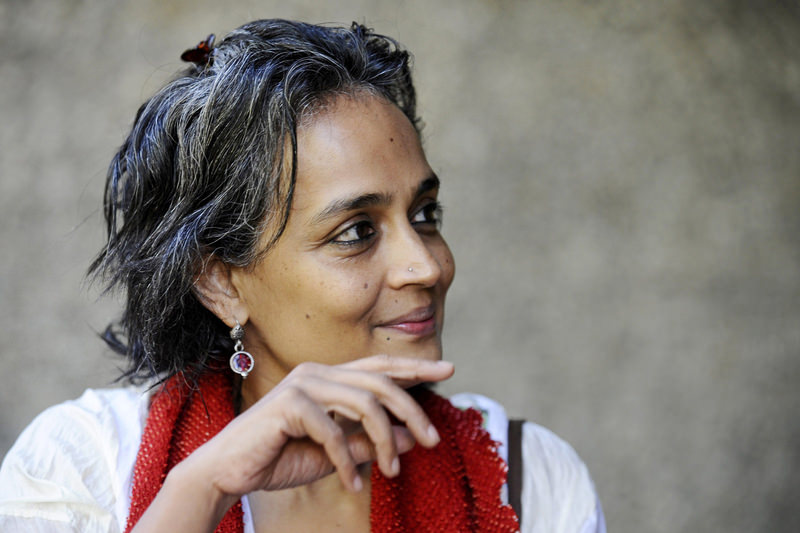 by Associated Press
Nov 06, 2015 12:00 am
Booker Prize-winning novelist Arundhati Roy and two dozen Bollywood award winners added their voices to the artists, scientists and historians who say they are alarmed by a climate of religious intolerance and violence in India.

Filmmaker Sanjay Kak, who was among Indian film industry figures returning National Film Awards in Mumbai on Thursday, said that those protesting "have deployed their visibility - and credibility - to articulate the growing anxiety of a vast number of Indians, those who may remain less visible but are no less perturbed at what is going on around them."

Roy, most famous for her 1997 novel "The God of Small Things," said in a sharply worded editorial in The Indian Express that millions of minority people including Muslims, Christians and members of low-caste or tribal communities "are being forced to live in terror, unsure of when and from where the assault will come."

Already dozens of writers have returned awards to the country's top literary institution, the Sahitya Academi, over disappointment that it has not condemned the killings of atheist activists who campaigned against religious superstition or Muslims rumored to have slaughtered cows or eaten cow meat. Among India's majority Hindu population, cows are considered to be sacred. Roy said she was "so ashamed of what is going on in this country" and was pleased to return her 1989 national screenplay award and "to be a part of the political movement."

"I believe what artists and intellectuals are doing right now is unprecedented, and does not have a historical parallel. It is politics by other means," said Roy, who in recent years has become a civil rights activist. Many of those protesting have also criticized Prime Minister Narendra Modi and his Hindu nationalist Bhartiya Janata Party for not speaking out against religious attacks, saying their silence has encouraged Hindu hard-liners to justify the attacks and assert Hindu superiority. Communal violence and prejudice are nothing new for India, born as a secular democracy in 1947 amid deadly Hindu-Muslim riots that killed an estimated 1 million people as Muslim-majority Pakistan was carved out of mostly Hindu India with the end of British rule. Since then, horrific riots and clashes have erupted at intervals, mostly between Hindus and Muslims.

Yet, India has largely been seen as overwhelmingly tolerant, with a cacophony of cultures that have lived side by side for centuries.

Some voiced concern with Modi's meteoric rise and landslide election victory last year, warning that his support was grounded in the party's Hindu base and noting that he had come up through the militant Hindu fundamentalist organization Rashtriya Swayamsevak Sangh, which translates as the National Volunteers Association.

Modi insisted during his election campaign that he would be prime minister for all of India and guaranteed protection for minorities. He has said little on the subject since taking office.

Modi's government has dismissed the growing protest as a political ploy to tear down the governing party.

"The entire purpose of these protests is to derail the development agenda of the Narendra Modi government," Urban Development Minister Venkaiah Naidu said Thursday. "The country is being subjected to damage and unnecessarily wrong information is being given about political intolerance." On Thursday, a separate group of writers, academics and artists came out in support of that stance and accused their protesting colleagues of political vengeance after Modi's BJP bested the Congress party in last year's elections. "A section of the nation's intelligentsia has expressed outrage at a perceived mounting intolerance in society," said a statement signed by 36 Modi supporters including the head of the Indian Council for Cultural Relations. "Failure in the elections is now sought to be avenged by other means."