Globe to Globe ‘Hamlet' in Istanbul 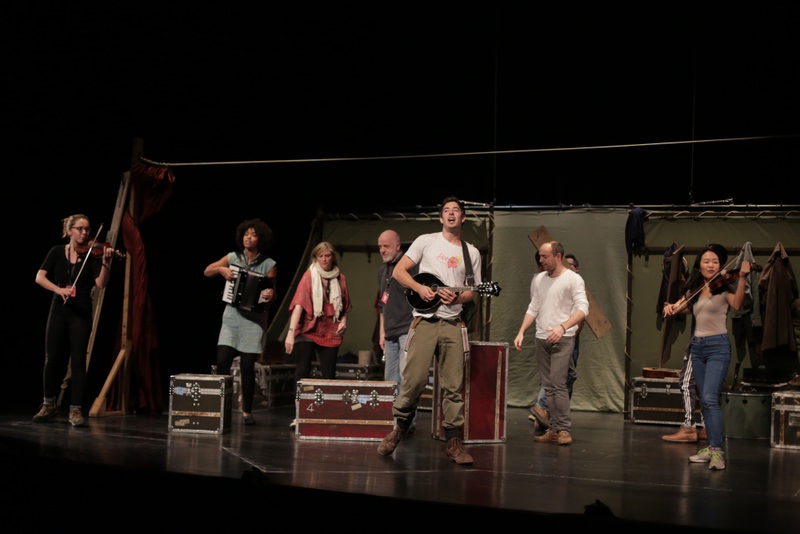 by Nagihan Haliloğlu
Nov 14, 2015 12:00 am
How many "Hamlet" productions are being performed at any given day, in theaters, community centers, high schools and amateur drama clubs around the globe one wonders. When I went to Zorlu Center last month to get my ticket for the Globe to Globe "Hamlet" production, the lady double checked to see I wasn't getting a ticket for the Tiger Lillies musical version. Right by the ticket stand there was a flyer advertising the performance of a Turkish adaptation of the Reduced Shakespeare Company. Soon after I bought my ticket, I heard the news that the Benedict Cumberbatch "Hamlet" was going to be screened at the İKSV Salon in Sirkeci. And that was of course sold out the day tickets went online, and I failed to get a ticket due to a cellphone malfunction. There are also two Shakespeare plays to be staged at Istanbul Municipality theaters this season.

The night I watched the Globe to Globe "Hamlet," the actor playing Claudius, Keith Bartlett, (and many other roles) informed the audience that Turkey was the 144th country they were performing in, in their round the globe tour that started back on April 23 (the Bard's birthday) 2014. Right before the performance began, Bartlett walked among the audience, and some people questioned him as to who was playing Hamlet that night. Clearly, there were people who had been closely following the troupe's progress. Bartlett informed us that there were three Hamlets and two Ophelias taking turns playing the roles. Also, acting as stage manager he told us that to approximate the open roof feel of the Globe Theater in London the light on the audience would be left on. It was, however, still a bit sad not to emerge on the South Embankment facing the Thames, but the Zincirlikuyu traffic when we left the theater.

As a traveling project the troupe travels light. There are eight actors, each playing more than one part, a fact that adds to the theatricality of the production, actors putting on an extra cloak to change from one character to another. The set is equally sparse: A few planks and trunks provide seats and castle ramparts; trunks, one could imagine, they use to put the musical instruments and costumes when they pack up for the next country. The costumes are not Elizabethan; there's something about the English country house, circa 1950s. The play opens and ends with a jig in keeping with Shakespearean tradition, and the folk songs played through the performance are very popular with the audience.

Hamlet, for the night, is portrayed by Ladi Emeruwa, and Ophelia by Amanda Wilkin, in the great British tradition of color-blind casting. Emeruwa's Hamlet soliloquies are a joy to watch and listen to, and there is a real sense of wonder in the "What piece of work is man..." speech. In fact, Emeruwa's performance made me rediscover the passage, which is what one goes to see Hamlet for - to reconnect with parts of the play that you have somehow forgotten or not paid much attention to in the first place. Wilkin is convincing as an Ophelia who goes from a sprightly young woman to a manic-depressive who speaks in English folks songs.

In any production of "Hamlet," one of the crucial decisions the director has to make is how much and which parts of it to cut. The Globe to Globe production is one of the longer ones I've watched, but no less exciting for it. One of the advantages of this long version is that we get the full text of Polonius's ramblings, expertly delivered by John Dougall. We get the extent of his advice to his son Laertes and daughter Ophelia, urging both to be very clever with the assets they have - the son with the money, the daughter with her charms. His three-piece suit, accent and delivery make him a very good representation of the English middle classes, carefully nudging his offspring in the right direction that will lead to social promotion. Middle class, middle England, dare we say, Mr. Middleton, telling his daughter not to be too liberal with the young prince before he actually makes a promise of marriage.

Another important production decision is what to do with the scene in which the traveling players come to Elsinore and act out the play that Hamlet writes to make his uncle and mother confess their crime. It is a long section that I personally love; through the players Shakespeare provides a full commentary on his own craft that pays his bills. Globe to Globe must have felt especially drawn to the scenes about these traveling players, as they themselves have been on the road for more than a year now. We watch Globe to Globe's fictitious counterparts rehearse their lines, try on costumes, clean their stage. One of them has a fez on for a prop, and it's probably a permanent part of the show rather than a nod to historical local headgear for the night. The players' scenes also reveal a strange tradition in the fictitious world of Denmark - that the play has a pantomime preview before the actors actually speak their lines. Productions usually do not know what to do with this pantomime section, but Globe to Globe makes it very panto and camp and quite enjoyable to watch. The real coup de theater, however, comes with the doubling that the small cast requires. The same actors play both the king and queen in the play written by Hamlet and then they put on "regal" cloaks to play Claudius and Gertrude. Yes, it's a Shakespeare thing. This doubling act is enabled by a red curtain on the stage, drawn by Hamlet to allow the actors to get in and out of character.

As the play moves toward its bloody end, the audience is soaked in Shakespearean language, and one recognizes, once again, all the film and book titles and phrases we owe to the play "Hamlet" alone. Dougall doubles as the gravedigger and puts on a Scottish accent, which renders the line about Hamlet's madness going unnoticed in England because all Englishmen are mad more cogent.

As a high school student, the importance of Fortinbras as a man of action in contrast to the dithering Hamlet was drilled into me, so it is a pleasure to see that the Fortinbras scenes, both on his way to invade Poland, and on his way back to muck out the bloody mess made by Hamlet and Claudius's equally murderous intentions, has not been cut by the director. After basically all the males of the Denmark dynasty are killed by one another, the Norwegian Fortinbras takes over the land. And after the last Shakespearean lines are spoken, he starts doing military steps that then gently turn into folk dance steps. A couple of the other actors start playing the fiddle and the concertina, and the scene of death and murder is cleansed, making the stage ready for the next constellation of shadows. With the music and dance, the few actors who have not died approach the ones lying on the floor and conjure them back to life. The audience knows that all is once again well with the world and give the troupe hearty applause.