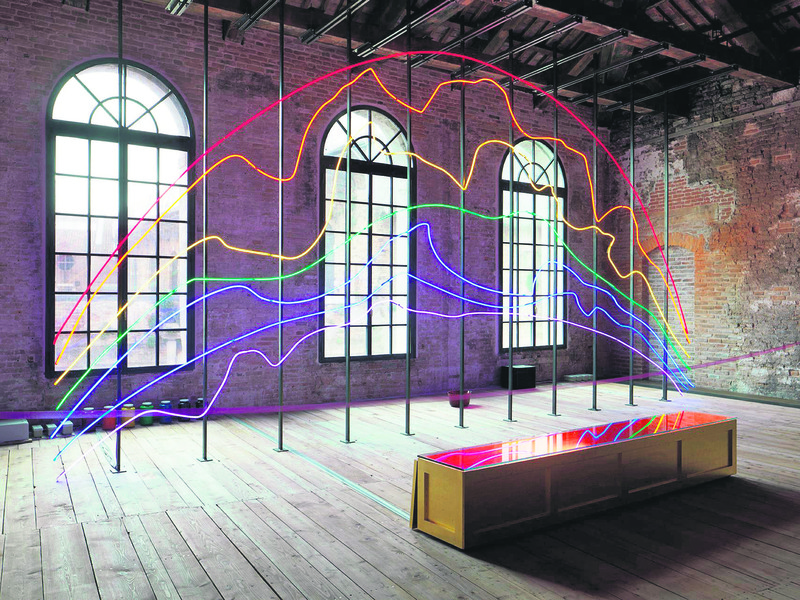 by Daily Sabah Dec 02, 2015 12:00 am
Regarded as one of the most important art events in the world, the 56th Venice Biennale closed its doors on Nov. 22 along with the Turkish Pavilion featured as a part of the International Art Exhibition. Curated by Defne Ayas and coordinated by the Istanbul Foundation for Culture and Arts (İKSV), the installation of Sarkis Zabunyan titled "Respiro" was this year's art display at Turkish Pavilion which was located at Sale d'Armi, one of the main stages of the biennial. It has been reported that over 500,000 art lovers visited Turkish Pavilion to see Sarkis's work throughout the biennial which features pavilions of 89 countries along with the main exhibition title "All the World's Futures" by curator Okwui Enwezor.

During the biennial, the Turkish Pavilion was featured over 400 articles both in Turkey and abroad. Prominent publications including, the Independent, Le Monde, Le Figaro, Frankfurter Allgemeine Zeitung, Süddeutsche Zeitung, La Repubblica, Frieze, Kunstbeeld, Art Review, The Art Newspaper, Art Presse, Canvas Magazine, Beaux-Arts, Connaissance des Arts and Art Review Asia published articles praising Turkish Pavillion and Sarkis's installation "Respiro." In order to create a continuous dialogue with "Respiro," various venues in France, the Netherlands, Switzerland and Istanbul sent "signals" to the Turkish Pavilion and they held simultaneous exhibitions in parallel with "Respiro." The first signal was the exhibition "Golden Icon" which was displayed at Hrant Dink Foundation in March.

On the occasion of the closing of "Respiro" and the Turkish Pavilion at the Venice Biennia, two video works by Ali Kazma will be screened at İKSV's Salon today at 07:00 p.m. The five minute long "Breath" which will be screened in Turkey for the first time is about Sarkis's exhibition "Respiro." On the other hand, Kazma's second video "Atelier Sarkis / L'atelier Sarkis" which was sent to Hrant Dink Foundation to be screened in parallel with the exhibition in Venice will be also screened at Salaon. The seven minute long video which was prepared following the exhibition of "Resistance" at Turkish Pavilion in Venice two years ago, Kazma films Sarkis's workshop in Paris where he has been producing art for over 50 years. The screenings at Salon will be overseen by Kazma and Sarkis.
RELATED TOPICS