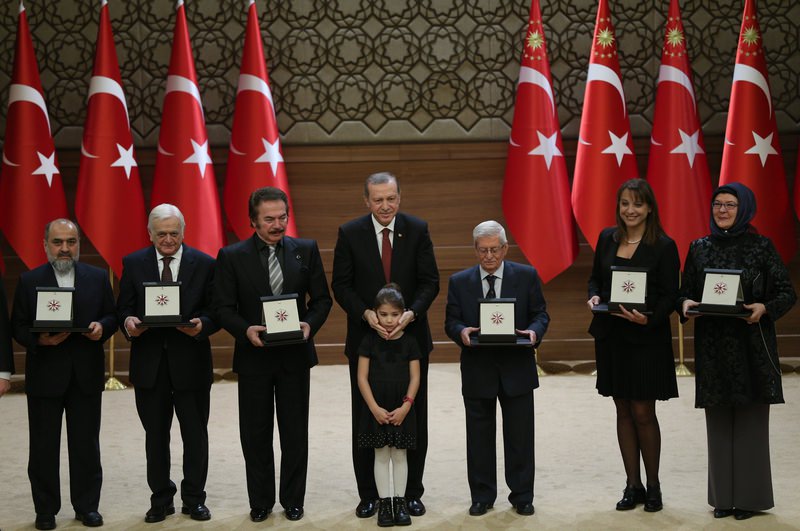 Influential artists and respected literary figures in Turkey were honored at the Annual Presidency Art and Culture Awards at the Presidential Palace on Wednesday. The awards were presented to the winners by President Recep Tayyip Erdoğan

The Annual Presidency Art and Culture Awards were presented during a ceremony held at the Presidential Palace in Ankara on Wednesday. This year's awardees included Münir Özkul in the cinema category, Orhan Gencebay in the music category, Rasim Özdenören in the literature category, Mehmet Genç in the history category, Hüseyin Kutlu in the traditional arts category and the late writer and thinker Cemil Meriç in the posthumous category, representing a certain genre in contemporary Turkish arts and culture.

Münir Özkul, an influential actor in theater and cinema, has played in several films known by every Turkish citizen who grew up in the 1950s with the characters he has animated. Having received numerous awards such as the Golden Orange Award at the International Antalya Film Festival and the İsmail Dümbüllü Theater Award, Özkul was nominated for the Presidency Culture and Arts Award this year. Due to the veteran actor's illness, his daughter Güner Özkul accepted the award on behalf of her father.

Rasim Özdenören was presented the literature award at this year's Presidency Art and Culture Awards. Known for his simple technique of writing, Özdenören displays a profound narrative ability to deliver complex matters in clear and fluent prose. As a Muslim writer, he manages to reach out to readers from every circle through his appealing narrative tone. He is also one of seven prominent modern Turkish writers, including Nuri Pakdil, Cahit Zarifoğlu, Erdem Bayazıt, Mehmet Akif İnan, Ali Kutlay and Alaeddin Özdenören. Upon receiving his award, the writer gave a short speech about his literary journey. "I think I am being given this award not for a specific work of mine, but for all of my literary output," he said. "I have always expressed my feelings in my writing through the local language of Kahramanmaraş, where I was born and raised. Of course, I was influenced by my time in other cities I moved to with my family. Kahramanmaraş is a reputable place in terms of authors and poets coming from the local culture. I began writing in Kahramanmaraş while observing my environment in the city. I have always tried to convey with words my stance on the ideals and values that we have lost as an Islamic society under Western influence. I especially thank my contemporaries and brothers with whom I had the chance to interact through my literature," Özdenören said.

One of the kings of Turkish music, Orhan Gencebay, received the music award at the ceremony. Gencebay is an influential musician who holds a special place in the hearts of many, stretching across generations with his songs from traditional folk music to pop and rock. For many years, his music was banned from public television and radio. Now, Turkey has overcome the debate about the value of "arabesque" and embraced Gencebay's unique style. In his acceptance speech, he said: "I spent most of my life with Turkish music. My aim has been to preserve and promote our values. We have a very rich cultural as well as historical richness from the past which we should strive to unearth. We have several legendary musicians who made great contributions to universal music. I personally ask everyone to take interest in our culture and arts. I will also search for new ways to promote our rich culture as best I can," Gencebay said.

Historian Mehmet Genç, a prominent academic in Ottoman studies, has produced interdisciplinary works about the Ottoman economy in relation to 20th century economics in the world. Genç explained the last two centuries in terms of economics and always wrote on the basis of original sources without Western biases. Genç expressed his pride in receiving the award for his Ottoman studies during his acceptance speech. "In Islamic history, the most long-lasting state was the Ottoman Empire. In world history, it has a special place in terms of ethnic, cultural and religious diversity. Though the Ottoman Empire has crumbled, we have to recall its economic and political systems to define our contemporary world. Thanks to the vast Ottoman archives, we can find sources for possible solutions to the handling of economic and political problems in the multicultural societies of Islamic countries."

Hüseyin Kutlu received an award for traditional arts. Kutlu is regarded as the most prominent calligrapher in Turkey and all over the world. In addition to preserving the traditional style, he also produced some extraordinary examples of calligraphy. Kutlu has spent his life advocating for the revival of traditional Islamic-Ottoman arts, and has unearthed the spiritual aspects of these arts in the struggle of modern life. "As a symbol of respect for the traditional arts, I proudly receive the award in the name of the late artists who contributed to calligraphy. I want to name my master, Hamit Aytaç, and other Ottoman calligraphers. Formerly, calligraphy artists would work under tough economic and physical conditions. Now, thank God, calligraphers are supported by the government. Today, calligraphy is enlivened through the personal efforts of artists and interested students. However, this art should be widely applied in universities and academies. We should preserve our unique culture and arts," he said.

Lastly, the late thinker and author Cemil Meriç was given the posthumous award. Meriç wrote numerous books that influenced many generations and opened new horizons in the quest to find original identity in the modern world. He lived in Hatay, which was under French rule at the time, compelling him to contemplate unique Turkish values. After he moved to Istanbul, he worked as a French teacher. Following his retirement, he focused on writing on intellectual matters. Even after he went blind, he continued writing. Ironically, the assistance he received after becoming blind allowed him to produce more of his works. His greatest assistant and daughter, Ümit Meriç, received the award in the name of her father. Ümit Meriç described his literary and philosophical journey, which she witnessed firsthand. She also thanked President Recep Tayyip Erdoğan for his candid efforts to revive Cemil Meriç's memory, naming Erdoğan the "Salah-al-Din Eyyubi of the Modern Times."

Erdoğan delivered the awards and spoke at the awards ceremony. He stressed that the awards were not given as a result of a competition, but rather as symbols of the people's gratefulness for the preservation of Turkey's cultural and historical values. "Anatolia has been a cradle of civilizations for thousands of years, paving the way for cultural interaction between multiple societies. Neither Anatolia nor the Turkish people have ever given up hope. As a world-renowned thinker and poet, Yunus Emre expressed: 'We are always born out of ashes.' Despite all the attacks we encounter, our people still stand and continue to be a source of hope for our friends. We always succeed in preserving our nature; however, that is not enough. We will enhance our cultural presence in both the national and international arena. Neither political nor economic crises can destroy us as long as we are fed by the determination to protect our culture and history."
RELATED TOPICS