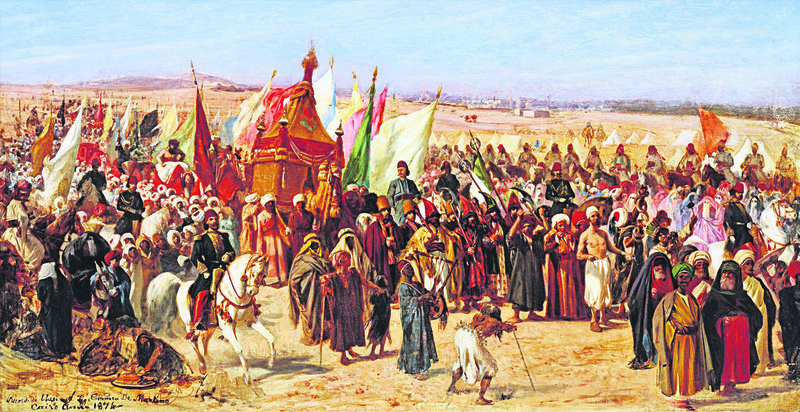 by Anadolu Agency Dec 10, 2015 12:00 am
The Valuable Paintings and Ottoman Artifacts auction at Antik A.Ş., the first professional auctioneer in Turkey, broke records this week with painting going for nearly a TL 1 million ($350,000). During the auction, several Ottoman era paintings and artifacts were auctioned with Stefano Ussi's oil painting "Surre Regiment" being sold for TL 920,000. Speaking to Anadolu Agency, Auction Director and Founder of Antik A.Ş. Turgay Artam said their main target is to unearth the priceless artworks forgotten deep in people's attics. The latest auction brought the works of important artists and masters in Turkish art history, including Süleyman Seyit Bey, Nazmi Ziya, İbrahim Çallı, Naci Kalmukoğlu and Hoca Ali Rıza Sami Yetik, together. According to Artam, these kinds of auctions are a great opportunity for collectors in Turkey. "As the years go by, it becomes harder and harder to find valuable art works. New collectors open museums to display their art collection in order for people to enjoy art," Artam added.

The painting "Surre Regiment" was commissioned by the then Khedivate of Egypt İsmail Pasha who met Florentine artist Ussi during the opening ceremony of The Suez Canal. The artwork portrays the pilgrims who set off from Istanbul for Mecca and the horsemen who were protecting them. Ussi finished the worked in 1873 and intended to send it to Cairo. However, Ottoman Sultan Abdülaziz ordered the authorities to bring the painting to Dolmabahçe Palace.

The Surre Regiment was a convoy whose aim it was to take gifts from Istanbul to Mecca during the Ottoman era from 1517 to 1864. The regiment started its journey following a ceremony held in Istanbul and set off after boxes full of gifts were loaded on the camels in the presence of the sultan. The regiment was composed of pilgrims, an official usher, tailor, messenger, assistants, camels, camel lessors and infantry. On the road to Makkah, the Surre Regiment handed the gifts and aid to those who were in need and completed its mission when it arrived at the holy city and the pilgrimage was completed. The tradition of the Surre Regiment continued until the last years of the Ottoman Empire.
RELATED TOPICS