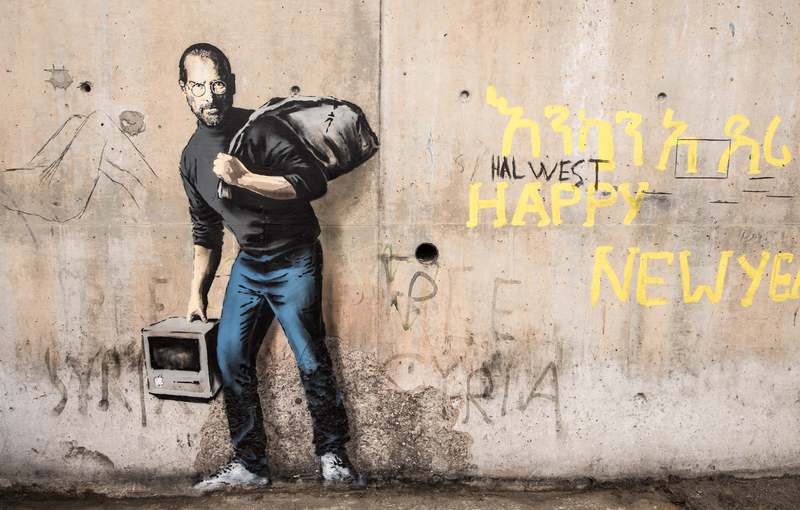 by Dec 12, 2015 12:00 am
Renowned street artist Banksy has created a trio of oeuvres to publicize the plight of migrants at the infamous "Jungle" camp in Calais, northern France, including one depicting Steve Jobs.

One work painted at the camp shows Jobs, whose biological father was a Syrian immigrant to the United States, holding an early Apple computer terminal and a bin liner of personal possessions.

Some 4,500 people were crammed into the camp, to which Banksy recently made a donation and where he painted his latest works near a clutch of tents housing them.

Few of the migrants, mostly from war-torn Syria, knew who Banksy or Jobs were but the artist explained he had depicted the latter in his trademark black polo to underline the late computing king's connection with the country.

"We're often led to believe that migration is a drain on the country's resources but Steve Jobs was the son of a Syrian migrant," said Banksy in a rare public statement.

"Apple is the world's most profitable company – it pays over $7 billion (£4.6bn) a year in taxes – and it only exists because they allowed in a young man from Homs into the U.S.," added Banksy, who painted two other works in downtown Calais, including his own take on French painter Gericault's "Raft of the Medusa."

Instead of the Argus vessel which picked up a handful of survivors of the Medusa after their frigate was shipwrecked in 1816, Banksy's version shows a car-ferry representing those which make the daily cross over the English Channel and which remain inaccessible to would-be migrants who seek a new life in Britain.

On Banksy's website, the caption under Steve Jobs's image reads "the son of a migrant from Syria."

Under the Gericault pastiche is the slogan, "we're not all in the same boat."

The third painting depicts a Calais beach, which Banksy also published Saturday on his website, showing a child with windswept hair anda suitcase at his feet, longingly peering at the distant British coast through a telescope on which a vulture is perched, looking at him.

On Saturday afternoon, the artwork was largely covered up with a plank of wood – a temporary measure designed to "protect the artist's works" according to Calais city hall.

One Banksy work can often fetch hundreds of millions of euros from ardent collectors.