‘Cuisine and Confessions' in Istanbul until Sunday 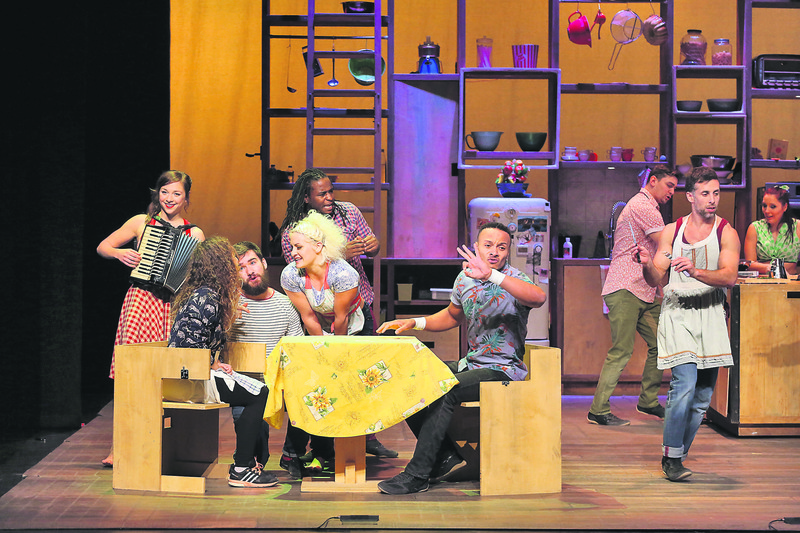 One of Istanbul's most anticipated performances this year, ‘Cuisine and Confession' features coreography and circus performances by the Canadian group Les 7 Doigts de la Main (7 Fingers) on stage at Zorlu Performing Arts Center until Dec. 27

The Istanbul Foundation for Culture and Arts (İKSV) is hosting the Canadian troupe Les 7 Doigts de la Main (7 Fingers) with their project "Cuisine and Confessions" until Dec. 27 in Istanbul. The stage performance, which presents a unique harmony of circus, dance, theater, music and food, was introduced to the press during their rehearsal at the Zorlu Performing Arts Center. Speaking at a press conference following the rehearsal, İKSV Istanbul Theater Festival Director Leman Yılmaz said they watched several performances of Les 7 Doigts de la Main at different venues and loved their show. "The troupe is well-known with their performances around the world. I believe that the success of their performance is based on the troupe's genius in adapting their show according to the venue and stage they perform on. This is something that only a few troupes can achieve," Yılmaz told the press.

Speaking on behalf of the sponsor İntema, Emre Eczacıbaşı expressed his excitement about the show, and said: "We are happy to host Canadian Les 7 Doigts de la Main and their performance 'Cuisine and Confessions' in Turkey. I hope the audience in Turkey will enjoy the show."

Anna Kichtchenko, one of the dancers of the Canadian troupe, stressed that they are happy to be in Turkey, and continued: "Our troupe is visiting Turkey for the first time; so, we can say that it is a fresh start for all of us. Matias Paul, another dancer, said they pick up something and adapt it to their show in every country they visit. "The performance is based on a circus show in a kitchen, but the stories that we share about food on stage are actually inspired by our lives. Everyone can find something to relate to themselves in our show. We both cook and perform acrobatic moves on stage. In order to tell the stories we want, we use all our dancing, drama and acrobatic talents," Paul said.

"Cuisine and Confessions" presents an energetic and rich feast to the audience for 90 minutes as the performance explores senses such as taste and smell, blending childhood memories, relationships and family traditions with the troupe's artistic vision in a large, fully equipped, ready-to-use communal kitchen. "Cuisine and Confessions," which is performed by nine acrobats/dancers, attracts attention with its acrobatic choreographies, and presents thrilling acrobatic moves that reflect the troupe's members' dreams, experiences, roots and life stories, accompanied by unique musical compositions. "Cuisine and Confessions" will be performed at the Zorlu Performing Arts Center until Dec. 27.
RELATED TOPICS