‘Surrender of Jerusalem' painting by Saig exhibited in Amman 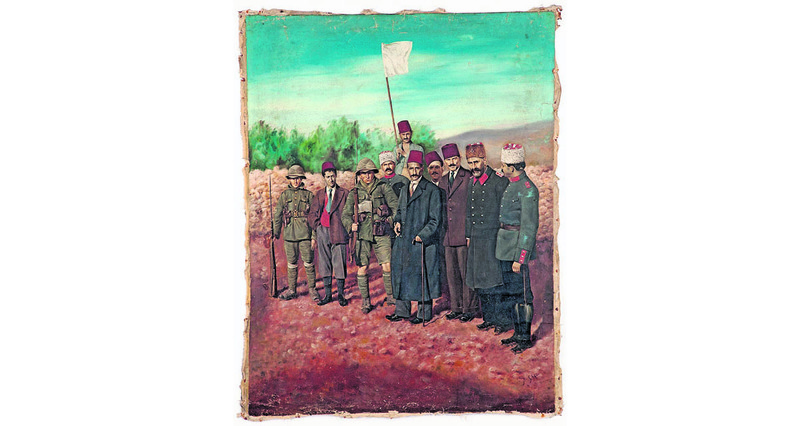 The Darat al Funun Arts Center in Jordan's capital city of Amman now host an important example of Palestinian art: Nicola Saig's portrait depicting the ‘Surrender of Jerusalem' in 1917 after World War I

Located on the Cebel Vebdeh Hill in Jordan's Allwabdeh Moun region, the Darat al Funun Art Center showcases the distinguished art of Jordan and the Middle East. The art center, which is composed of three buildings, helps Palestinian and Syrian artists who cannot fully realize their art in their hometowns to create and display their works. The art center also features dozens of rooms that offer a different perspective on the region through the eyes of various artists. Darat al Funun Art Center Deputy Manager Muhammed Shaqdih, who is also a contemporary painter, shared insights about the art center to Anadolu Agency (AA).

The art center was founded by Abdulhamid Shoman in memory of his late father Halid Shoman who was a banker and an artist. It was named "Darat al Funun," which is Arabic for "art and art house for artists." The building, also home to the library of the center, was built by the British to govern Jordan between 1918 and 1920. Following the British, the building was used by Arab governors. The structure, which was used as a house until 1956, became the prime ministry building for Jordan's first government when the British handed over the building to the Arabs. When the Arabs took the command of the army, the very first Jordanian government met in the building. The building was used for various purposes over the years, was later bought by Abdulhamid Shoman in 1992 and restored by well-known Jordanian artist Ammar Khammash. Currently, the art center operates under the umbrella of the Halid Shoman Foundation. The art center was established and managed by Abdulhamid Shoman for many years. Upon his death in 2002, his wife Suha Shoman took over the management of the art center. "The Shomans were people who were very interested in art," Shaqdih said. "Both Abdulhamid Shoman and Suha Shoman are painters. They turned this building into art center as they came from artistic families."

The Darat al Funun Art Center was primarily founded to support artists and writers in Damascus; however, the center is now home to the artworks of various artists from different parts of the world. The art center, which has permanent as well as temporary collections, welcomes all art lovers, and the entrance is free of charge.

The structure called the "Blue House" that is located in the middle of the art center's complex offers insights about the architectural traces of the Ottoman Empire in the region. The building was originally built as a resident for Acre Governor İsmail Hakkı Pasha while Palestine territory was still under the rule of the Ottoman Empire. The artist Ammar Khammas exerted great effort to restore the balconies in blue to represent the Circassians during the restoration in 1993. Due to the balconies and their color, the house is called "Blue House" by the Jordanians.When you walk into the Blue House, numerous books welcome you on the shelves in the hallway. These books are said to be the most important works of Arab writers and philosophers of the early 20th century. In the rooms of the Blue House, the walls are decorated with the works of Palestinian painter Adnan Yahya, which describes the Sabra and Shatila massacres by the Israelis and right-wing Lebanese Christian Phalange militia during the Lebanese Civil War. The house is also home to the works of famous Jordanian artist Mona Saudi and the well-known poet of Palestinian resistance, Mahmud Darwish. Ahead of the Blue House, a bronze statue whose face is directed toward visitors while its back faces Jordan stands out. Made by well-known Iraqi sculptor Ismail Fatah al-Turk, who was also the sculptor of the martyr's memorial built in 1983 in Iraq to commemorate the dead Iraqi soldiers of the Iran-Iraq War.

This art center, which commands Amman from the hilltop, also presents the picture of a common sadness that Turkey and the Middle East share. The 1917 painting by Nicola Saig of Jerusalem describes the "Ottomans handing over Palestine territory to the British." The oil painting on canvas was inspired by a black and white photograph taken while then-Jerusalem Municipality Mayor Hüseyin Efendi surrendered Jerusalem to the British Royal Army Forces on Dec. 9, 1917. Studying the painting, Shaqdih said: "This artwork describes the Ottomans delivering the keys of the city to the British army. Saig is a very important Palestinian artist who lived between 1863 and 1942. He owned a shop where he sold his artwork while he was living in Jerusalem. He used to sell his artwork as souvenirs to Muslim and Christian tourists; however, his work became famous over time." The most known work of Saig is his "Surrender of Jerusalem," which he finished in 1917. According to Shaqdih, the painting is the most important work of the artist. It is also known that the painting is very valuable for Palestine as it refers to the history of Jerusalem and Palestine. "'Surrender of Jerusalem' is a masterpiece that decorates the cover of the book 'Arab Art History,' which was published by the Halid Shoman Collection," he added. Shaqdih said the painting draws great interest from the visitors of the art center, and stressed that there are artists who come to Jordan just to take a look at the painting that Saig created 99 years ago.

Darat al Funun is an art center that everyone should see when they are passing through Jordan. Among the historical stone buildings spreading through Amman's hills, the center brings past, present and future together under the same roof. The center waits for its visitors who desire to study the art and culture to the countries they are in.
RELATED TOPICS