Epic of Köroğlu revived on stage in new opera production 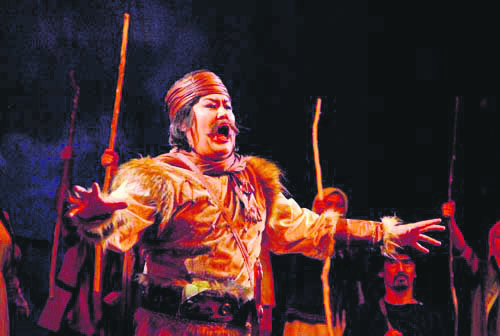 by Anadolu Agency Jan 11, 2016 12:00 am
Inspired by the Epic of Köroğlu, known throughout Anatolia, the Caucasus and Central Asia, and composed by well-known Azerbaijani composer Uzeyir Hajibeyov, "Köroğlu Opera" premiered in Mersin on Jan. 9. The opera was produced through the collaboration of the Culture and Tourism Ministry, State Opera and Ballet General Directorate, International Organization of Turkic Culture (TÜRKSOY), Azerbaijan Ministry of Culture, Embassy of Azerbaijan in Ankara and Mersin State Opera and Ballet (MDOB).

Speaking at a press conference, TÜRKSOY Secretary-General Düsen Kaseniov expressed his excitement to stage this immortal opera with a new production in Mersin. He said the opera will be performed by the Mersin State Opera and Ballet, and added: "'Köroğlu Opera' was staged in Bishkek, Ankara and Baku in 2009 as well as in Istanbul in 2010 as part of the first International Opera Festival. Hajibeyov's five-act opera helped revive the common hero of the Turkic world, Köroğlu, and introduced Turkic culture in the international arena."

MDOB manager and chief art director, Erdoğan Şanal, said the General Directorate of State Opera and Ballet emphasizes staging productions that are inspired by Turkic culture and Turkic lifestyles. "In light of their motto, the general directorate and TÜRKSOY produced a fantastic collaboration," he added.

Hajibeyov's "Köroğlu Opera" will also be staged on Jan. 12 and Jan. 16 for art lovers in Mersin.
RELATED TOPICS