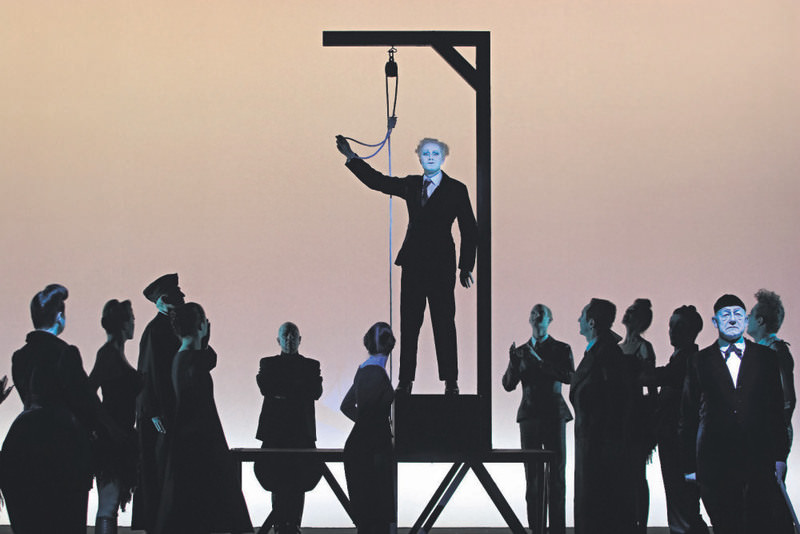 Bertolt Brecht's memorable ‘The Threepenny Opera' is now in Istanbul, with the Berliner Ensemble Production directed with the input of legendary director Robert Wilson

The Istanbul Culture and Art Foundation (IKSV) with the sponsorship of the ENKA Foundation is preparing to stage one of Europe's most important theater companies, the Berliner Ensemble's production of Bertolt Brecht's "The Threepenny Opera," directed by Robert Wilson. Tickets have sold out in all the countries where it has been staged and "The Threepenny Opera" will now be at the main stage of the Zorlu Performance Arts Center on Friday May 13 and Saturday May 14. Tickets for the show will be available on Thursday Jan. 21 at Biletix sales channels or from IKSV. The 20th century's most important German poet, playwright, theater director and the founder of the Berliner Ensemble and Epic Theatre, Bertolt Brecht, adapted British writer John Gay's 1728 play "The Beggar's Opera" to the 20th century with "The Threepenny Opera," which has been kept up to date and is a musical theater show that combines theater and design in a surprising way. Brecht's "The Threepenny Opera" has an important place in theater history, as it not only illuminates the past by telling the adventures of an antihero, but also talks about concrete realities of today's world and helps us interpret today from a different perspective. The show examines ethical values and depicts the horrors of war without compromising the rich musical and humorous format.

"The Threepenny Opera," forming its own aesthetic on stage and bringing different worlds to the audience, directed by Robert Wilson, will be performed by the most important theater community in German theater, the Berliner Ensemble. Just like all of Wilson's works, this play will consist of dance, movement, light, text and design that are interrogated into each other. The music provided by a live orchestra throughout the play is by German composer Kurt Weil and has become a part of the plays popular culture.

American director and genius theater critic Robert Wilson, besides theater and opera, has also made a name for himself in interdisciplinary projects around the world. Regarded as a stage magician, Wilson has presented theater enthusiasts with striking plays in many theaters and operas such as the Bastille Opera, the Odeon Theater, BAM, Lincoln Center, the Berliner Ensemble, Athens, and Avignon festivals, as well as the Istanbul Theater Festival. Wilson has worked with many artists such as Giorgio Armani, Lady Gaga, Tom Waits, Lou Reed, William Dafoe, Mikhail Baryshnikov, Arvo Part and Philip Glass. The New York Times describes Wilson as "a giant of the contemporary theater scene." Including the Olivier Award, Wilson has been awarded numerous awards worldwide. Wilson was also presented an Honorary Award at the Istanbul Theatre Festival in 1998.

The Berliner Ensemble A giant theater school Founded in 1949 by playwright Bertolt Brecht, and without a doubt today's most powerful representative of contemporary German theater, the Berliner Ensemble includes not only Brecht's work in its repertoire, but also Shakespeare, Schiller and Buchner. Some of the world-renowned directors that have worked with the Berliner Ensemble are Heiner Muller, Peter Stein, Luc Bondy, Claus Peymann and Robert Wilson.
RELATED TOPICS