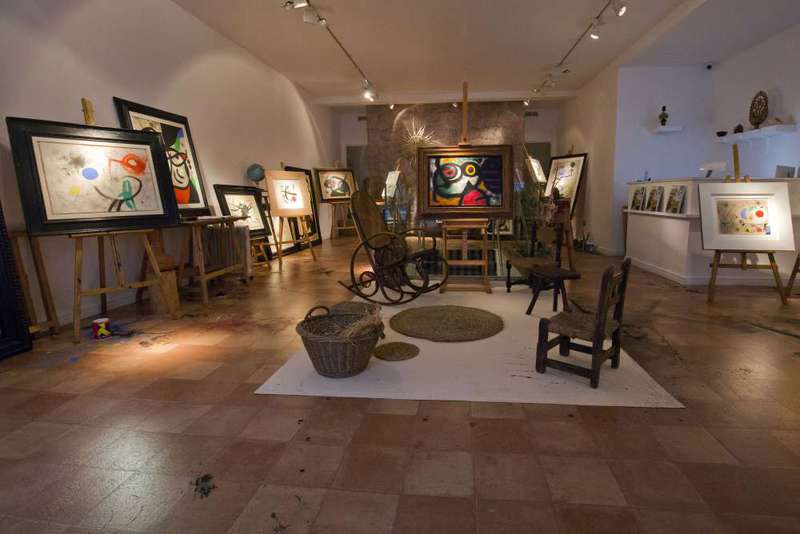 by French Press Agency - AFP Jan 20, 2016 12:00 am
Although not bathed in Majorca's light, a London studio has recreated in minute detail the Mediterranean sunshine island studio of Spanish painter Joan Miro. Barcelona gallery Mayoral has reproduced the furniture, household items and painting materials found in the studio that inspired the surrealist painter.

"The studio offered Miro a suitable working environment," said Joan Punyet Miro, the artist's grandson who collaborated on the project. "When he closed the door behind him, he knew he was cutting all contact with the outside world and entering into his imaginary universe," he added.

"This imaginary space... was arranged upon a background of Mediterranean light, colors and shapes." The recreated studio, which marks the original's 60th anniversary, contains 25 paintings and drawings by the artist, who was born in Barcelona in 1893 and died in Majorca in 1983. Elvira Camara, curator of the "Miro's Studio" project, said it would bring to a London audience the "artist's final creative stage, which saw the culmination of his brilliant human and artistic process."

The studio was opened in 1956 on the Balearic Island where the artist had taken his family during World War II, saying it had been "my dream, once I am able to settle down somewhere, to have a very large studio." The studio was designed by the artist's close friend Josep Lluis Sert, a renowned Catalan architect. The pair were forced to work together via letter as Sert was exiled in the United States, and their notes are also on display in the studio exhibit. The studio will be open to the public from Jan. 21 until Feb. 12, before travelling to New York (March 3-8). The original studio is in the Majorcan capital Palma, and is now part of a complex featuring a museum, library and sculpture garden.
RELATED TOPICS