From Aleppo to north Germany: A Syrian artist's journey 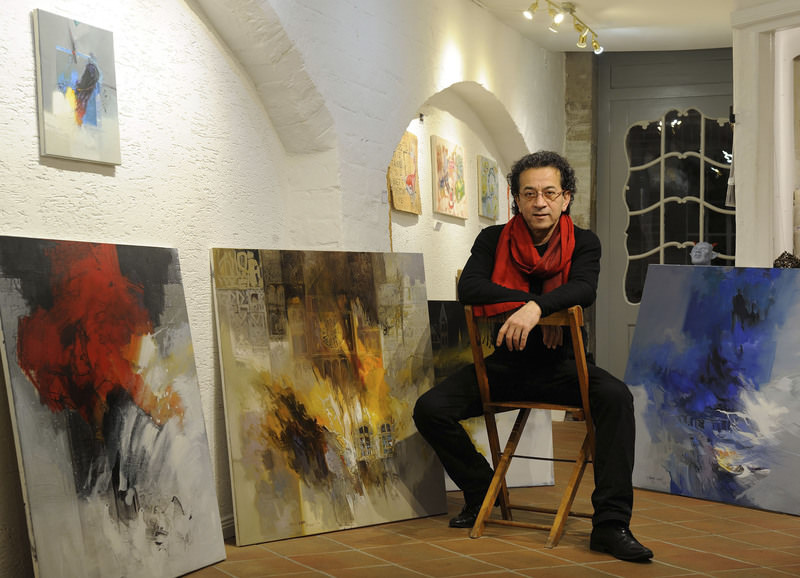 by Feb 04, 2016 12:00 am
The boats resemble tiny nutshells as they drift toward towering waves, at risk of capsizing at any second. The scenery in the painting is only hinted at behind great storms of blue and yellow that heightens the feeling of abandonment and helplessness. The image is one of the Greek coast as painted by Syrian artist Naser Agha who found his new home in the northern German port city of Bremen a few months ago. On Thursday, he opens his first exhibition in Germany, a return to normality after years of civil war, fear and destruction.

Agha is displaying 25 paintings at Bremen's ART15 artists' residence. A few of them he managed to salvage from Syria, while he painted others after he fled to Turkey and later Bremen. Another painting shows two boats stranded on the shore as threatening clouds boil up in the background. But the artist refuses to say if the scenes come directly from his own escape from Syria. "It is an attempt to capture a moment of fear," is all the 54-year-old will say on the matter.

Many things are merely hinted at in his work. Often there are architectural elements, oriental ornamentation from his Syrian hometown of Aleppo or the Gothic arches of Bremen's cathedral from which intense patches of color explode, encircling them or superimposing themselves upon them.

Since October, Agha has been living in a small room in a hostel for refugees in Bremen as he waits for his residence permit. "Bremen has allowed me to paint again," he said. He got to know the artists in residence at ART15 through an art campaign aimed at refugees. They made a place for him in their studio and gave him canvas and paint. "I have my friends to thank for the freedom to be able to devote myself completely again to my painting," Agha says in Arabic through a female interpreter.

Apart from a red scarf, the artist is dressed completely in black. His mid-length hair is combed back. He talks enthusiastically about his work, about the exchange with other artists and about how he feels in a good place anywhere in the world where he can create his art. When he was painting at home in Aleppo, bombs sometimes rained down on his neighborhood. "It was a hard time," Agha said. He used to paint by candlelight, often in the knowledge that his neighbors were dying. "I always tried to carry on working, to show that Syria also has a different face." But eventually it became too dangerous and he fled with his family to Turkey.

Around half of all Syrian artists have left the country, Humam Alsalim, an architect from Damascus, estimates. She curates a Facebook page that presents the work of some 500 Syrian artists, including Agha's. The art market has collapsed, and like everything else paint and materials are extremely expensive, she wrote in an email. "Here and there you will find a couple of exhibitions to prove that the art scene is still alive," Alsalim wrote.

The message that Syria is also a land of culture is one that Agha would now like to broadcast from Germany. In his homeland, he was able to make a living from his art and had exhibitions in many Arab countries and in Europe. "Of course I feel homesick," Agha said. He also misses his family, whom he had to leave behind in Istanbul because the journey on to Germany was too perilous. Now he must make a fresh start alone in Germany. His exhibition, which opens Thursday, is a first step. "I do not feel that I am a refugee, but rather I have the feeling that I can make a cultural contribution in Germany," Agha said. The exhibition runs from Thursday to Feb. 21 in Bremen's ART15.
RELATED TOPICS